For someone like me who couldn’t take care of a pet dog – because of studio regulation and space limitations as well as my inability to commit to take care, I find my temporary refuge in pet cafes.

My first experience was an accidental one in Korea a few years back – in a place called Bau House. Despite dogs’ general dislike for me, it was such a memorable experience that I did it again – luckily without having to go back abroad as Manila has been catching on the fun of having dog and cat cafes. My most recent visit is to a joint pet cafe of dogs and Bengal cats – a place I discovered as it is near my favorite beer place in Cubao Expo.

WOLF AND BEAR CAFE is an extension of the also recently opened cat cafe in Cubao called Bengal Brews. As far as I know, it is also the second dog cafe in Manila (one being Barkin’ Blends in Katipunan).

The cafe is located in the ground floor of Manhattan Parkview in Cubao, within walking distance from malls, a supermarket and as mentioned earlier, Cubao Expo.

As in most pet cafes, they charge an entrance fee which usually includes a drink. For Wolf and Bear, 299 pesos gets one in to both dog and cat cafes for an hour with a free drink. An additional 100 pesos applies to an extra hour and on top of drink, includes food as well. What I personally love about the place is that they serve beer, though I personally was not able to try because I was there earlier than their window for beer at 8PM onwards.

Prior to entry, there is of course the usual sanitation procedure. Shoes are also left outside and guests are encouraged to wear house slippers provided. I was told socks need to be worn which I already have on so it was not a problem. What I am not sure of is how they deal with guests who come in sockless.

Entrance to the dog cafe is via the cat cafe which as soon as I get passed in, I was immediately greeted by two pugs and a big dog (whose breed I don’t know, boo). Compared to one in Katipunan where there was immediate chaos upon entry, dogs here are generally ‘behaved’ – though I suppose it had to do with them being fewer in number and also due to how the cafe was set up.

The ground floor is divided  into sections – the one by the entrance door where there is a table and a couch while the one on the left is of Arctic-inspired atmosphere where about 10 dogs are housed in pens. With supervision from the crew, guests are allowed to enter the pens (except for one where the alpha dog is because according to the staff, that dog tends to be jealous). The interaction was a little less natural than having to play with them running around but this kind of set-up probably has to do with the nature of the dogs.

At the time I was there, most of the dogs were not sleeping but they were in the relaxed mode of just lying on the floor – maybe lazy or sleepy or just being themselves. I was with a few other guests that time so there was no need to crowd ourselves in each of the pens. I could actually be with as many dogs I want but I chose not to because dogs seem to be wanting some privacy (or at least that was how it seemed to me). 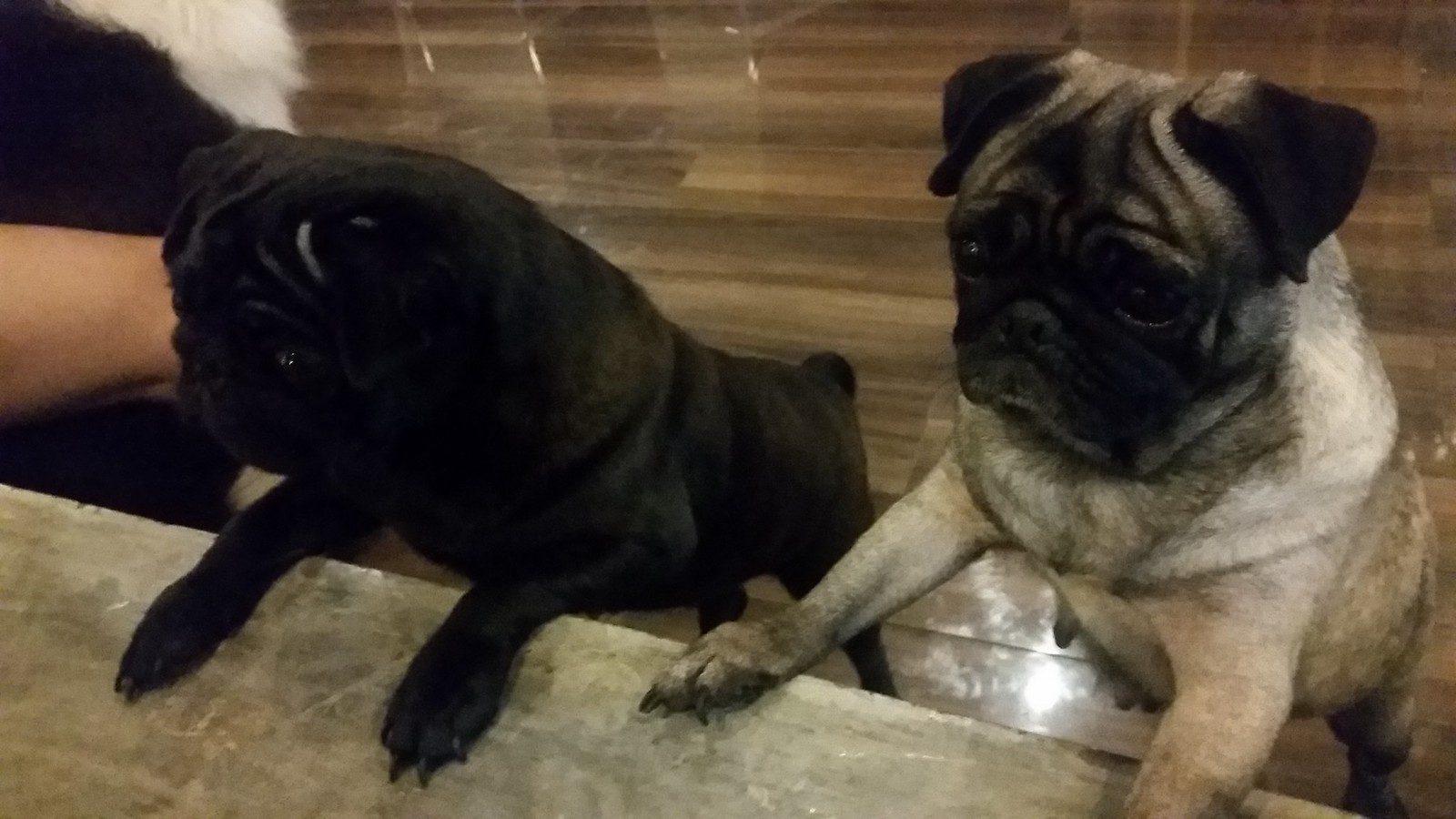 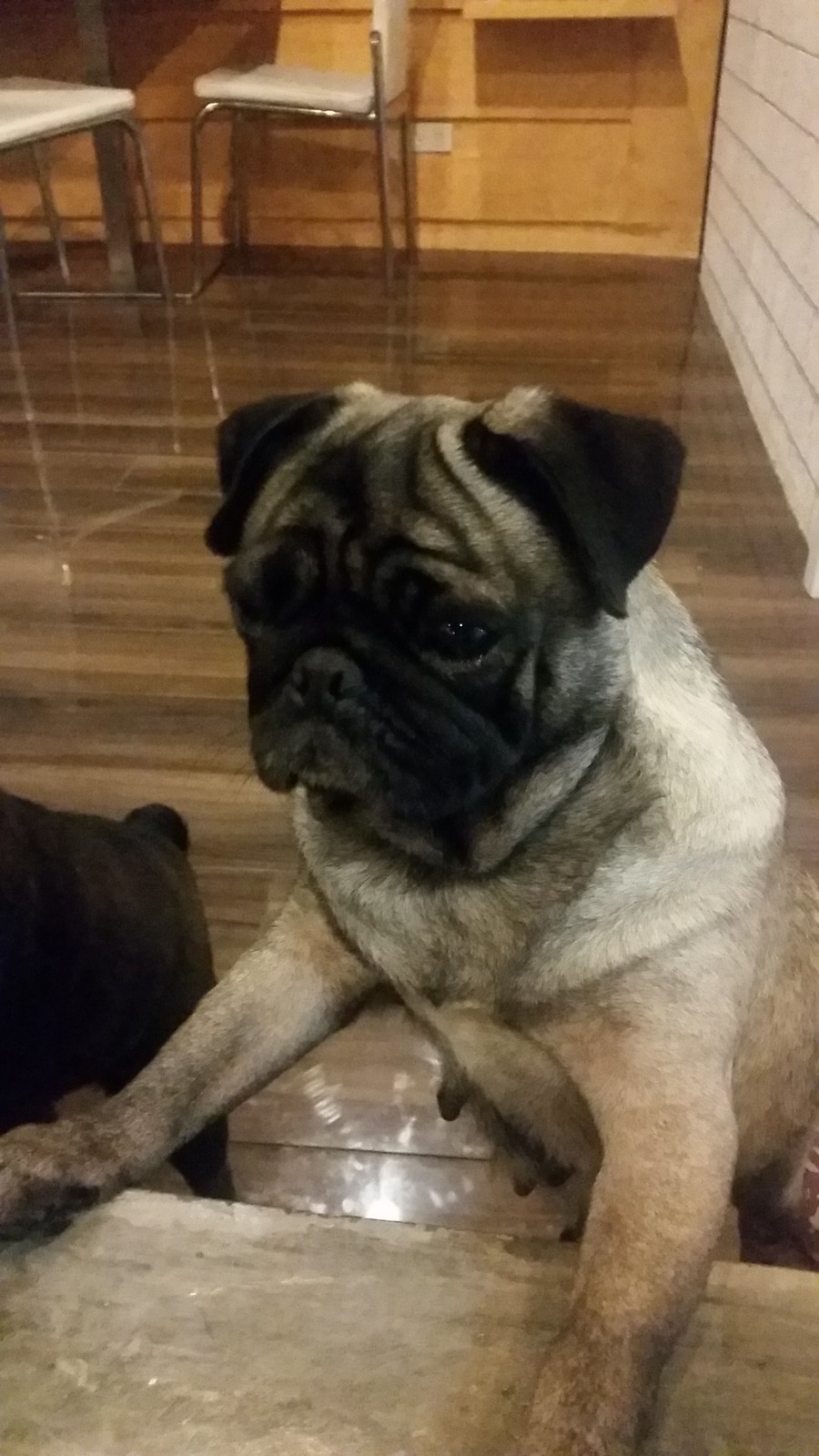 This baby doesn’t look so happy but I hope he is! 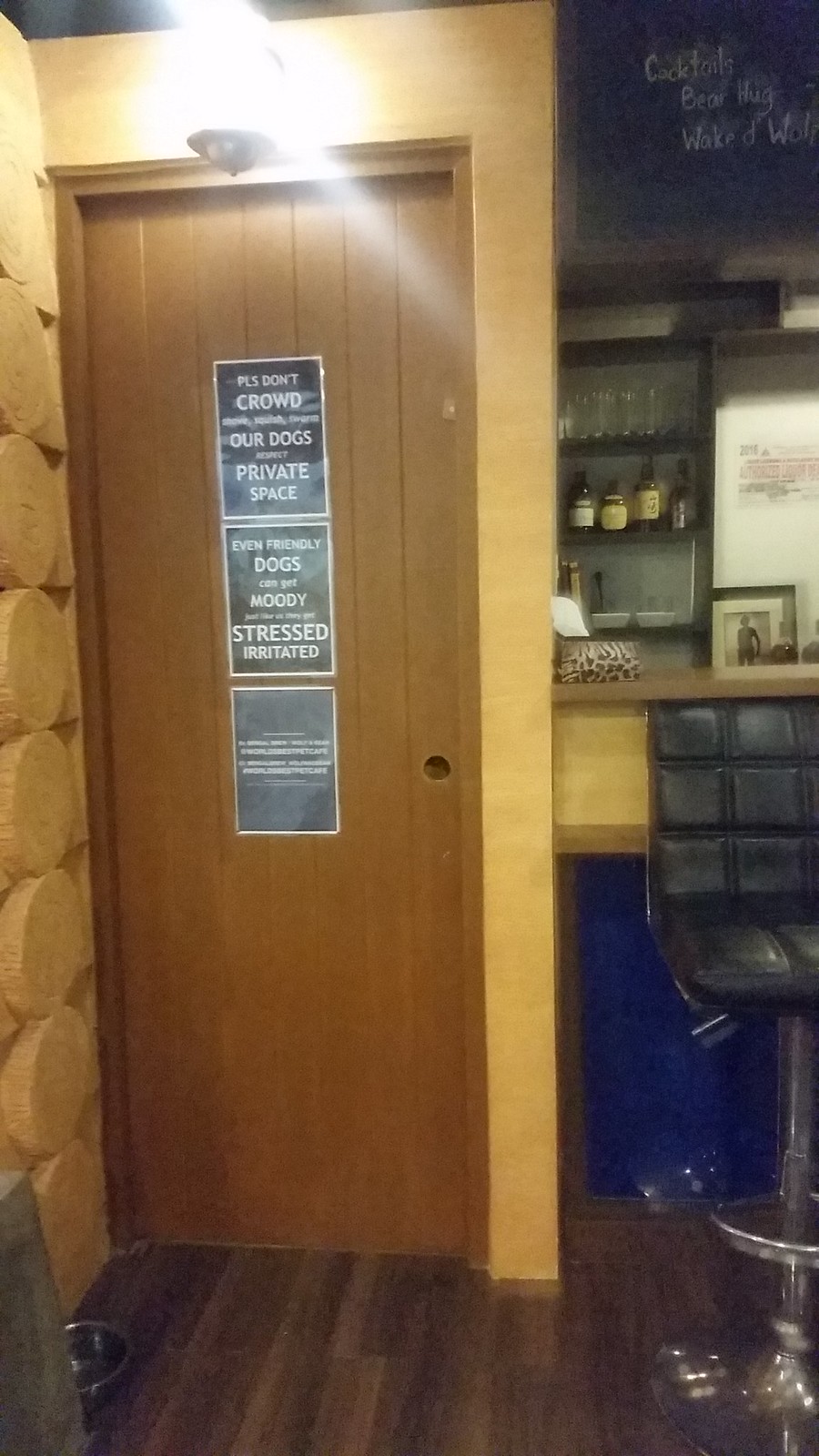 Of course, they get bitchin’ too 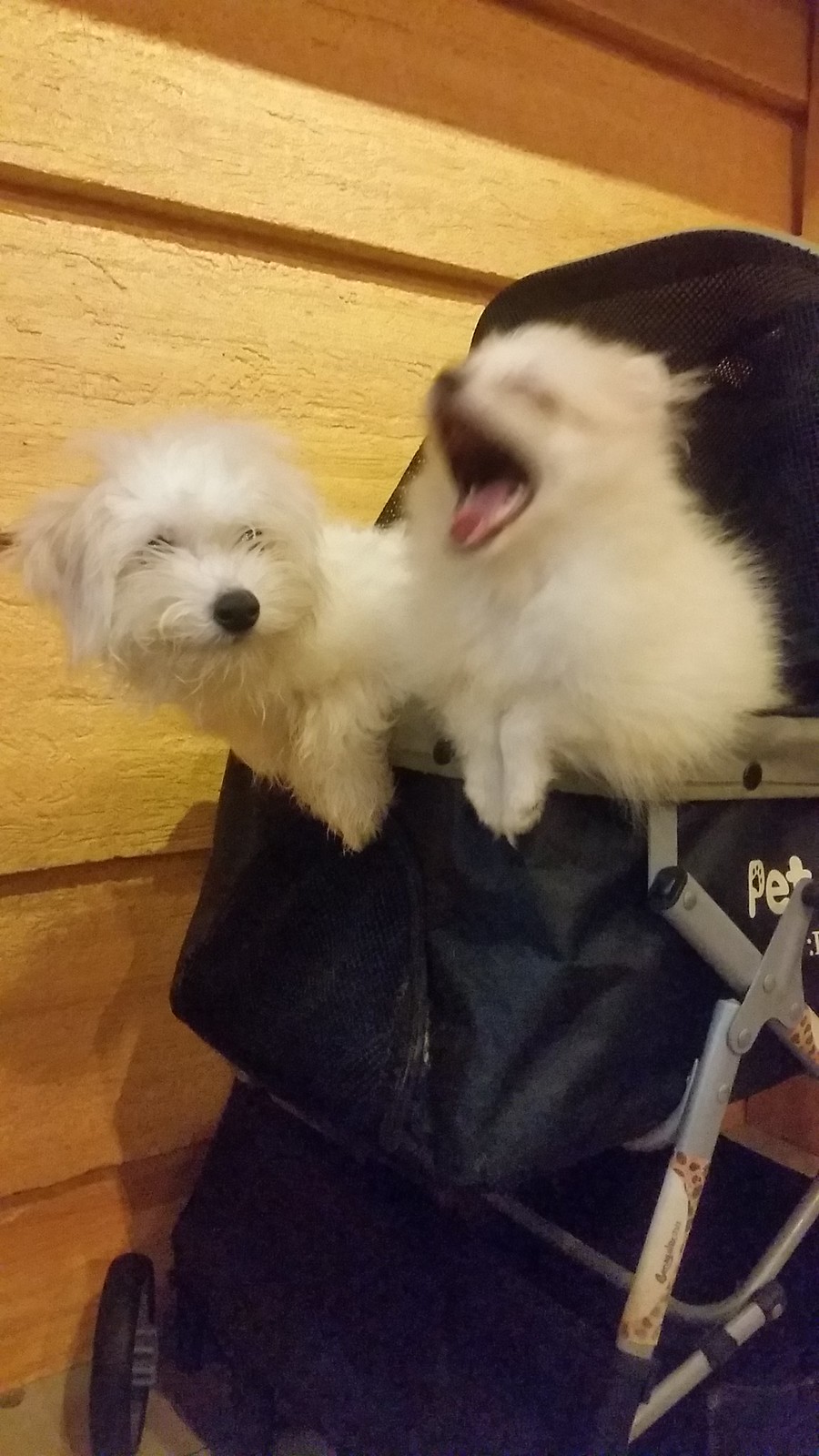 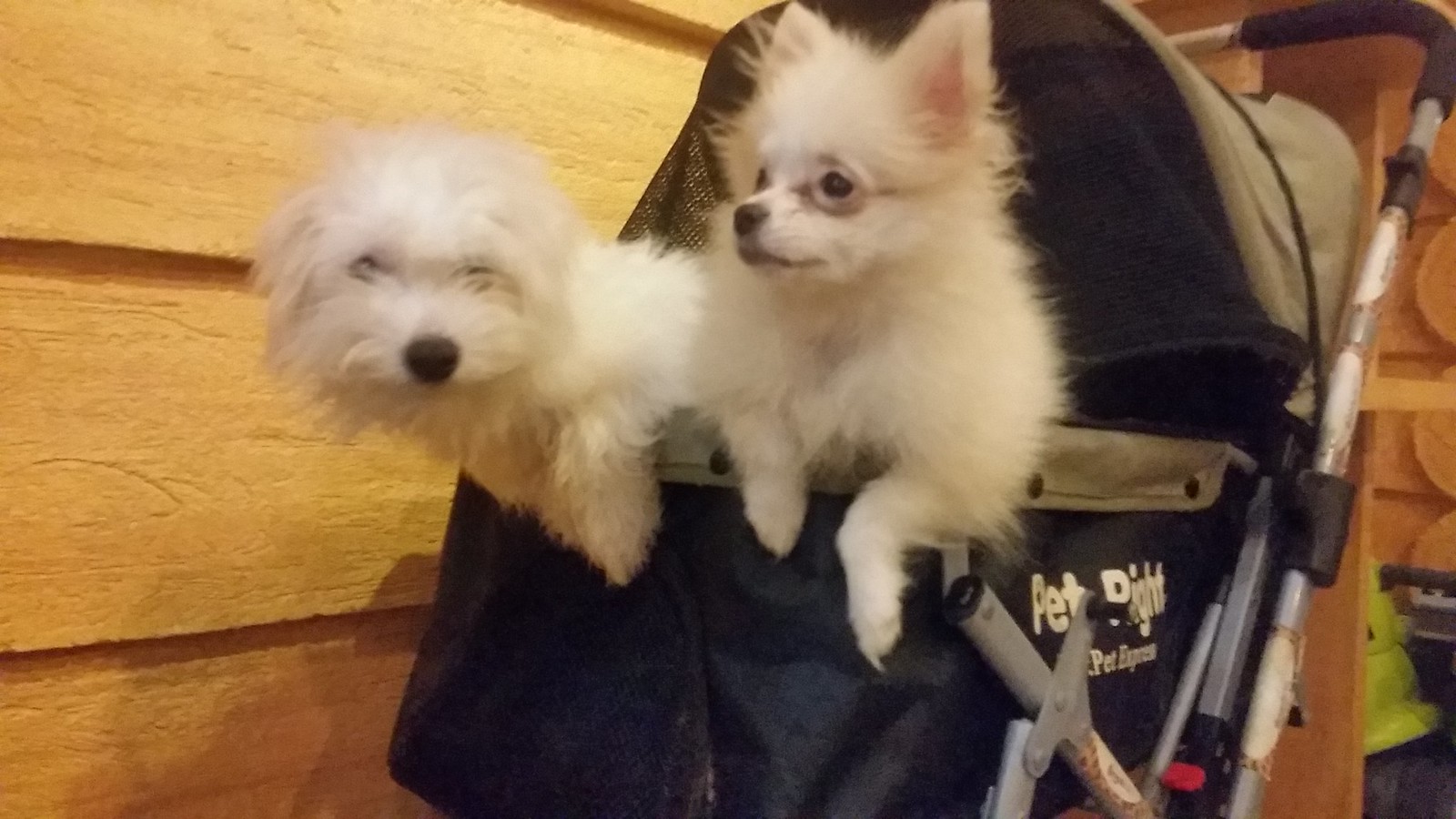 Of course, they get bitchin’ too

The cafe is loft-type with the upper storey with more tables and a big area for play. There are less than 10 dogs in this area – mostly small ones. 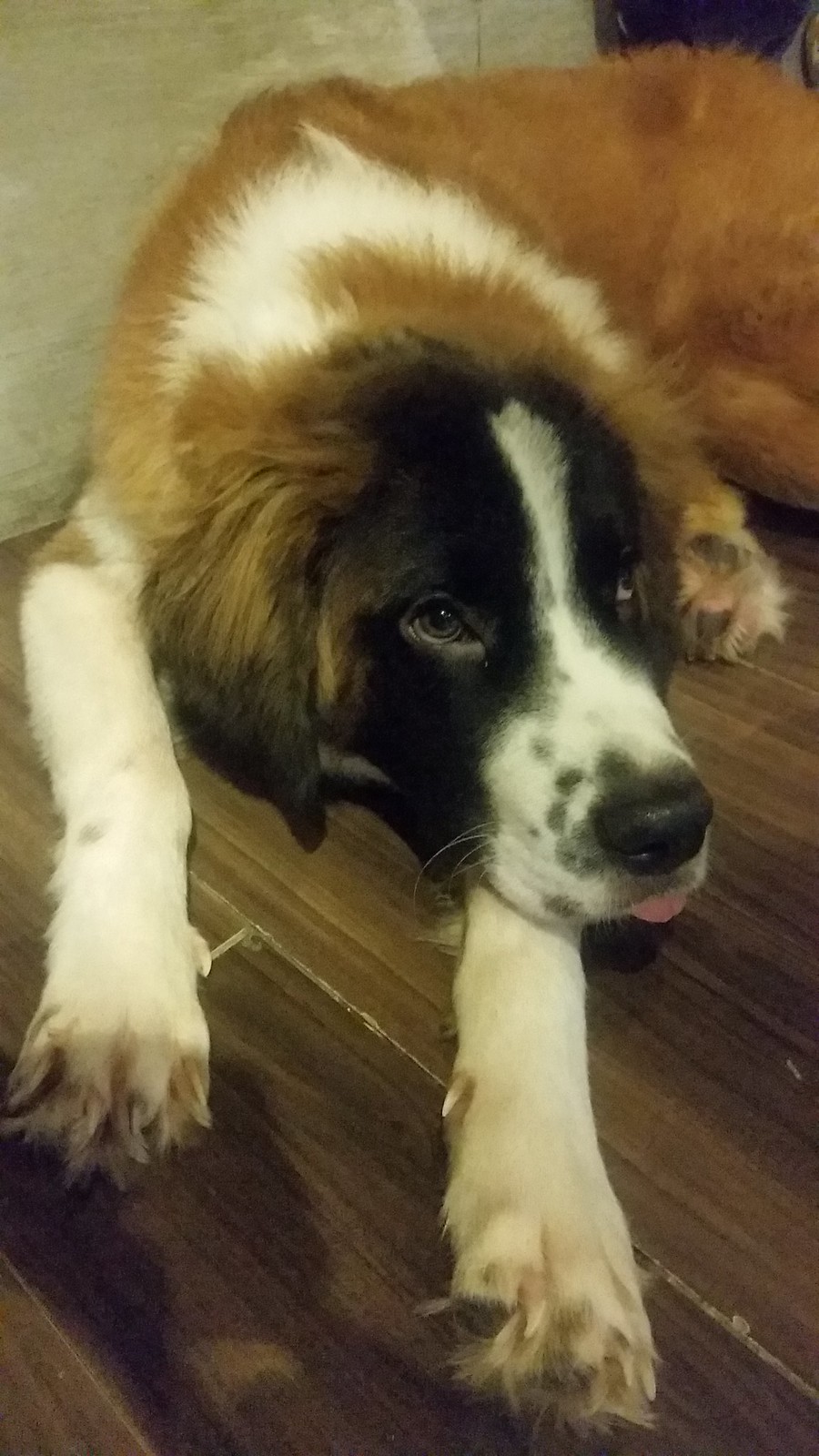 This only one huggable giant on the upper storey 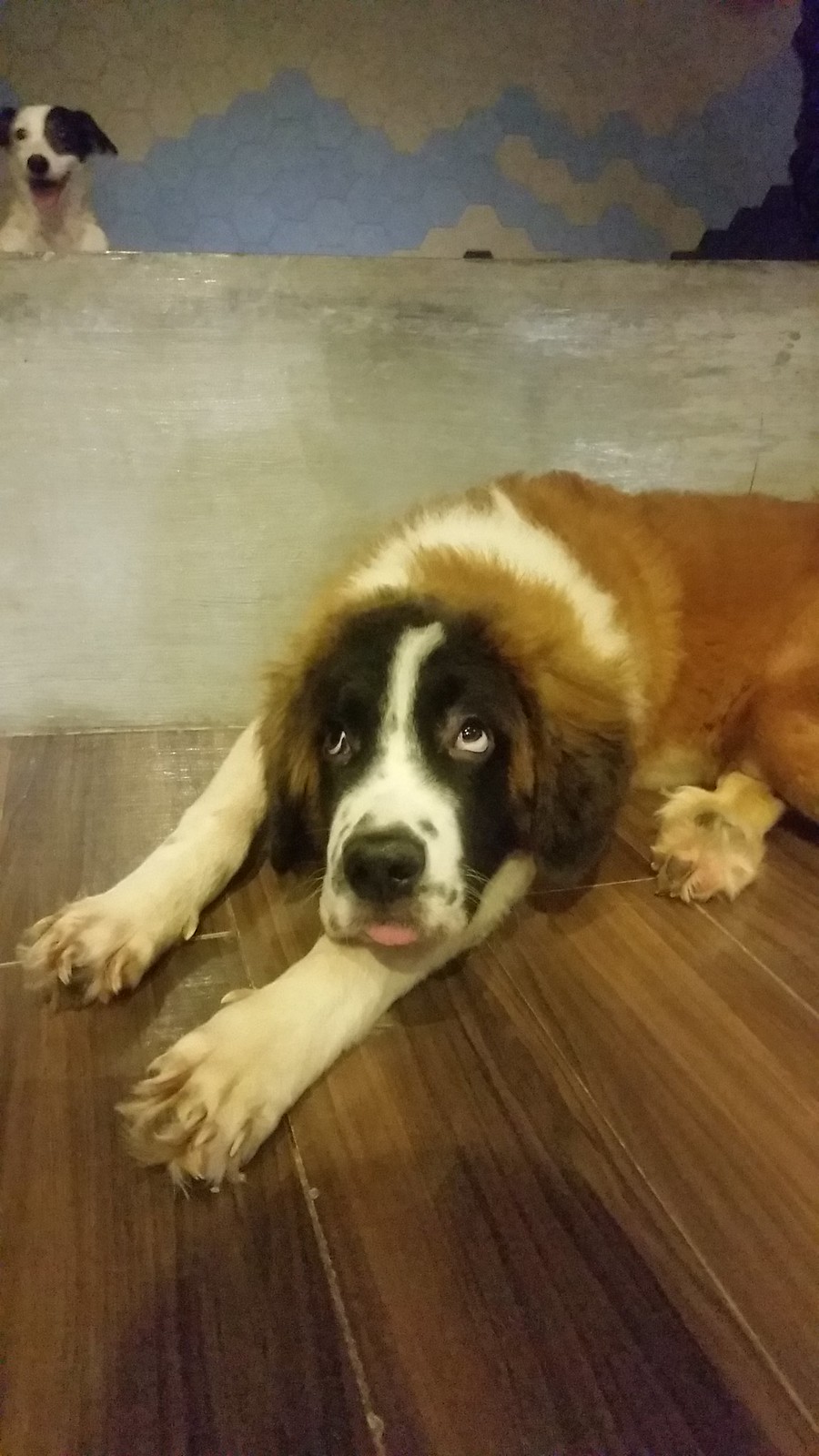 … and look at the cutest photobomber. 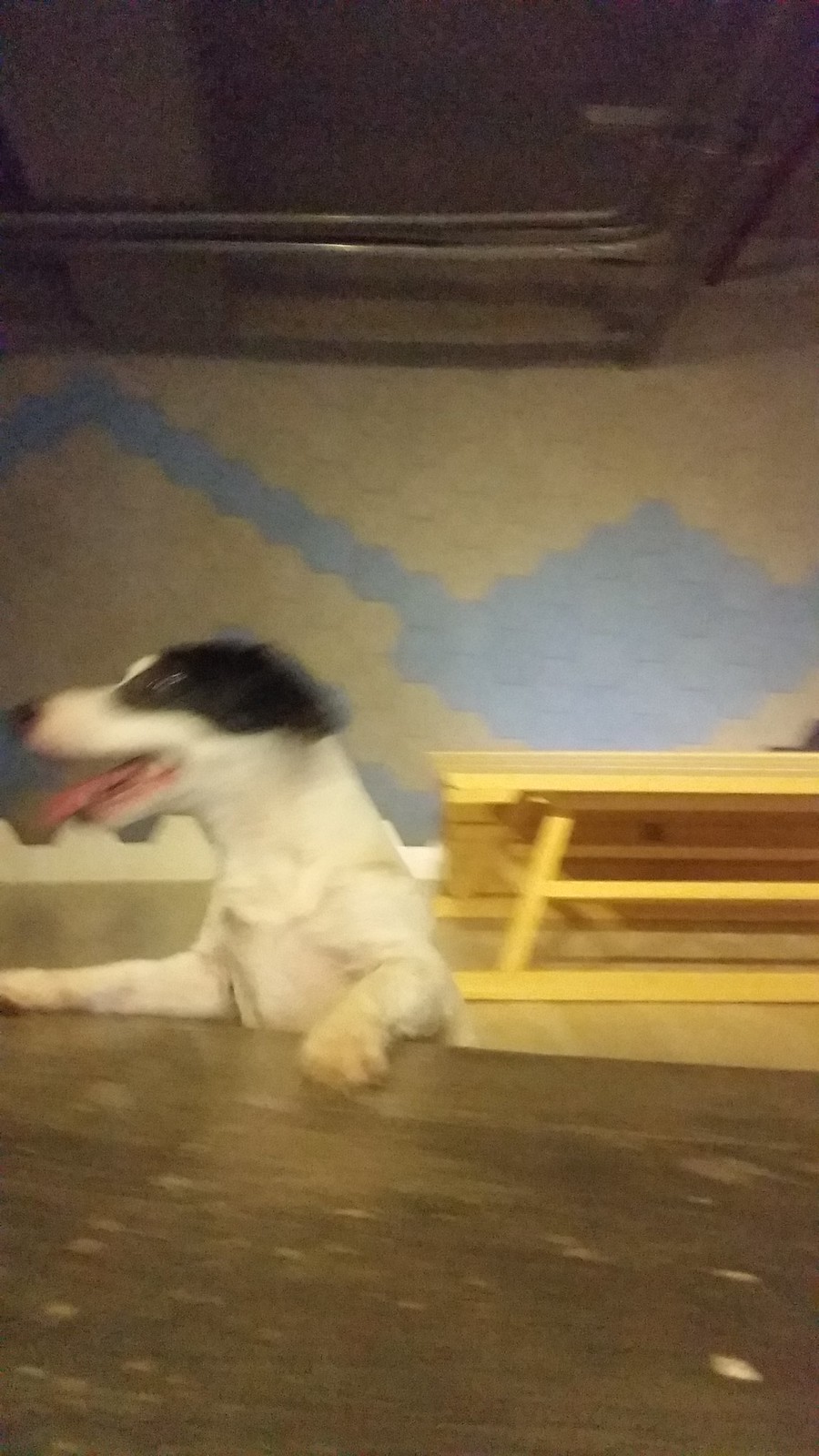 .. this photobomber who just could not not move 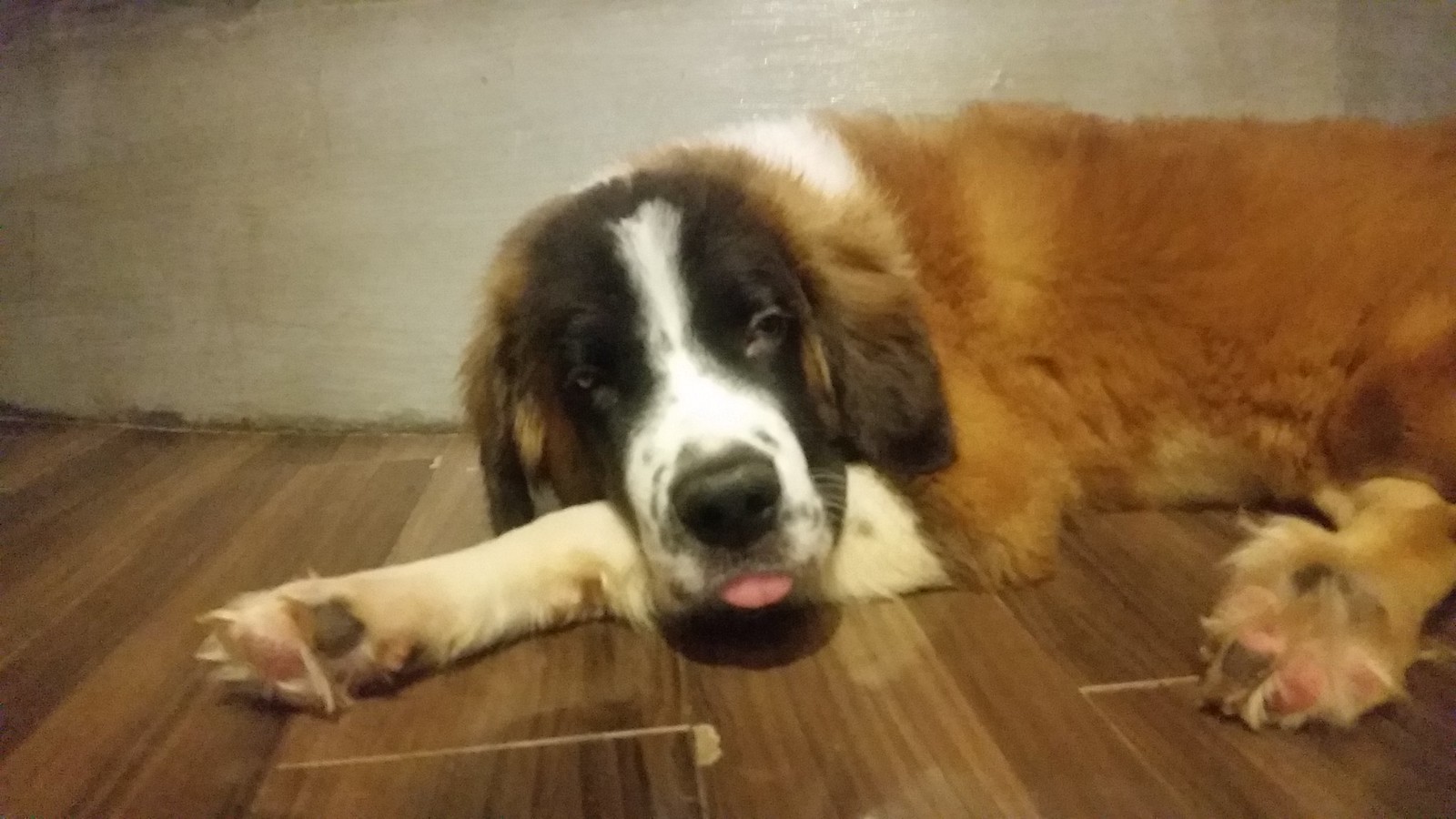 … while again, this one remains cool 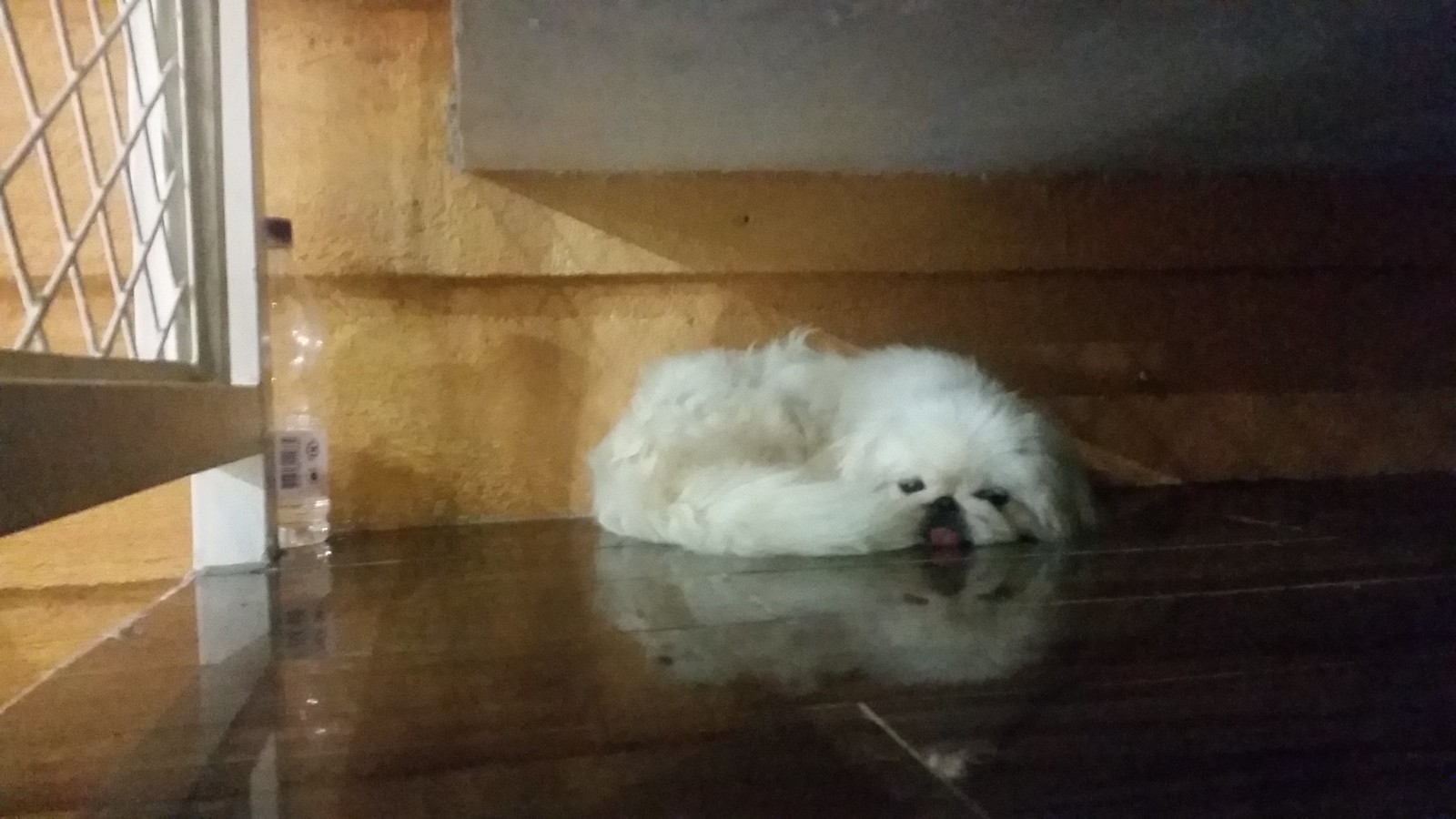 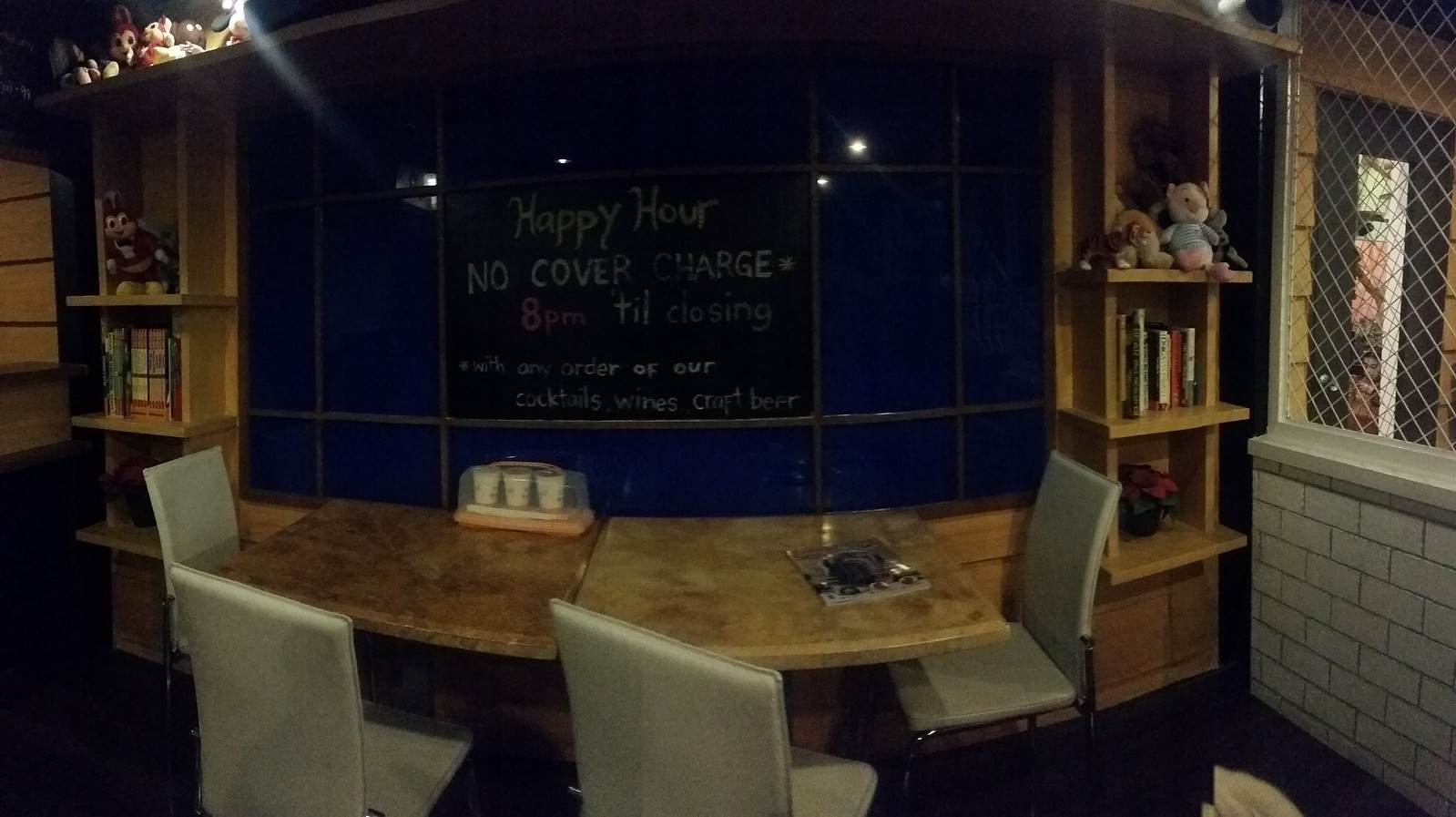 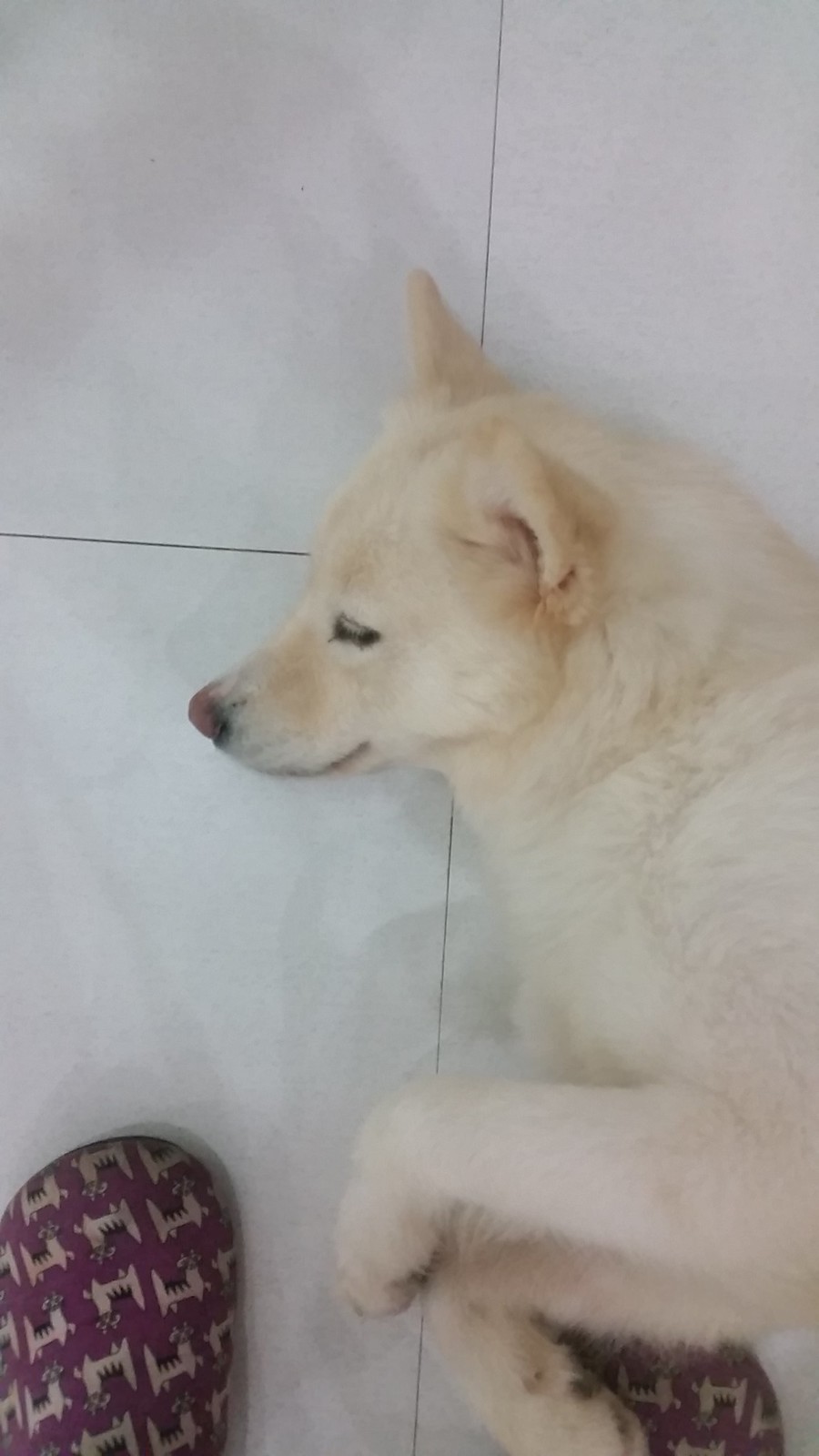 One of the dogs in the Arctic area 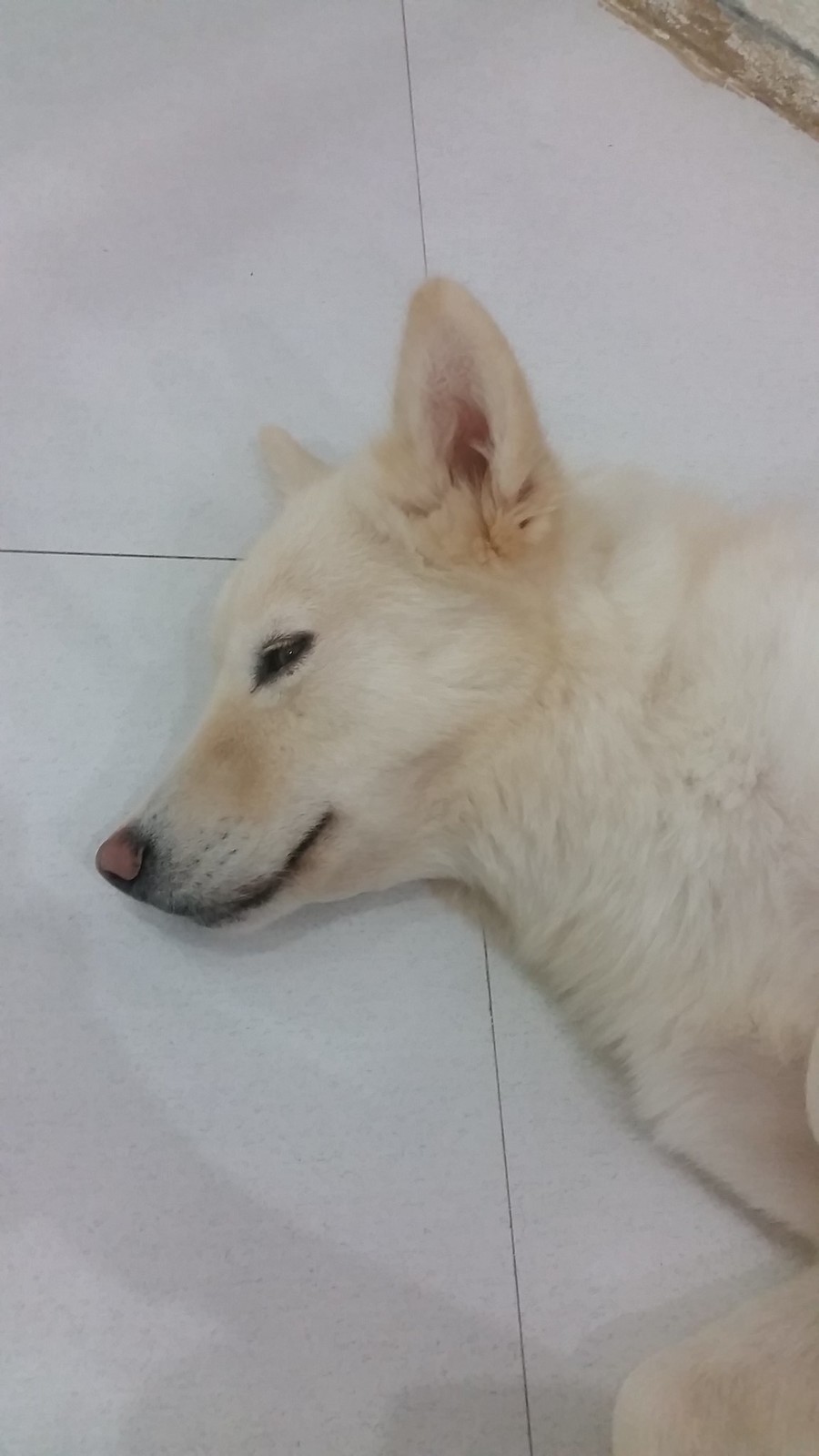 A pretty one at that 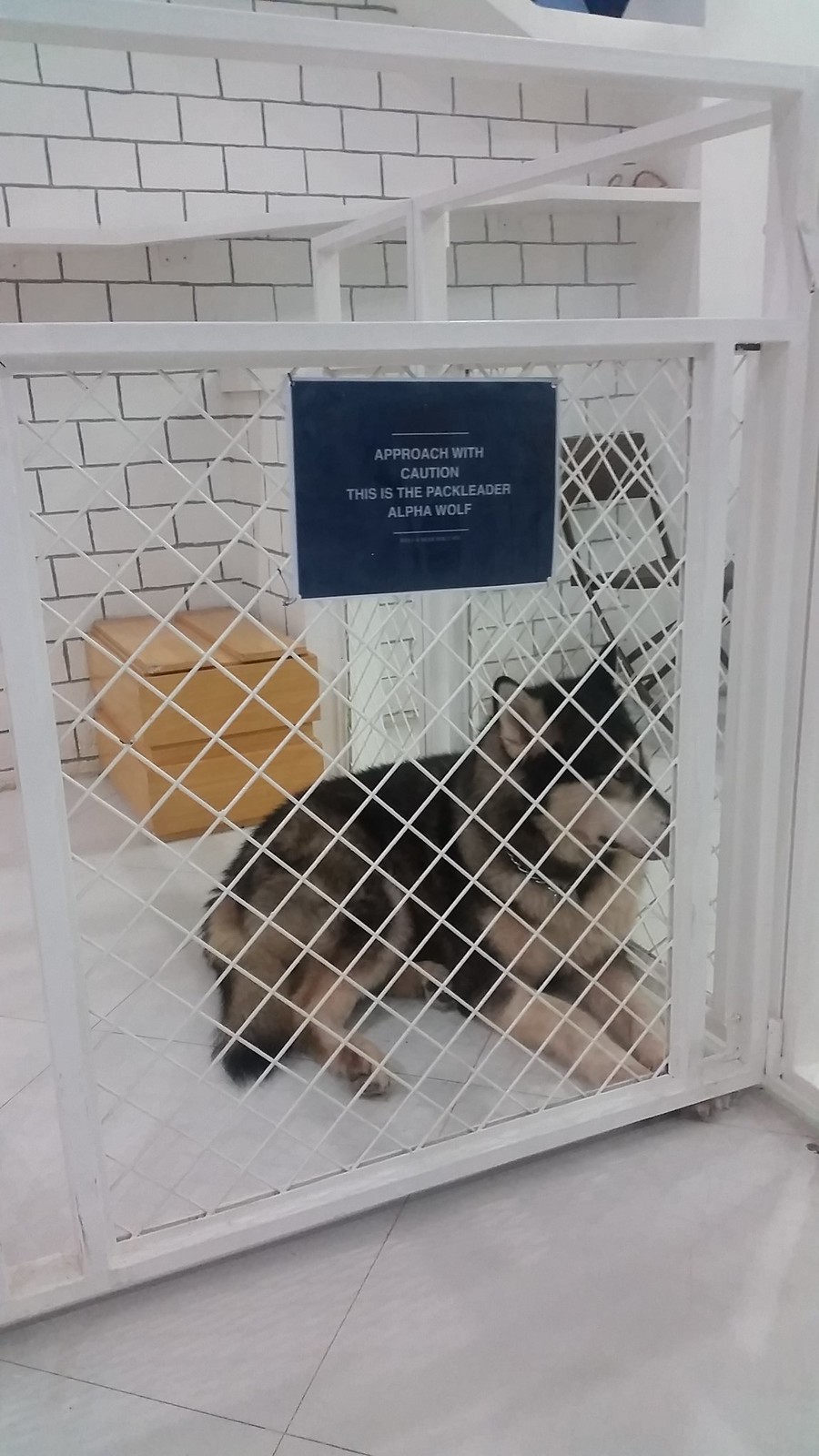 This apparently a jealous one

I kept on going back and forth the lower and upper storeys trying my luck at who will be willing to be with me. 😀 A challenge, of course but the friendliest to me would have to be the big dog downstairs and the brown pug. (Argh, and too bad I didn’t ask for their names). 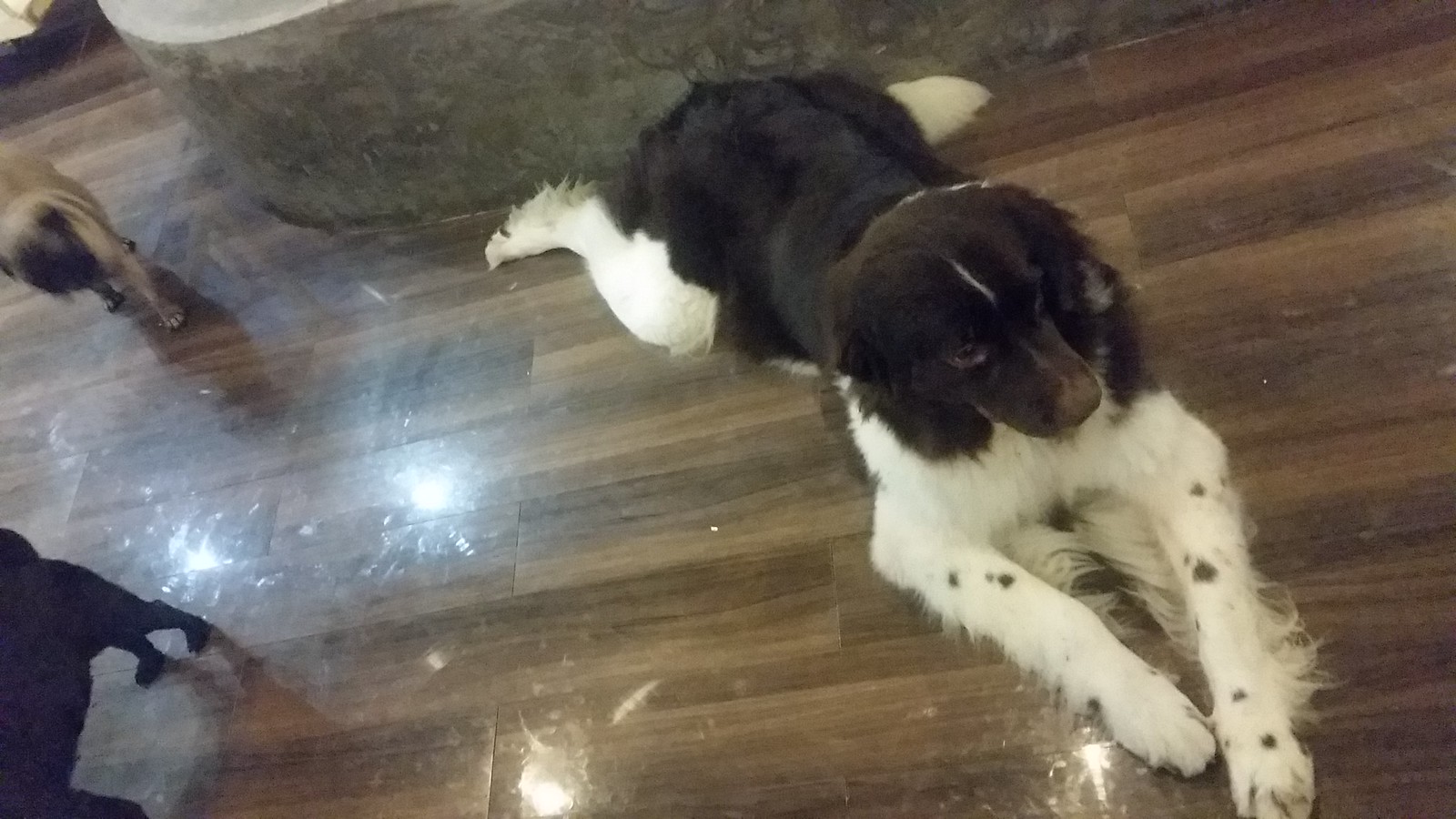 This one closest to nice to me 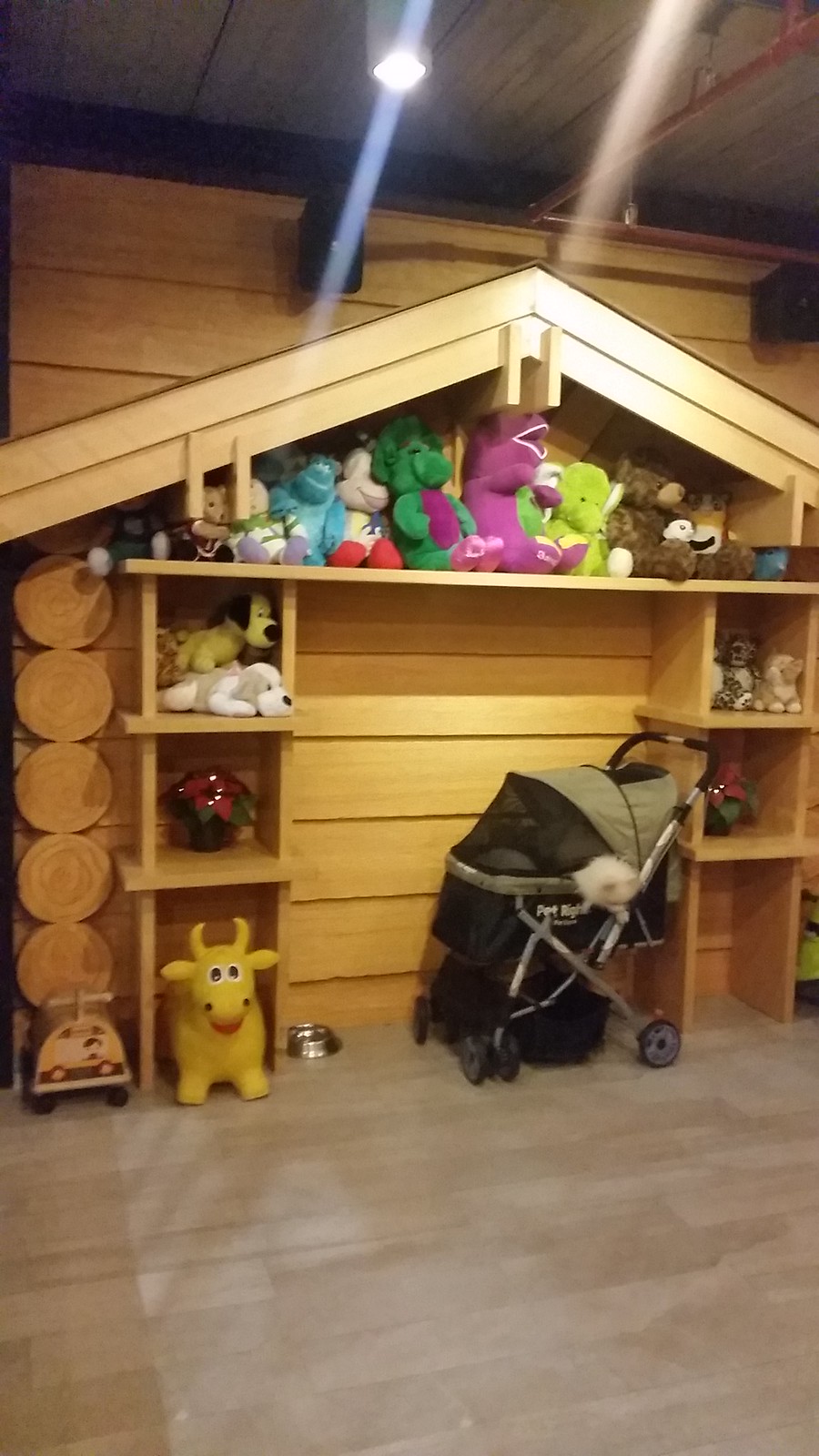 Spot the real one

When I went back again to the upper storey, almost all dogs were sleeping as there were also no more guests that time. 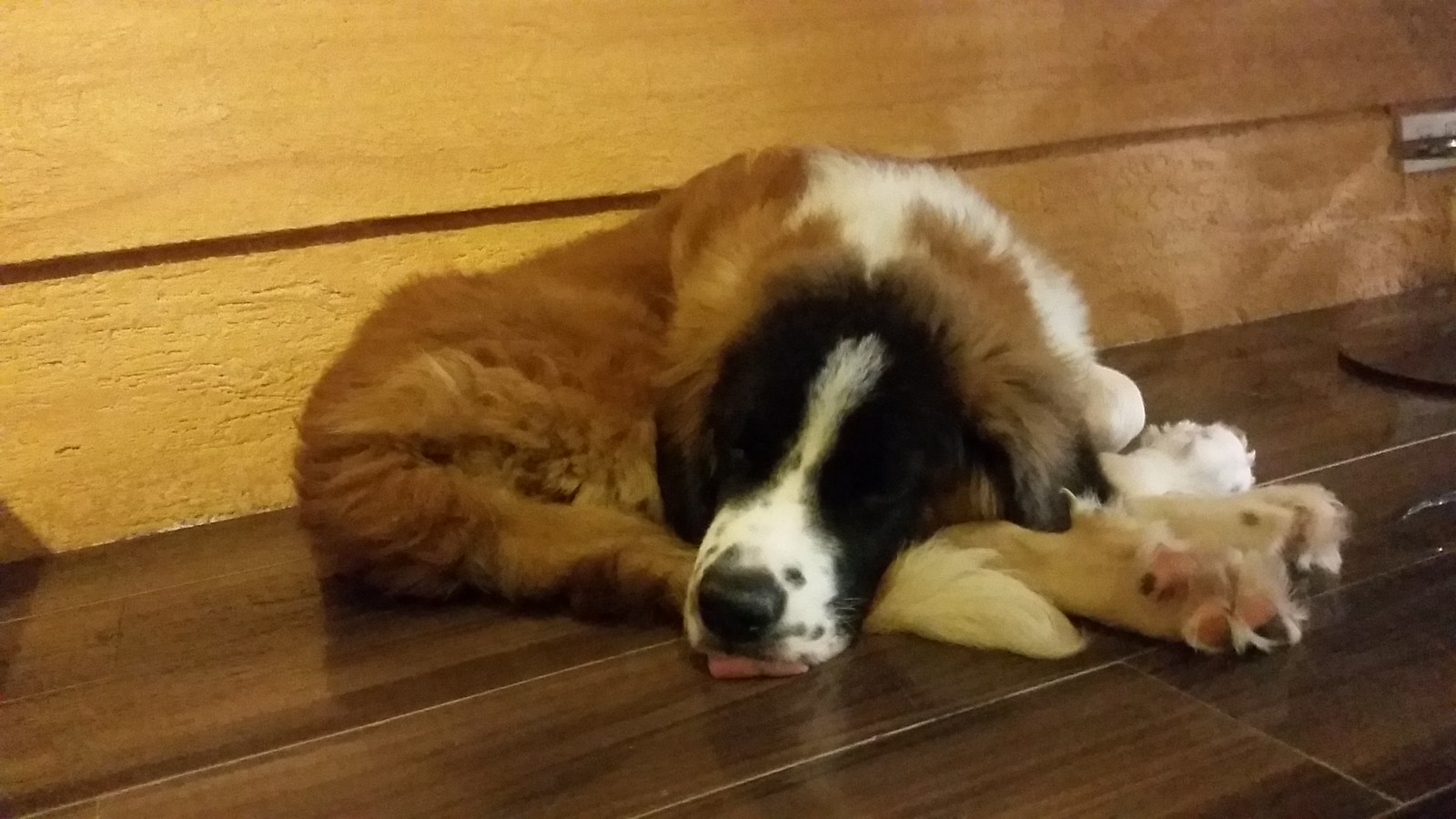 Also zzZZ time for these two 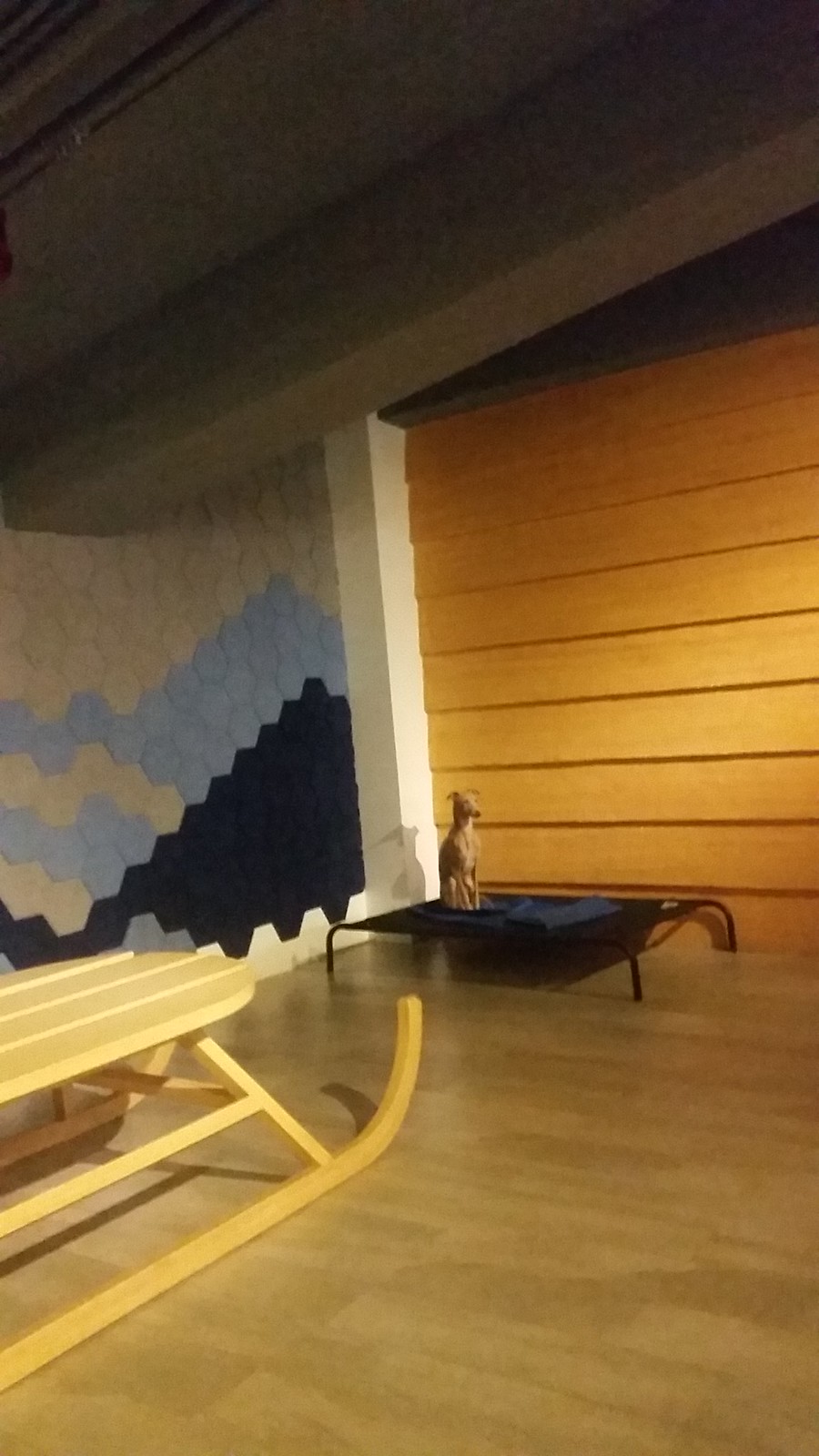 While this one stays up 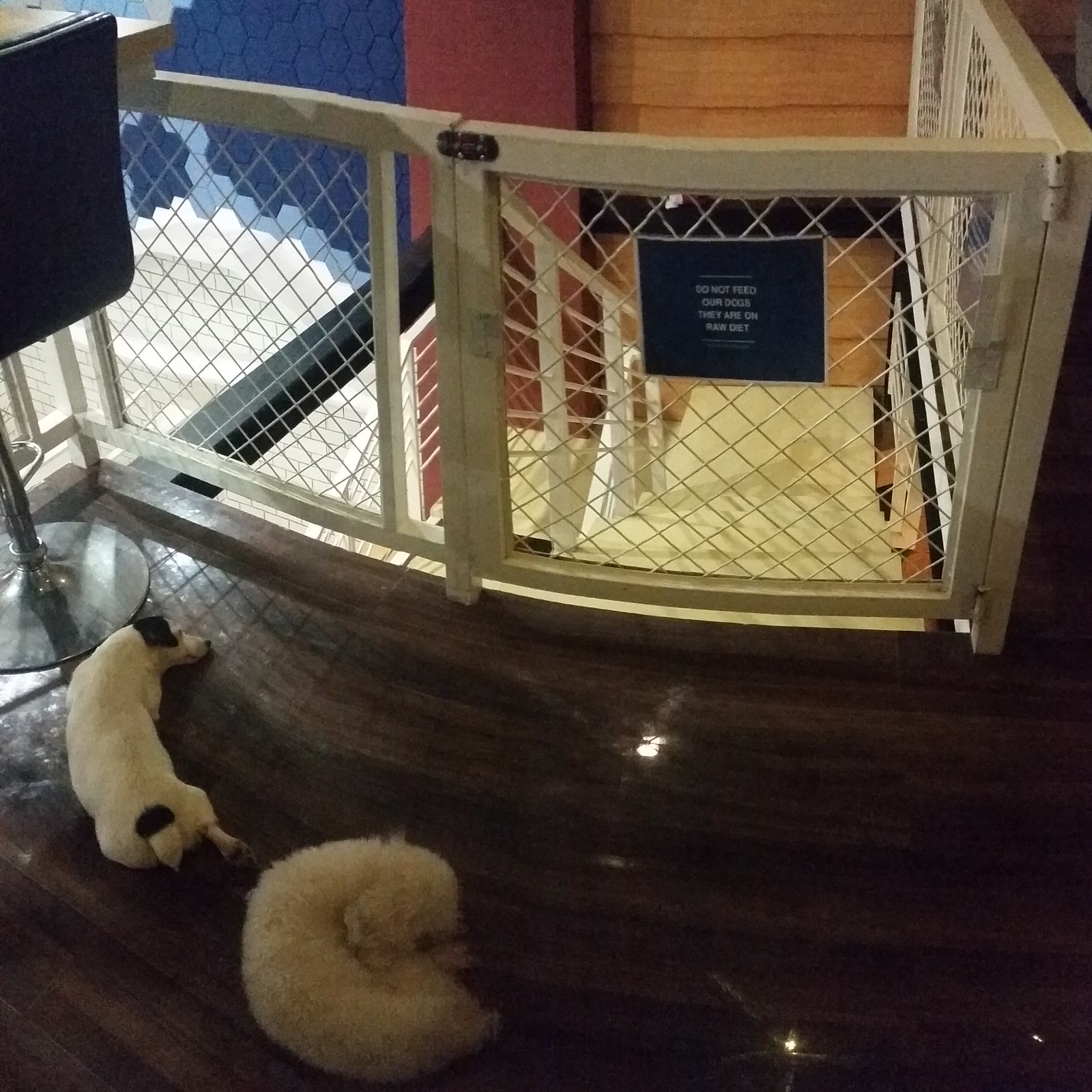 Tired from being carried

A few minutes before leaving, I tried to just sit down. One of the crew may have noticed that I was going solo that he offered to take a photo with one of the dogs. And once it started, it also kicked off my attempts at decent selfies. 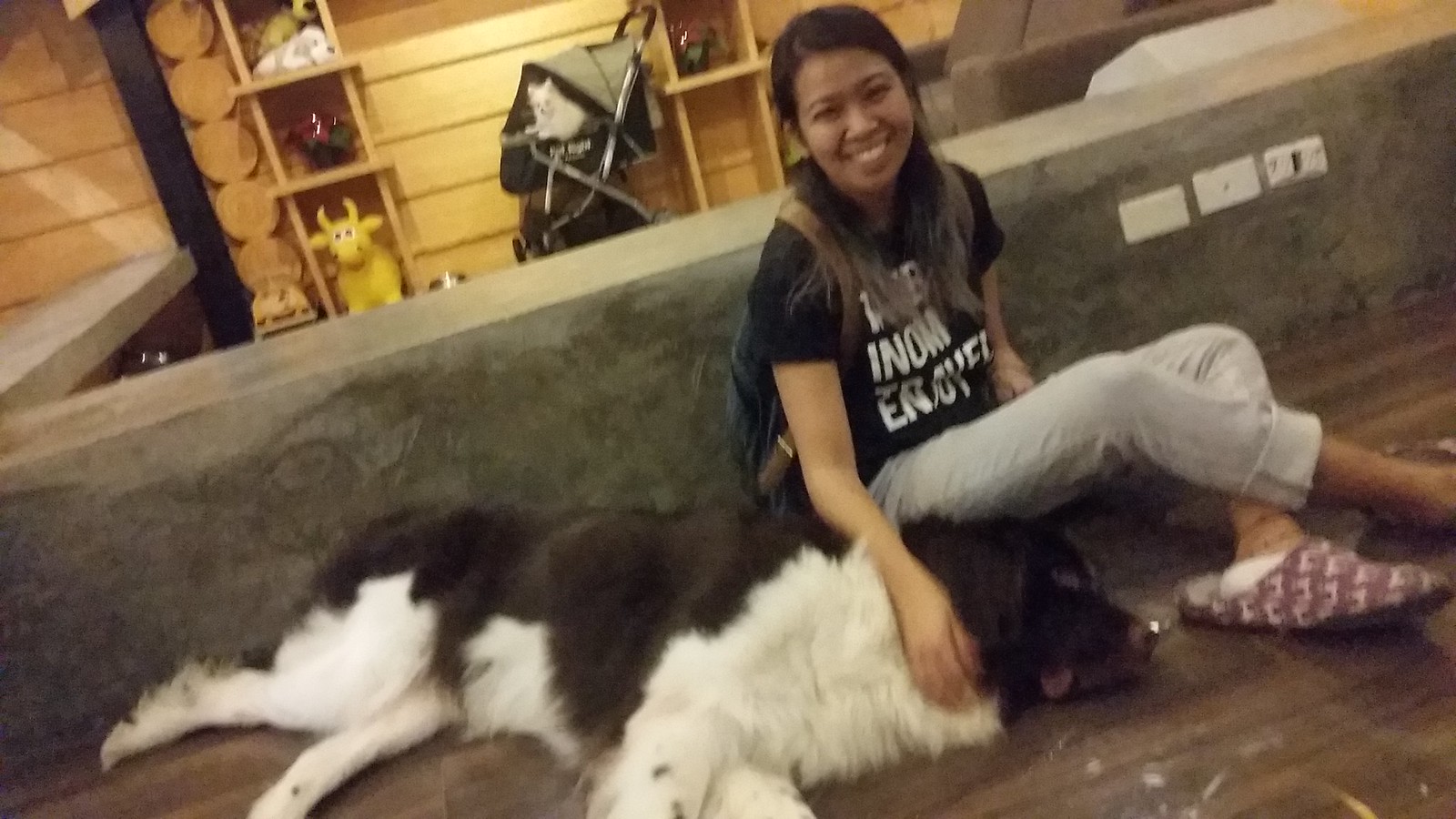 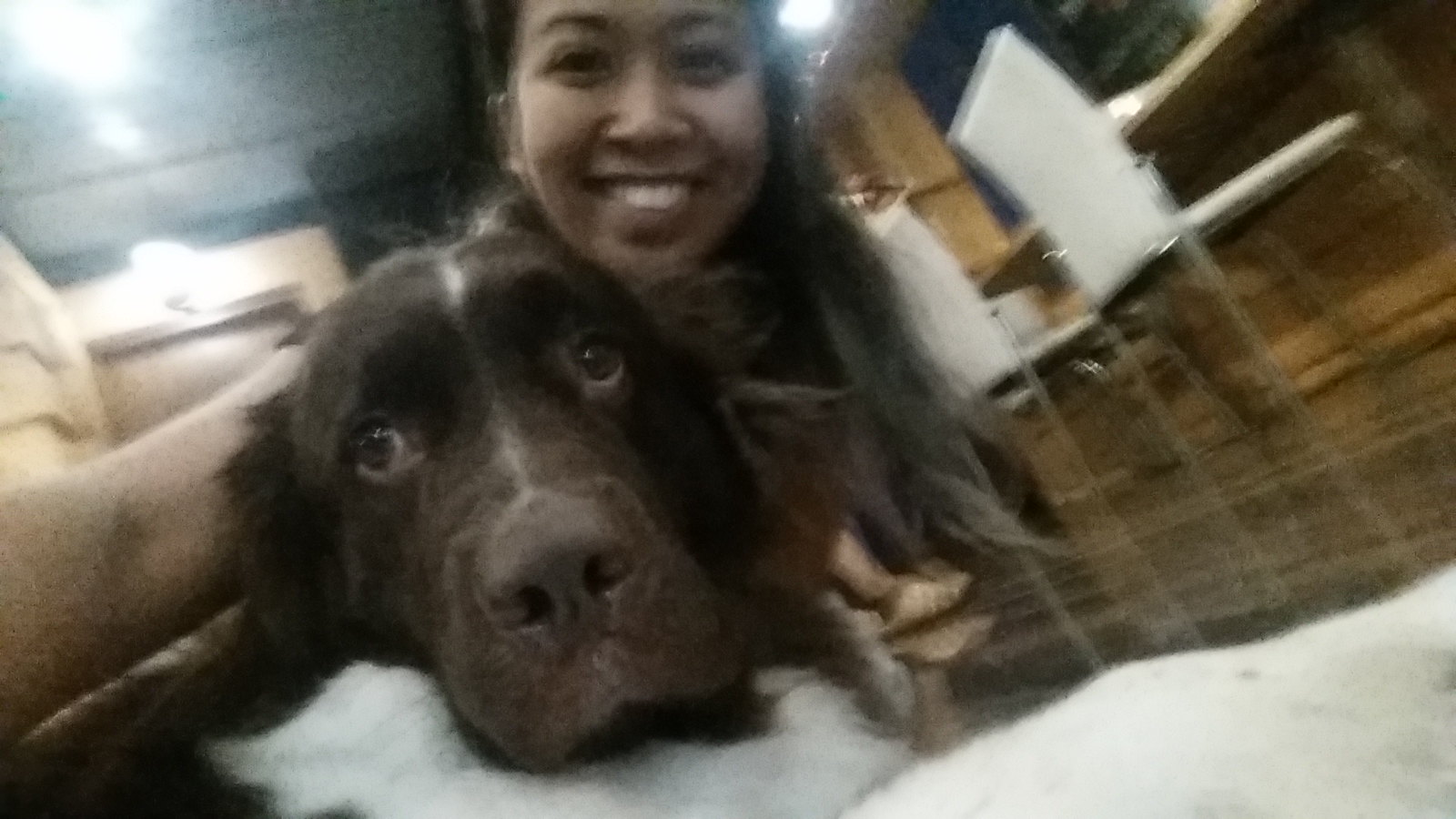 Awww. He does not seem to look that happy 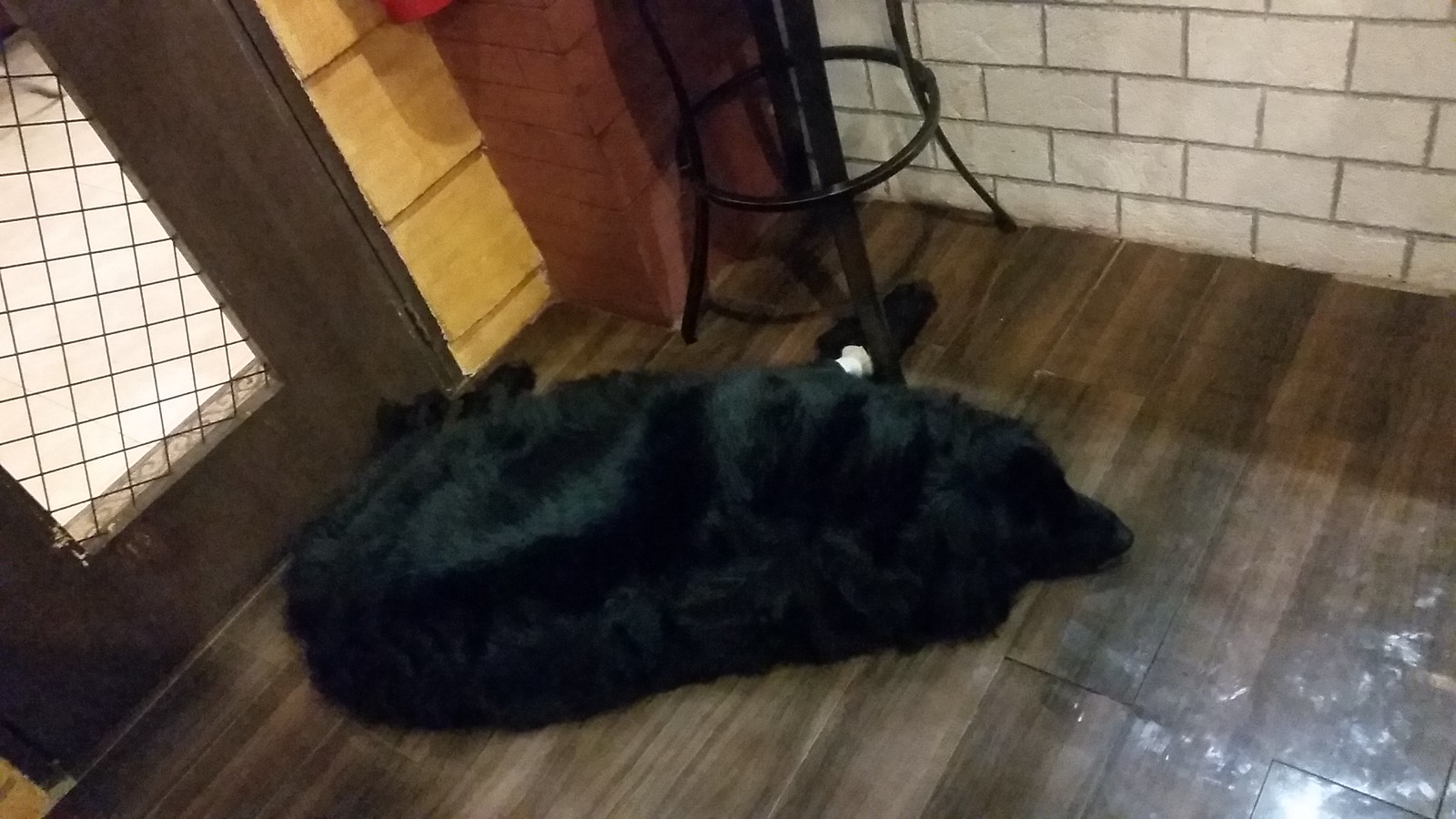 My visit to the cafe was brief and I wish the dogs could have been more playful. I am not sure whether it has something to do with the time of day that I was there (early evening) so I hope I get to go back just to see.

How to get there and other practical details

From MRT Cubao Station, one may walk through Gateway Mall, take the exit beside Araneta Coliseum (street facing Shopwise) then walk towards the left. Turn right on the first street right before main road Aurora Boulevard. Walk should take around 5-10 minutes.

For jeepneys coming from Manila, ride one going to Cubao then go down on its final destination (a few meters after Gateway mall, with a Mercury drugstore as landmark). From Aurora Boulevard, walk towards the right then turn left on the first street.

Cafe is open Mondays to Sundays (Mon-Thu from 11AM-11PM then an hour later for the rest of the week). The place also offers merchandise as souvenirs.

For more details and guest photos, they have an official Facebook page : Bengal Brew / Wolf & Bear.