It was similar to one destinationless afternoon in Penang wherein after cuteness overload in craft stalls and shops in Huashan Park, I just had to keep on walking which led me to try one of the city’s street food, experience the MRT in its busyness, discover more installations in another factory-turned-park until end of daytime spent braving the cold while finishing my beer homeless-style.

Taiwan is known for its street food (hello, stinky tofu!) but a food trip is not on my list (with the exception of some dumpling I cannot forget the first time I was there). Anyhoo, as such, this one was just a random discovery that afternoon. I was walking in this electronics district when I saw these people lining up for a  stall. I was not that hungry but being both curious and a sausage fan, I did try. 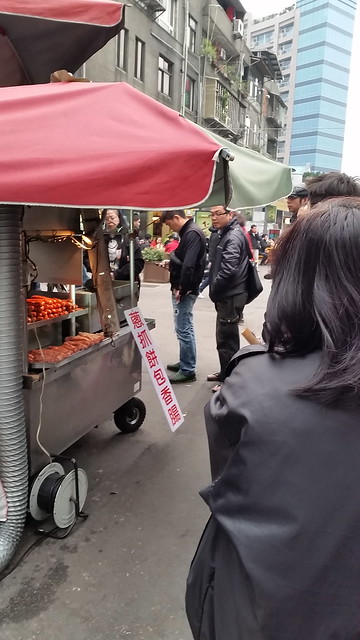 Hmm. Why were all they wearing black? 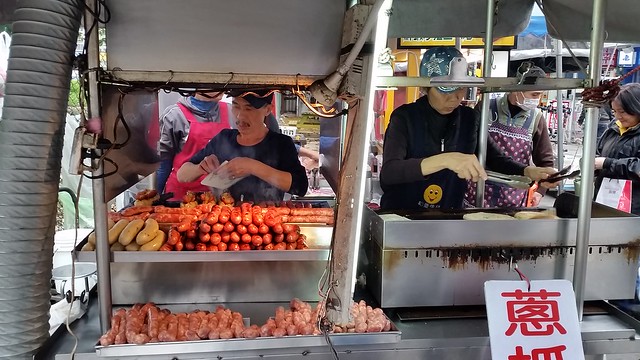 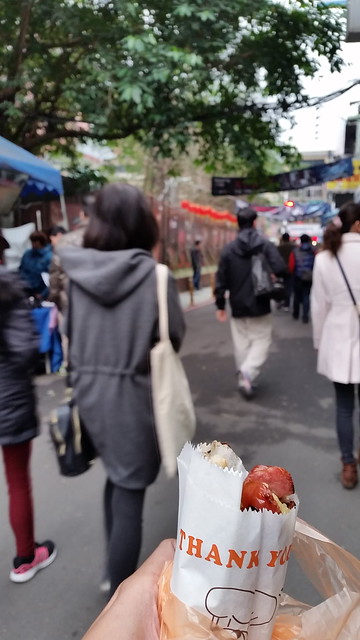 So the verdict? It was worth the try but its filling seemed to have some bitter taste

* Experienced the MRT in one of its busiest

Coming from a country where this is the normal during most critical times of day, this is easy peasy. What I found interesting though is that this is one of the few times when I have experienced this abroad. 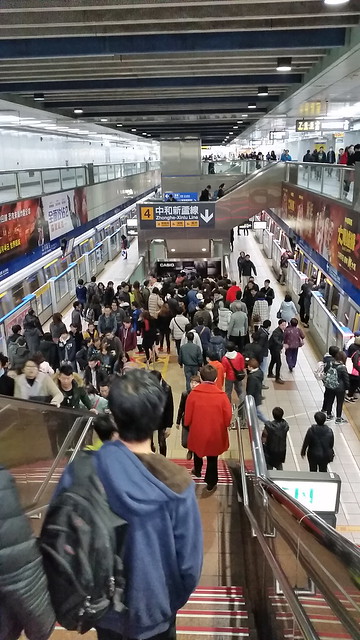 Off to the mob

* Caught an iconic skyscraper by surprise

It is typical for cities to have a tall structure that is interestingly visible from different parts of city (like the one in Seoul) but what is more interesting with what TAIPEI 101 used to be the tallest building in the world in 2004 until it lost its title to one in Dubai a few years later. 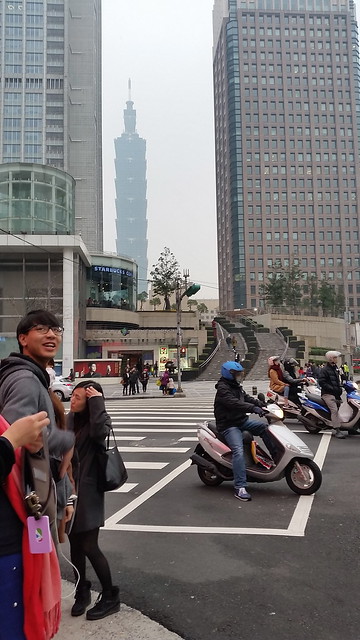 I was taking a photo of the tower but look at that man’s smile!

(Makes me wonder what he was looking at)

* Drooled over a closed shop of ‘awesome burger’

At that time I thought the burger shop was closed but looking at the photo now, it looks like I just didn’t look hard enough. Tsk. Maybe next time then. At least I have the street marker here. 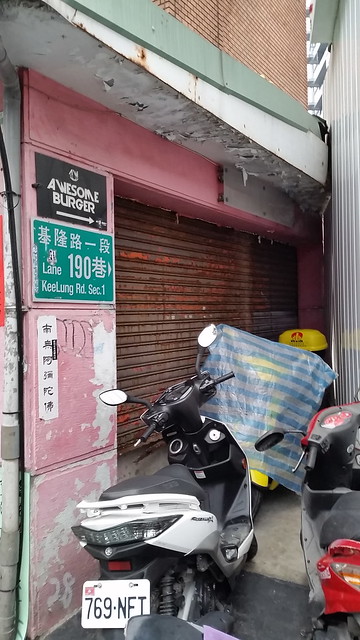 * Found more cute stuff, as if what were in Huashan were not enough

Local craft industry in Taipei seemed bustling as while walking, I discovered another shop of handmade pouches and more postcards! 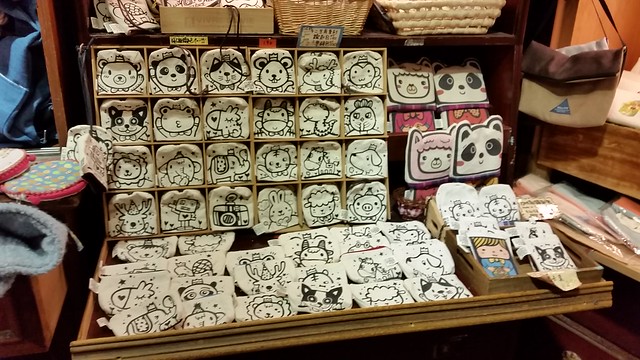 ‘Which animal are you?’ kind of day 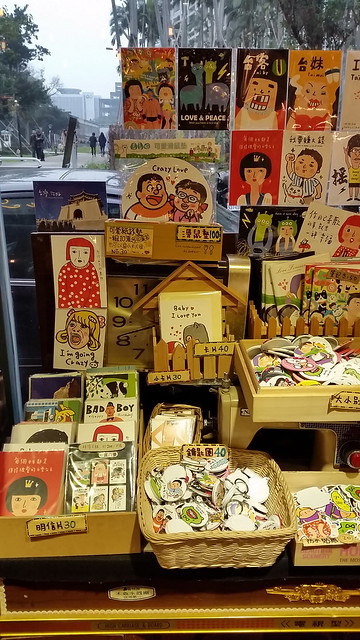 of similar style as those # lovewins – inspired postcards in Huashan

It was already late afternoon when I was in SONGSHAN CULTURAL AND CREATIVE PARK. It was starting to get extra chilly and while I could have chosen to get inside the indoor exhibits, I preferred to walk around and find installations in several spots on the park. 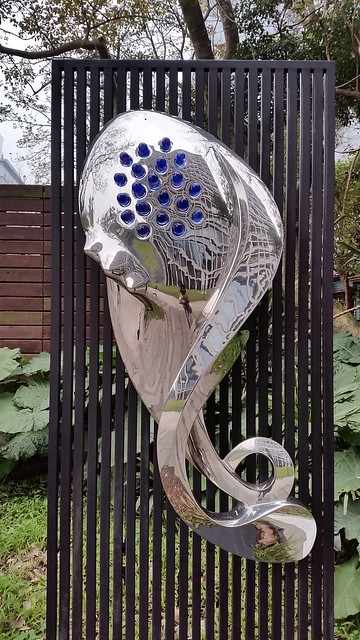 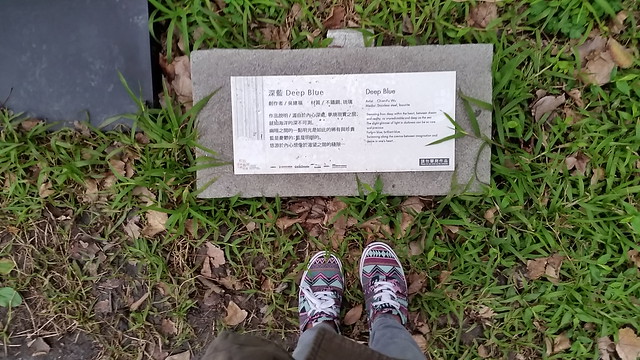 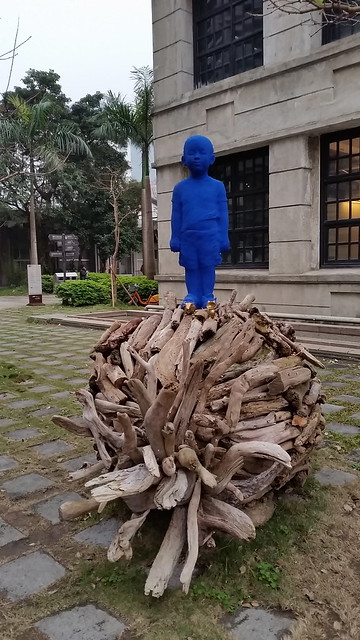 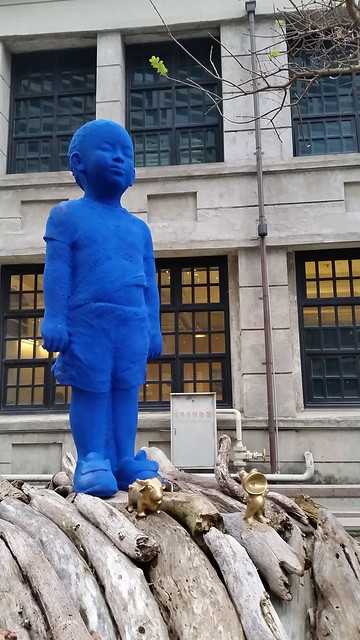 This statue gave me the chills because if I remember correctly, it was to signify some drowning 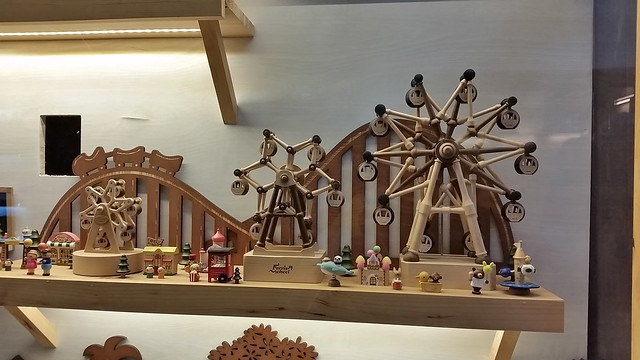 The place has its shops and a favorite is this one with miniature sets like this. Those wheels were, by the way, moving 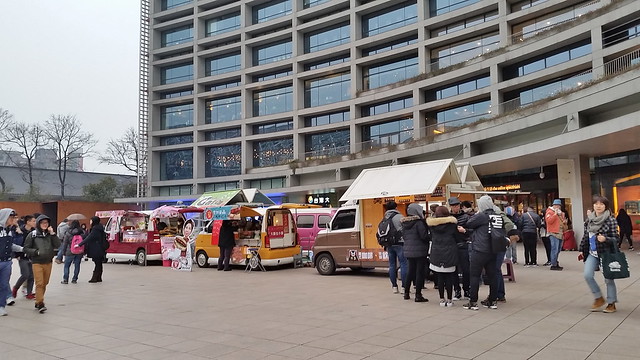 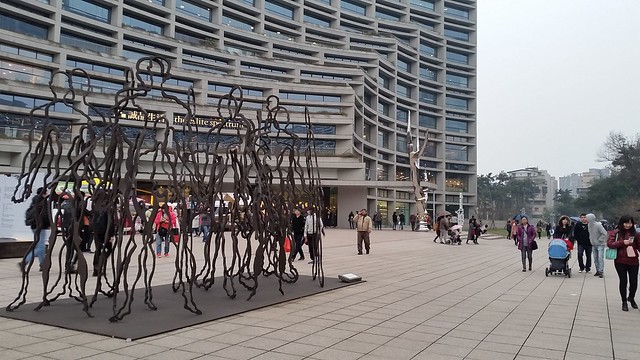 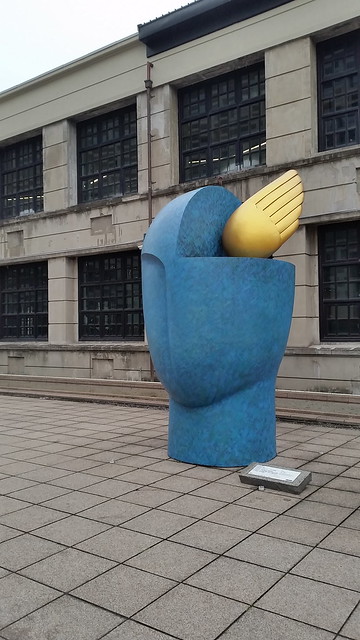 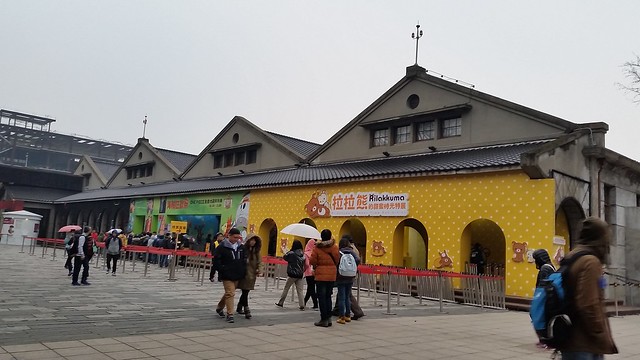 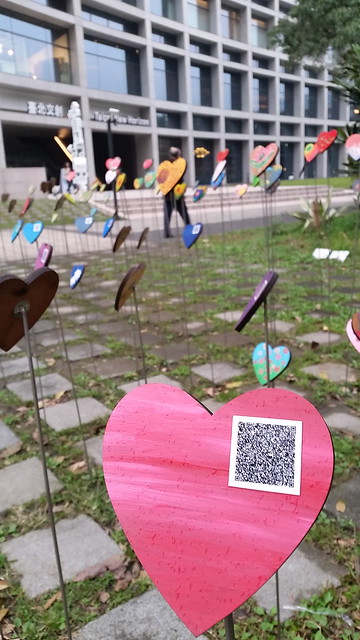 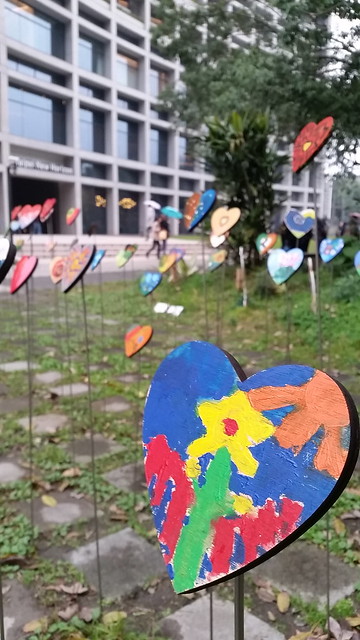 I wonder what happens when one scans that code

* Grabbed beer in a bookstore-slash-cafe

Upon Googling now, I learned that its name is YUE YUE BOOKSTORE but at that time, I was just finding a cozy place where I can drink and catch up on writing about my day. I could not remember now how – but I ended up sitting in the seats outside. It had a lovely view – both of nature and people but I remember feeling uncomfortable because it was so chilly to the point that I even wished my beer was not as cold. With such disposition, of course I could not concentrate on my writing so I distracted myself with people-watching.

When it started to drizzle, it was my signal to find a spot inside. Unfortunately though, there were no longer free seats. 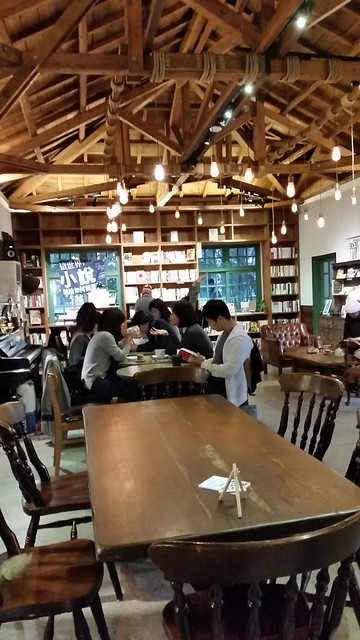 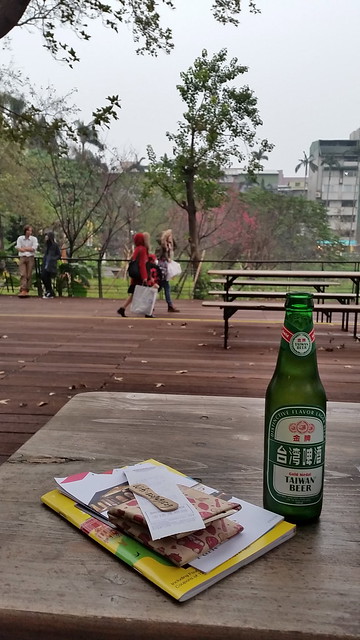 View from where I was shivering 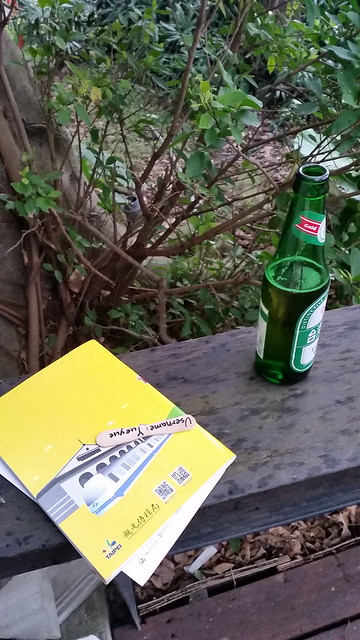 When it started to drizzle, I moved to this spot. The trees though offer not enough shield 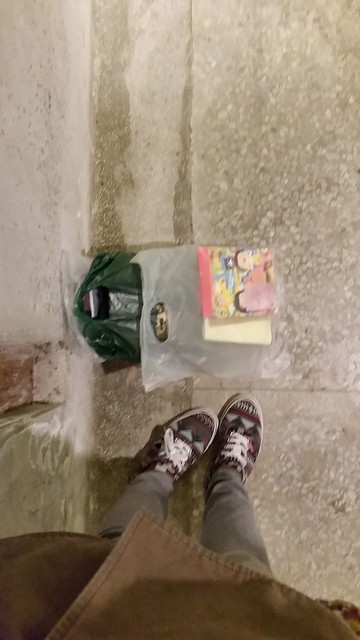 I stood in this hallway finishing my beer

* Passed by THE RED HOUSE on my way to my hostel

It’s not easy to miss this structure as it stood there amid the buzz in the area. There are shop tents and behind the structure is this compound of restaurants and bars. (Story on latter though on my next entry) 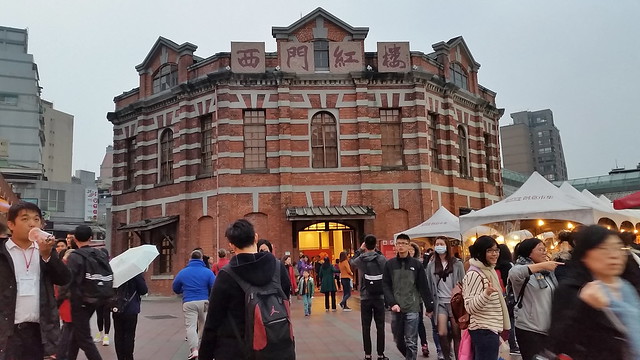 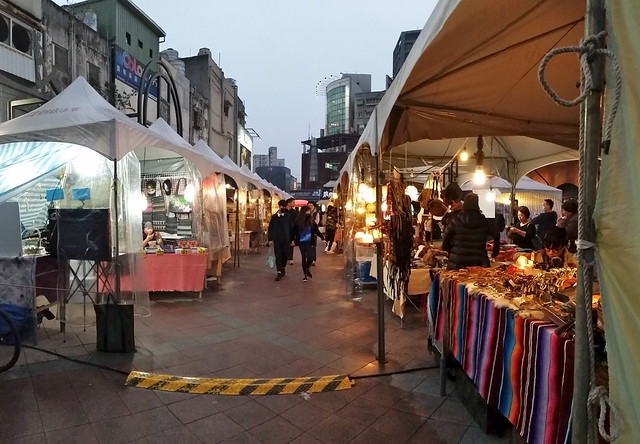 3 thoughts on “[Taipei, Taiwan] ~ Some things I did when there was nothing planned”