A destinationless afternoon and some random discoveries – 11.16.15

After Camera Museum, rest of my afternoon was free that I just walked, stopping in shops that seemed to sell interesting stuff, grabbing some beer, discovering more street art and discreetly and briefly immersing oneself in a quiet afternoon of locals from the jetty villages.

Sending postcards is a common habit among travelers. What I like about Penang is that it makes it convenient with its shops that sell and ship postcards for you.

While it was a common, it was a first for me to do it then, my postcard from a store on the same street as my hostel. After choosing one from the many ones I like, I sat on a small table and wrote to myself intending that message to be sent on my 30th birthday. A note to my future self of some sort. 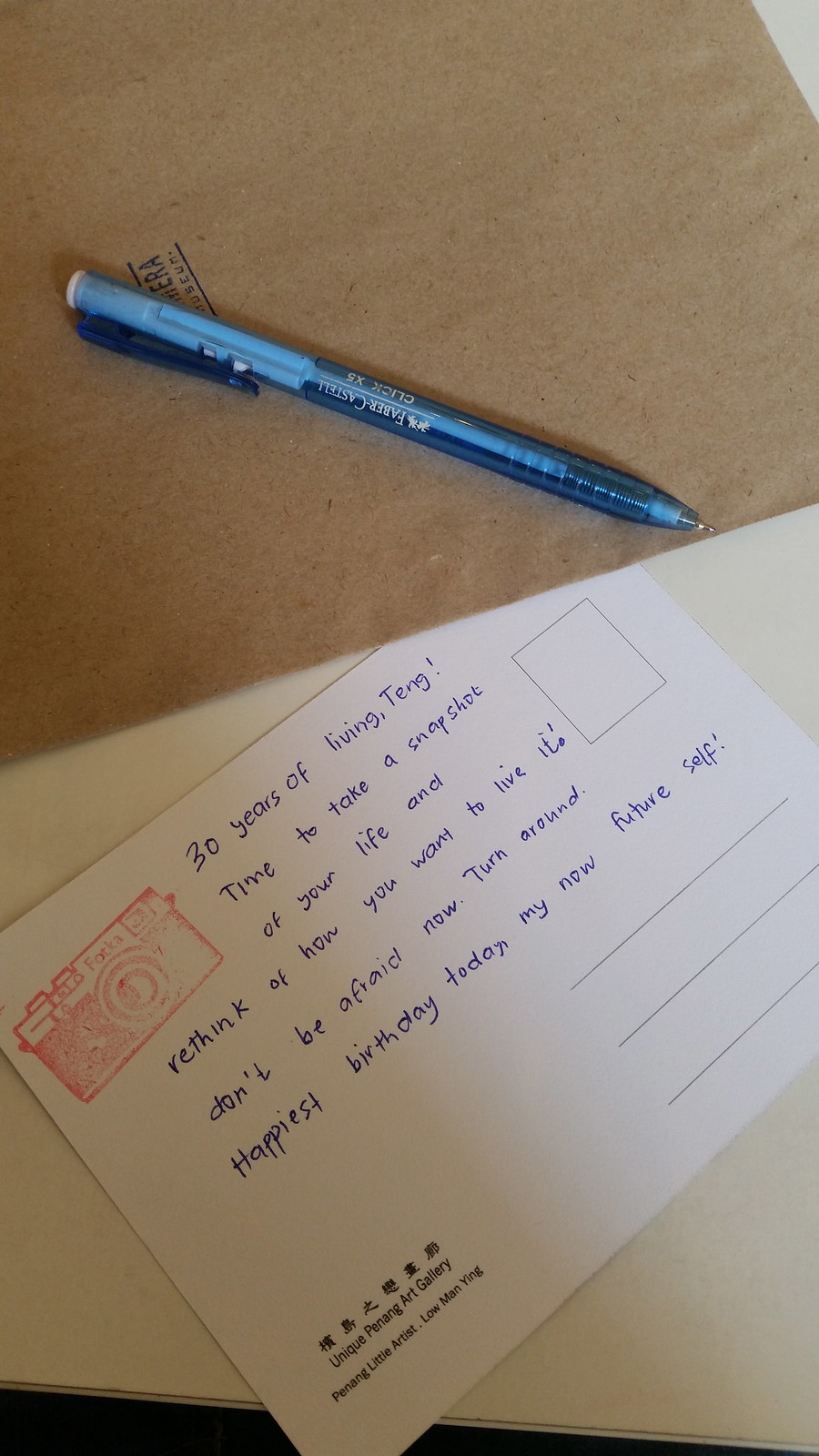 In an area near the jetty villages though, I saw a shop called the Postcard Shop – for obvious reasons. (And a side note that that black cat looks real). 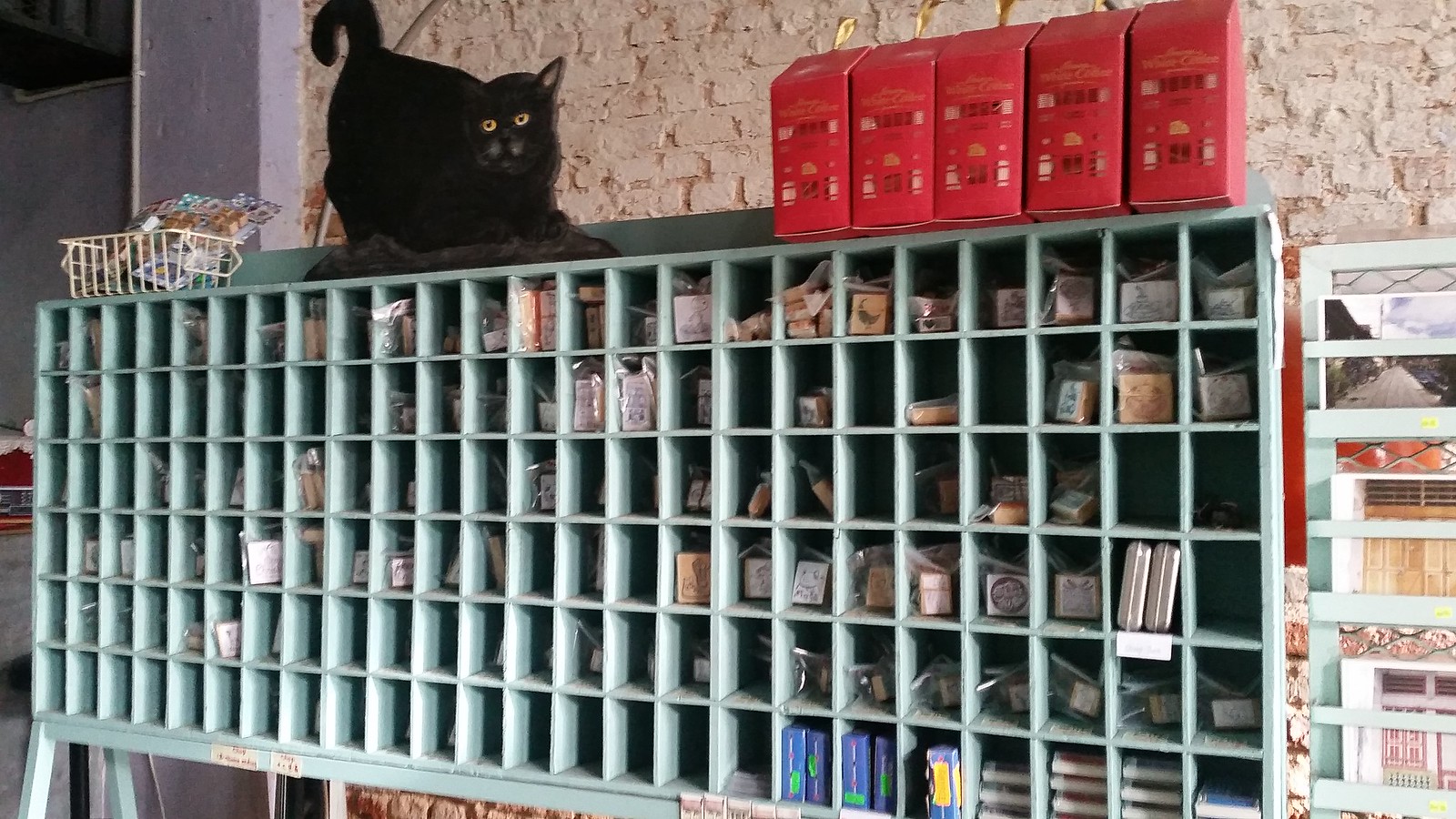 This strip near Muntri and Chulia Streets is known to have many restaurants and bars in Georgetown. What is charming with these areas though is the rather intimate vibe and it is more common to see people drinking in small groups, chatting amidst a modest background noise.

A bar I observed to be quite busy (specifically popular among tourists) since my first night. At daytime though, it transforms into a quiet cafe – which lucky for me though, also serves beer in the afternoon. While small, this place is packed with character most notable of which is its wall nicely littered with notes from guests and witty statements about food and beer. 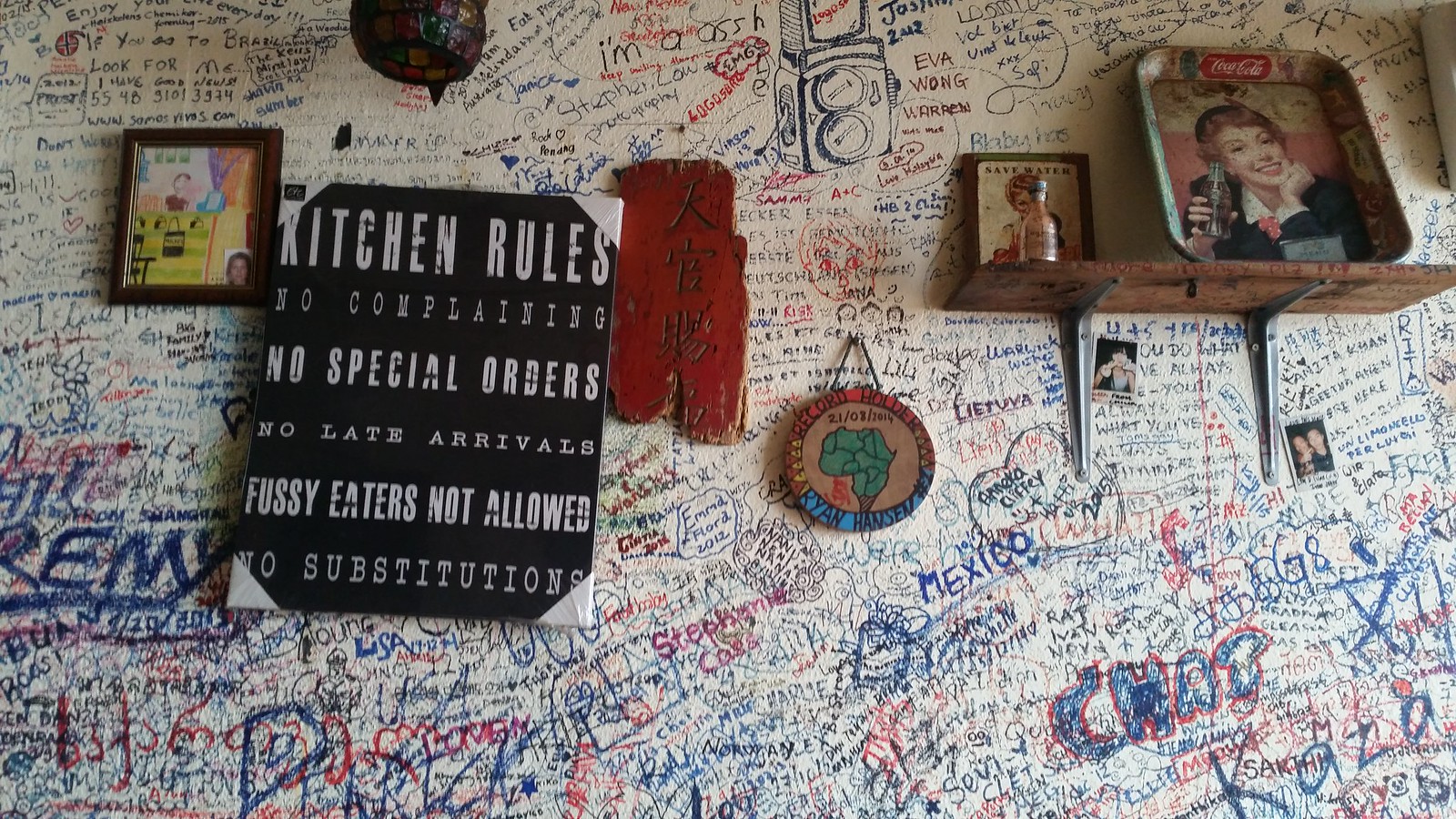 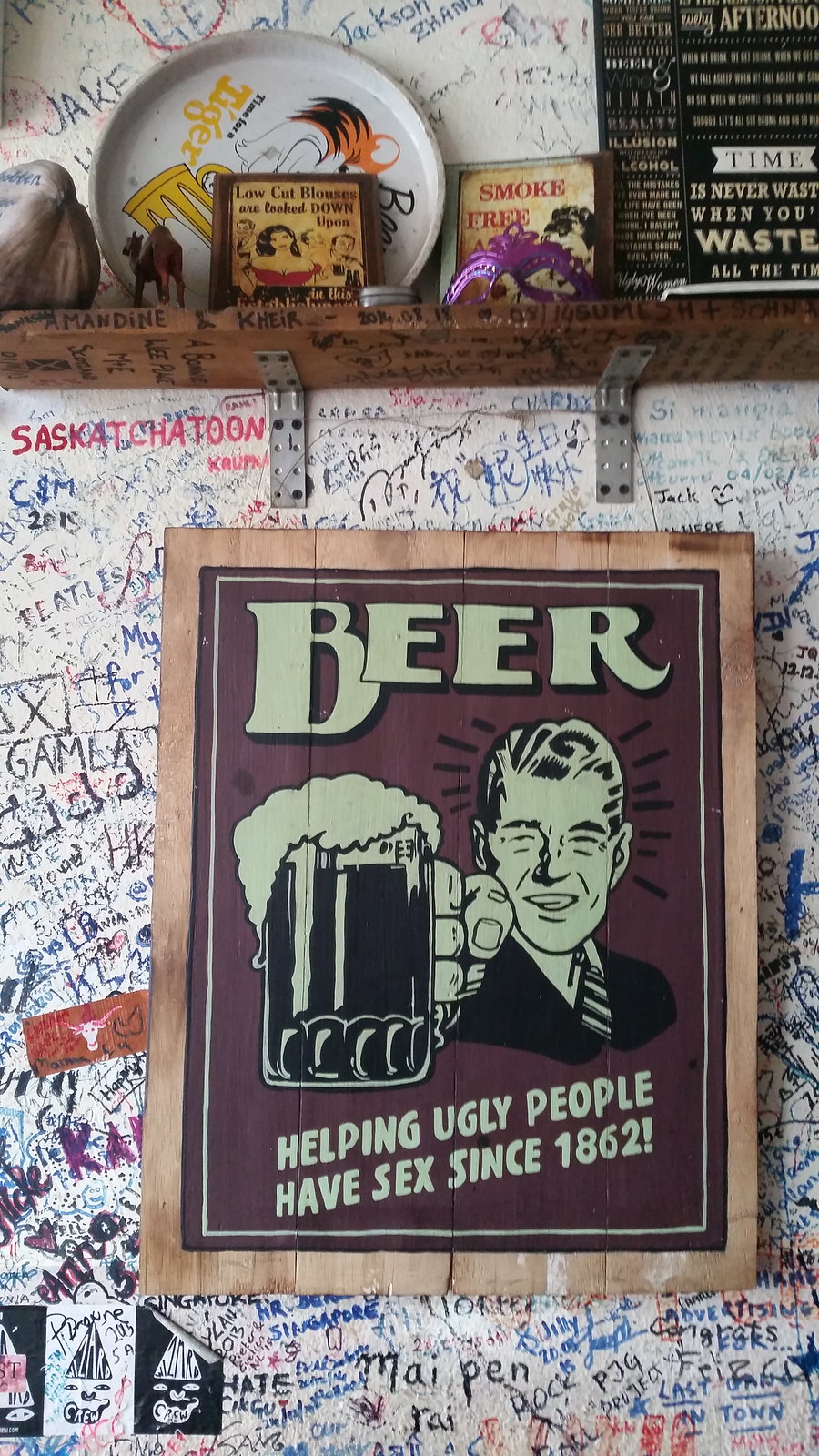 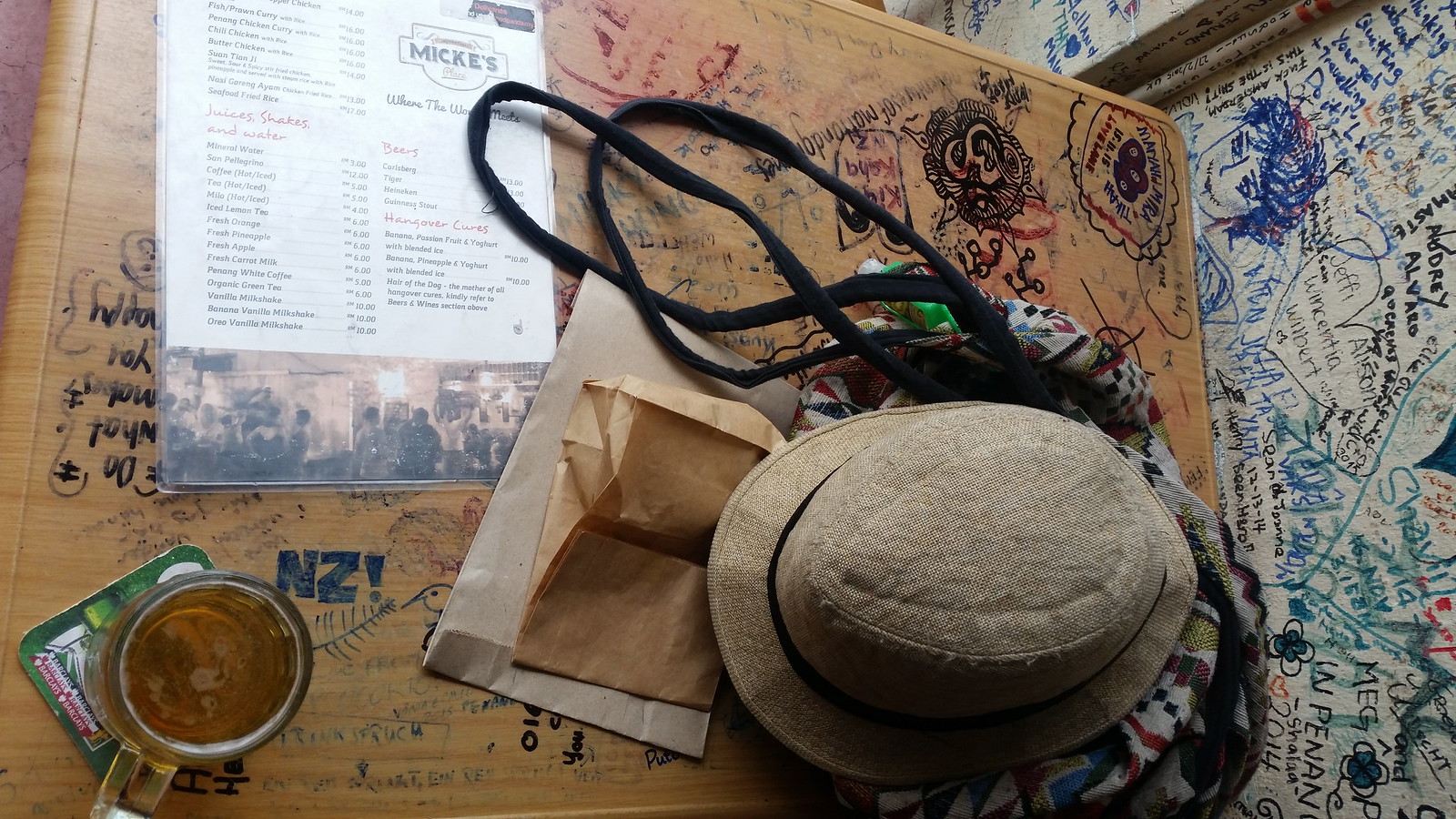 Even tables are not off-limits

This bar at the corner of Love Lane is closed at day but open early evening. What I find lovely is the clutter of the place interspersed with interesting bike installations. wall photos and mini-shelves. The bar acting as what separates the inside from the outside is a rather smart space-saving move. 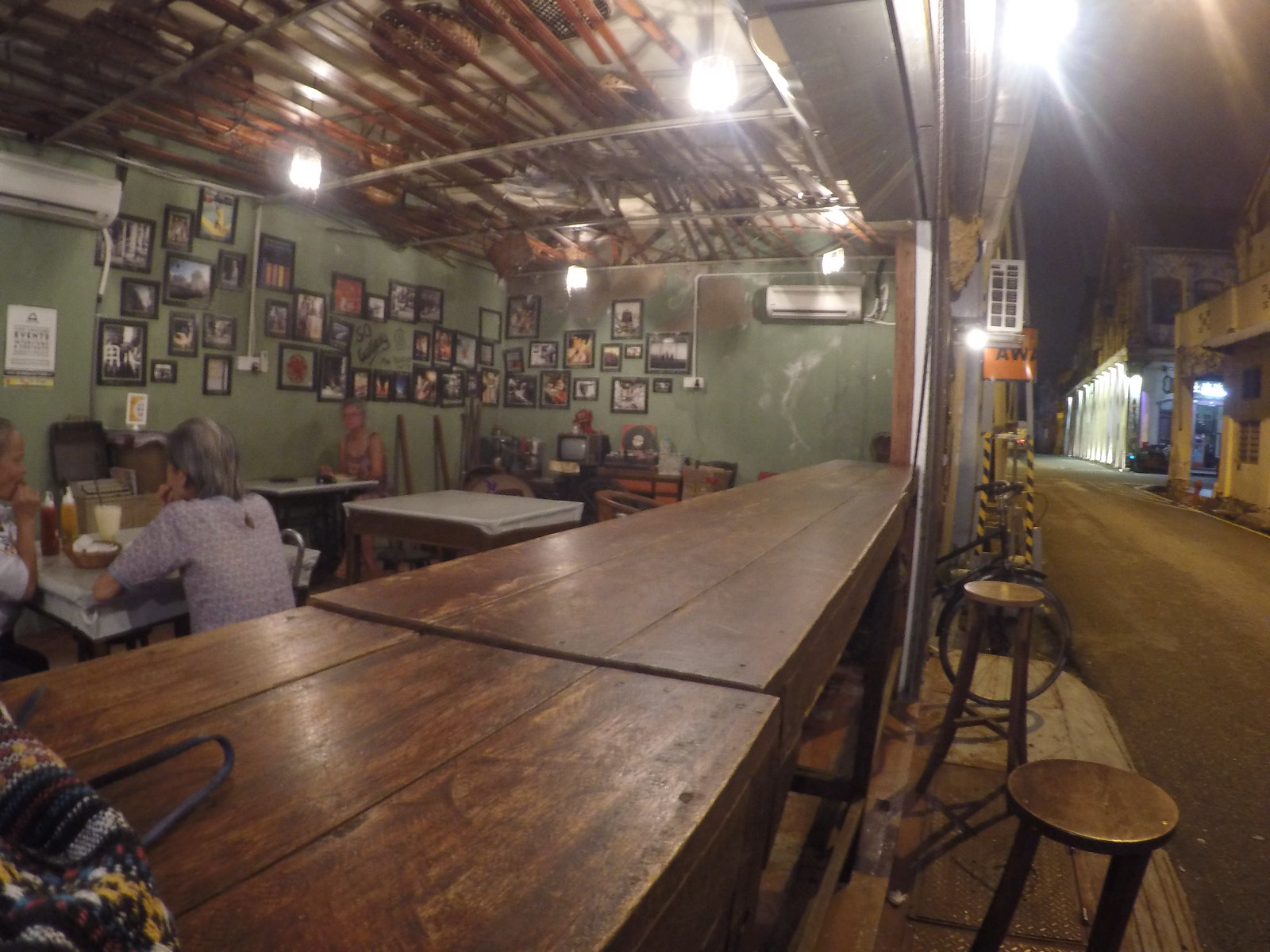 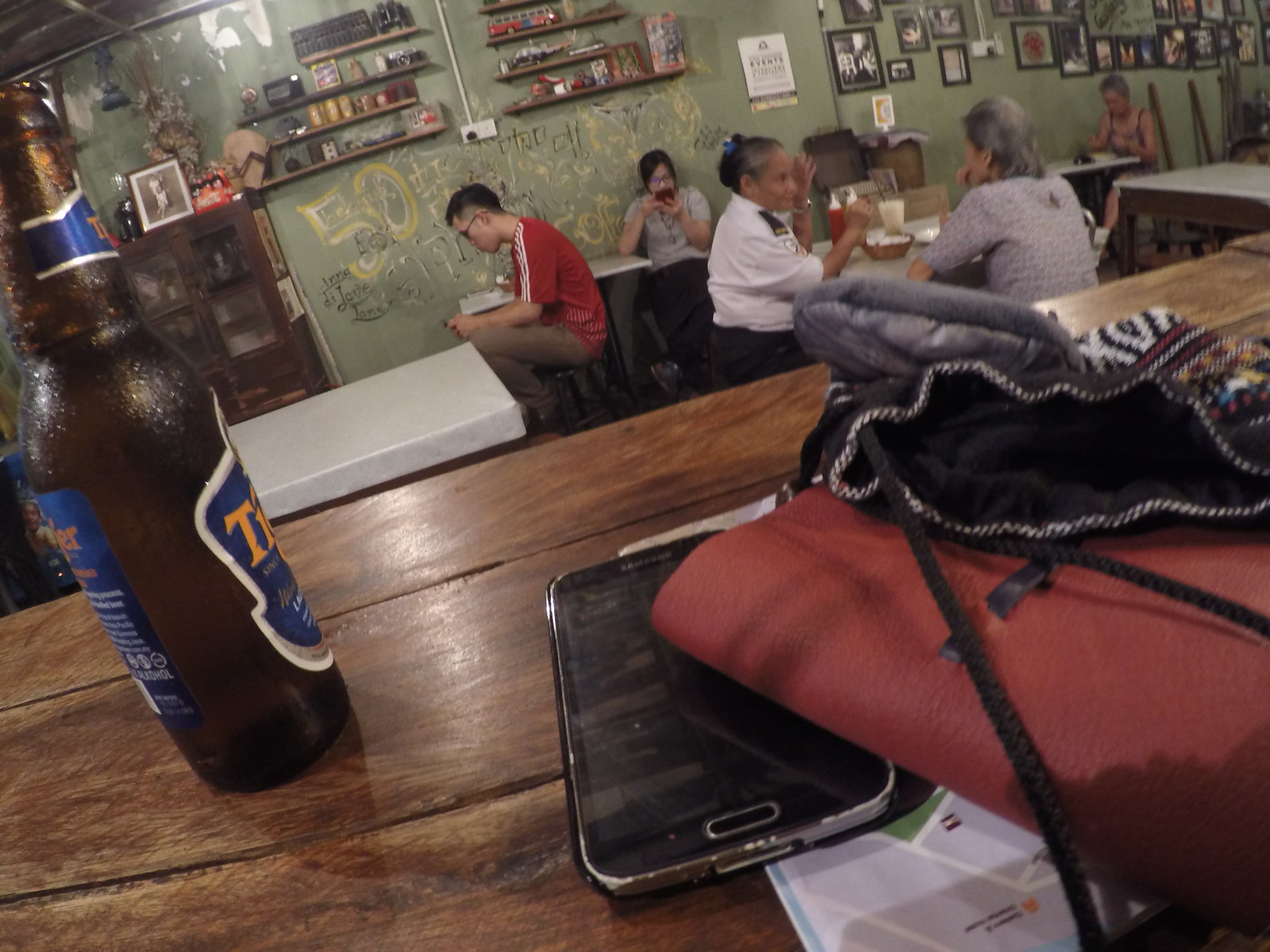 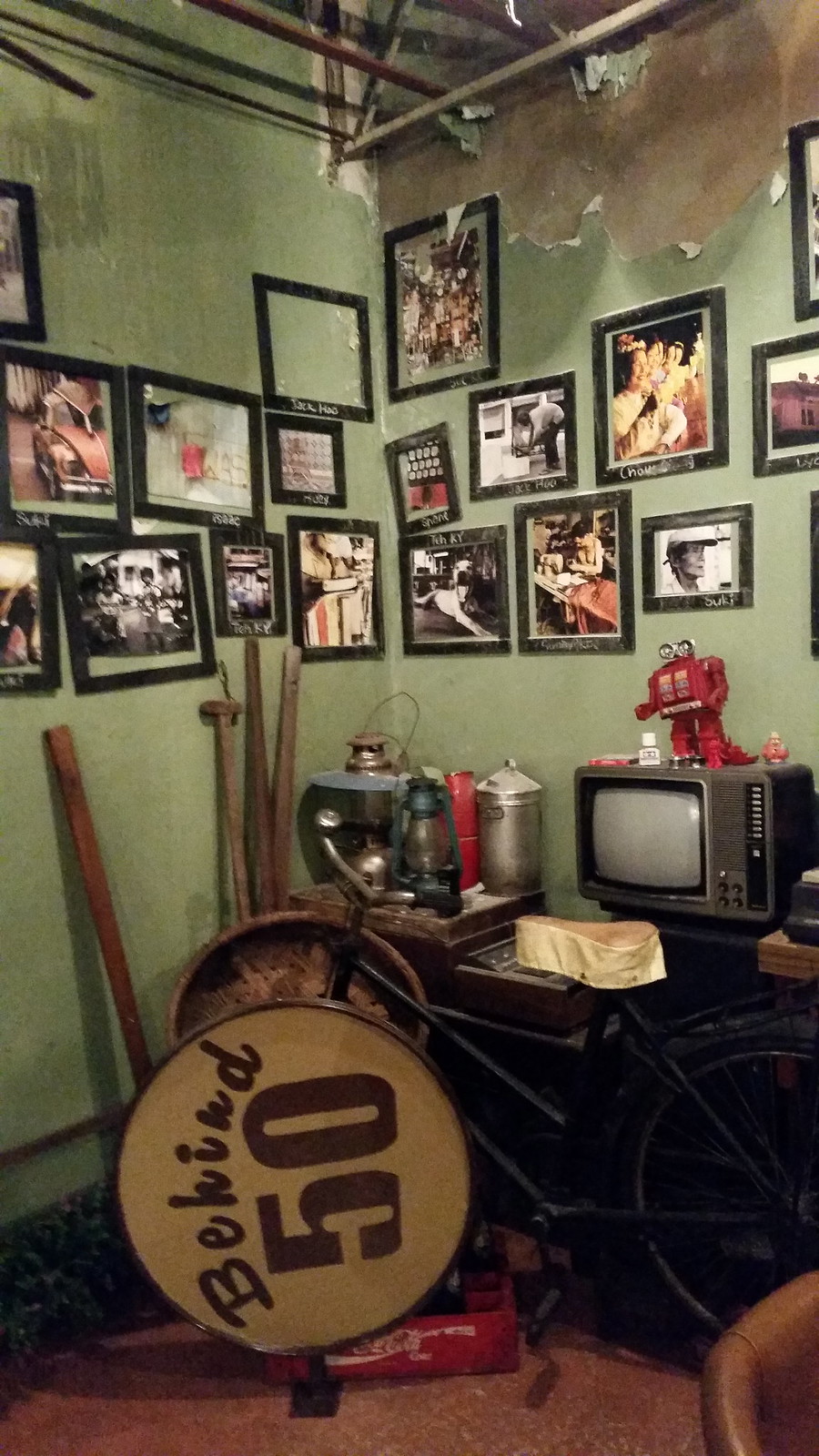 These century-old villages are made up of home on stilts near the waterfront, each represented by Chinese clans.

This is the most popular among the jetties as it is also the one closes to center of town. This village seems to know that it is a tourist destination as some of the residents have put up small cafes and shops for its guests. Non-residents are allowed to visit as early as 5 in the morning to 9 at night. 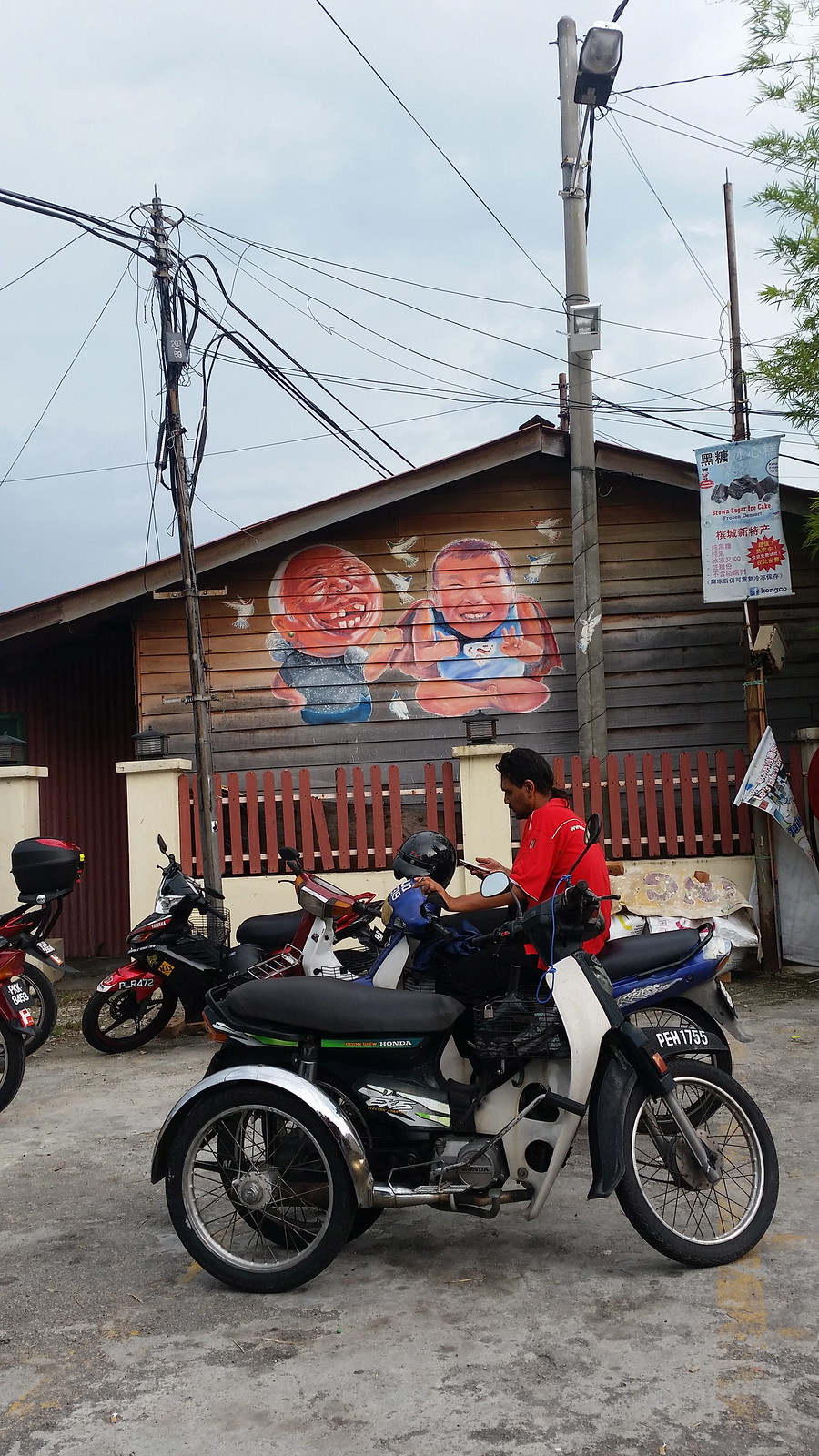 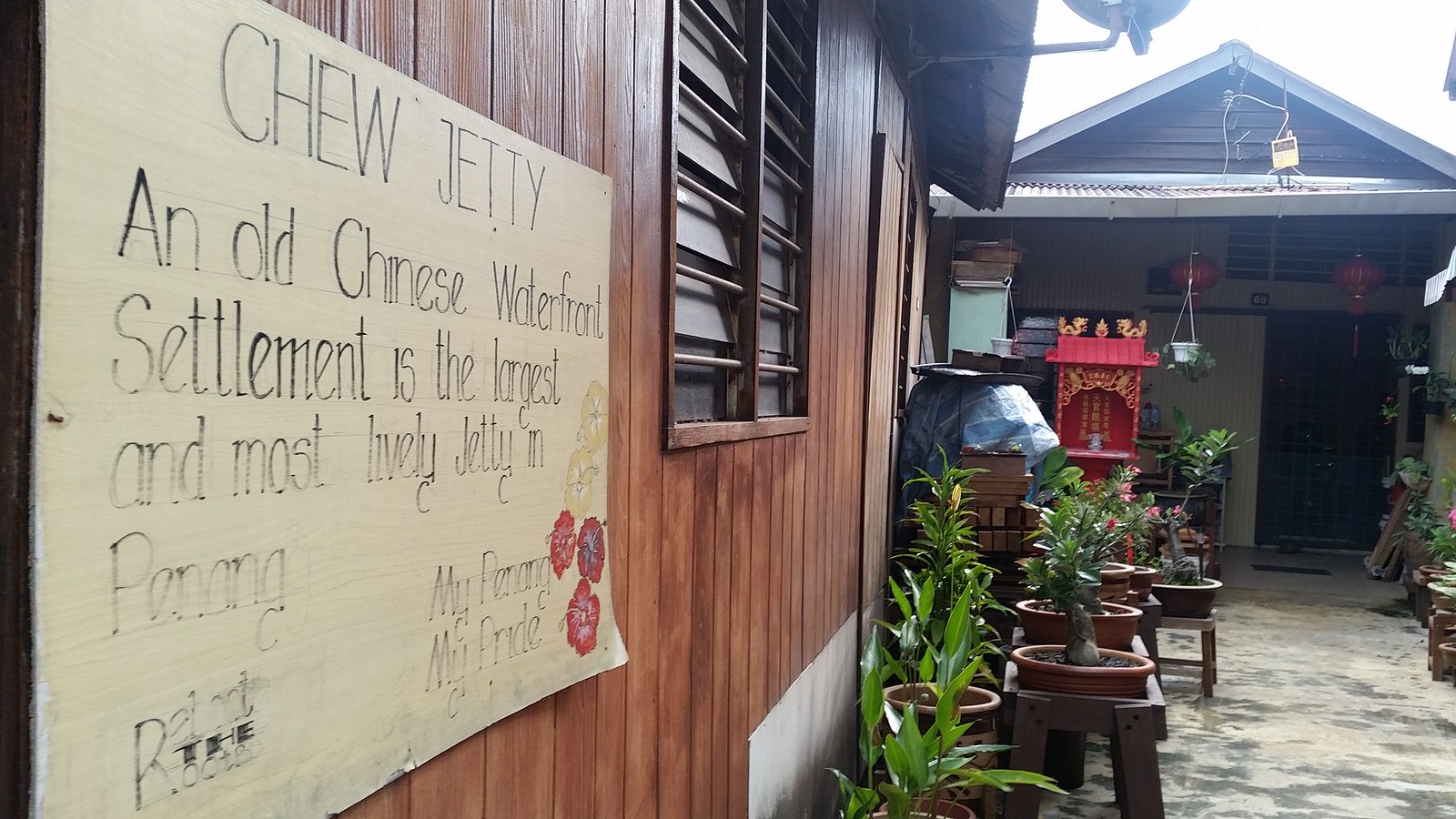 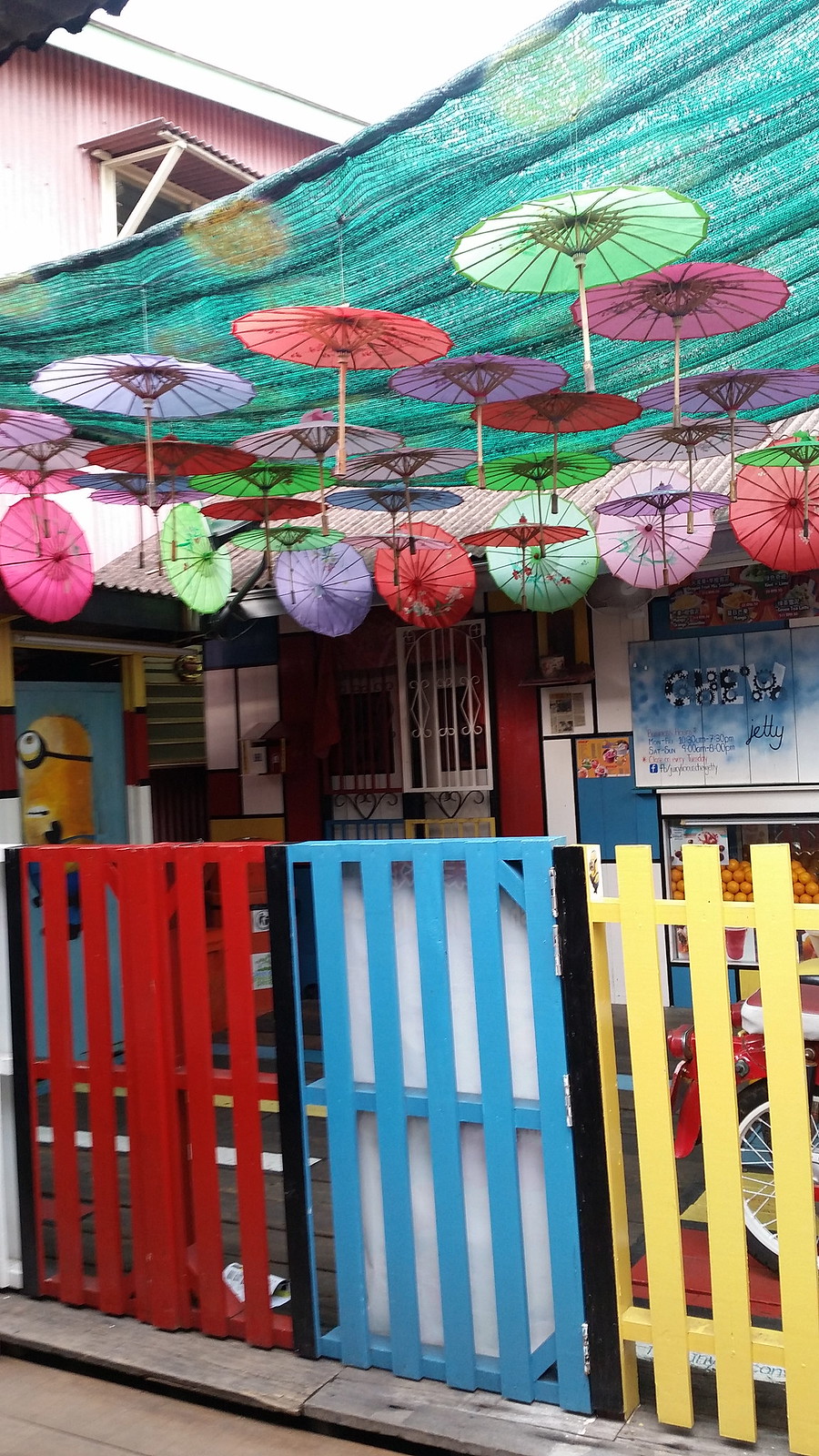 Aware of its many visitors, some residents may have decorated their house to stand out 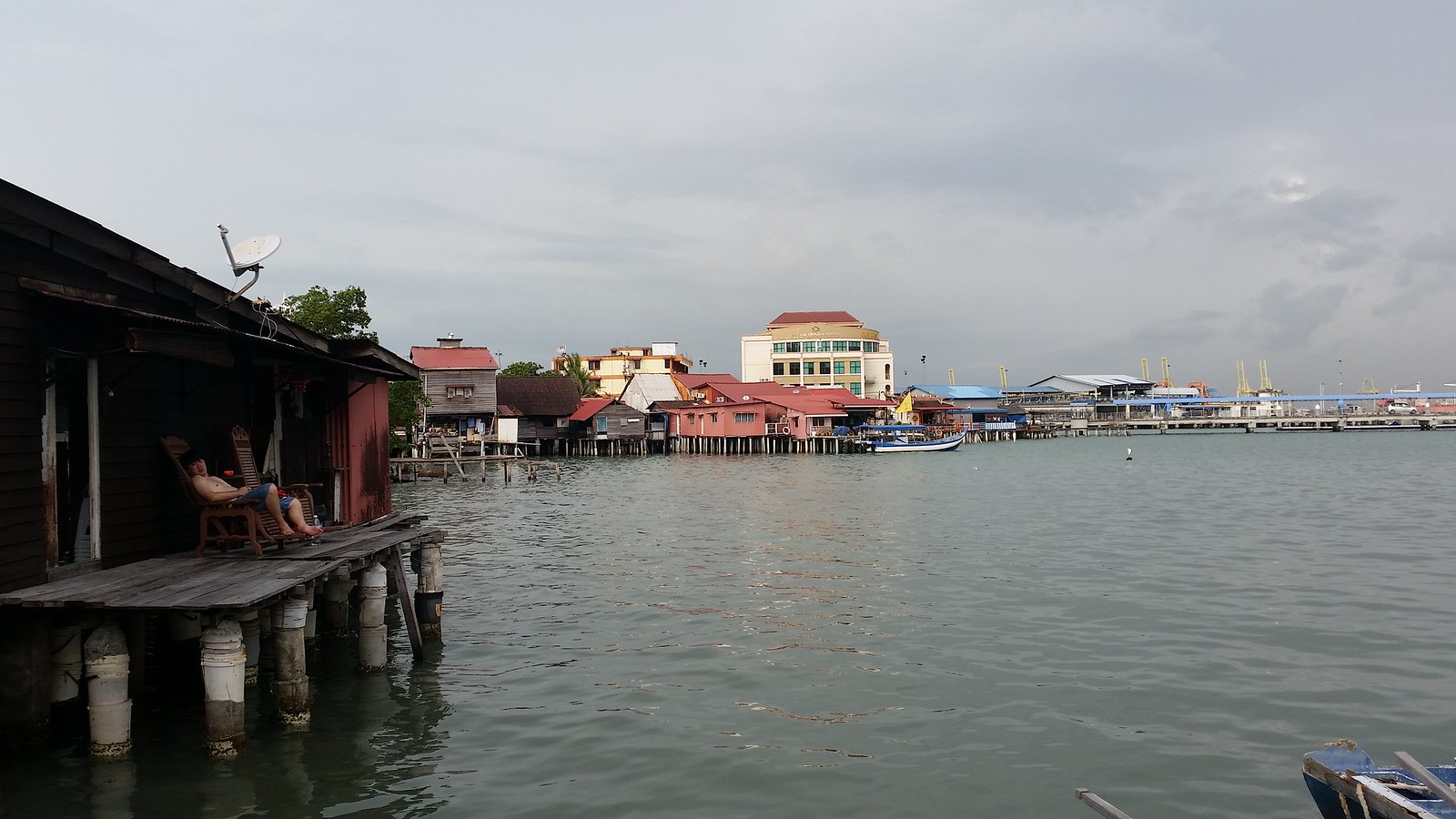 From the deck is this view :

Man bumming out while we tourists busy ourselves taking photos 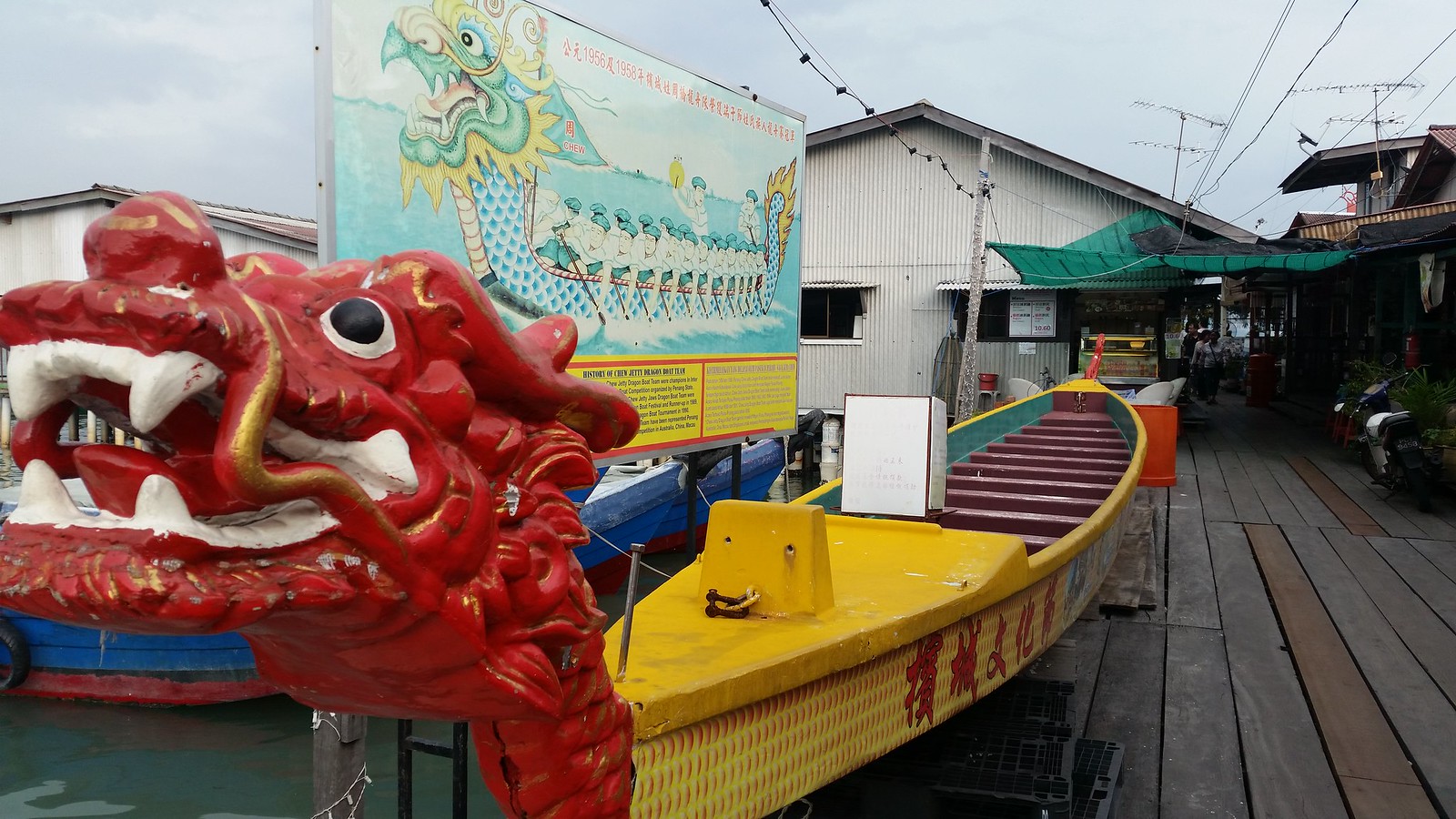 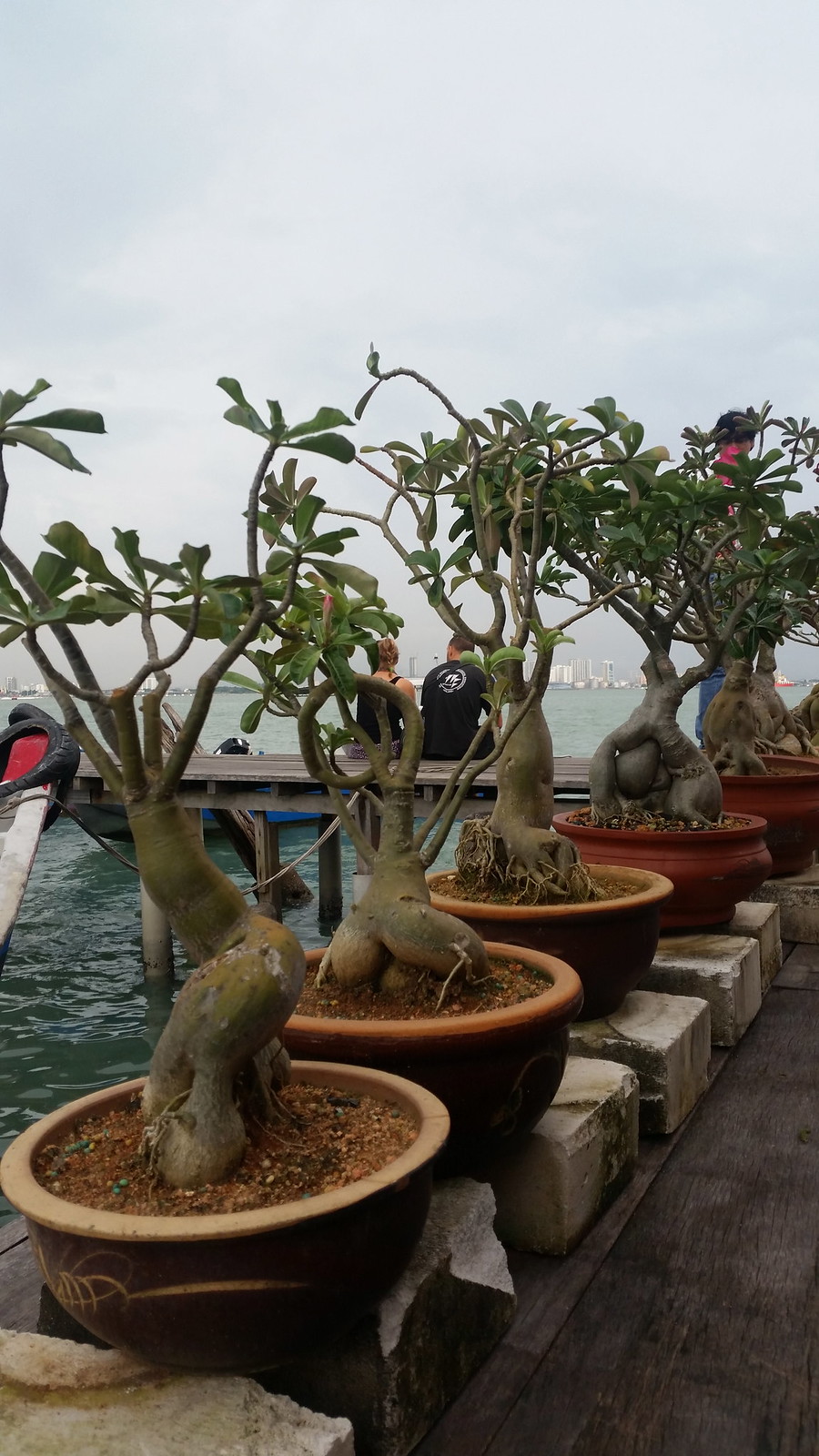 Is it just me or do those roots look lie butts 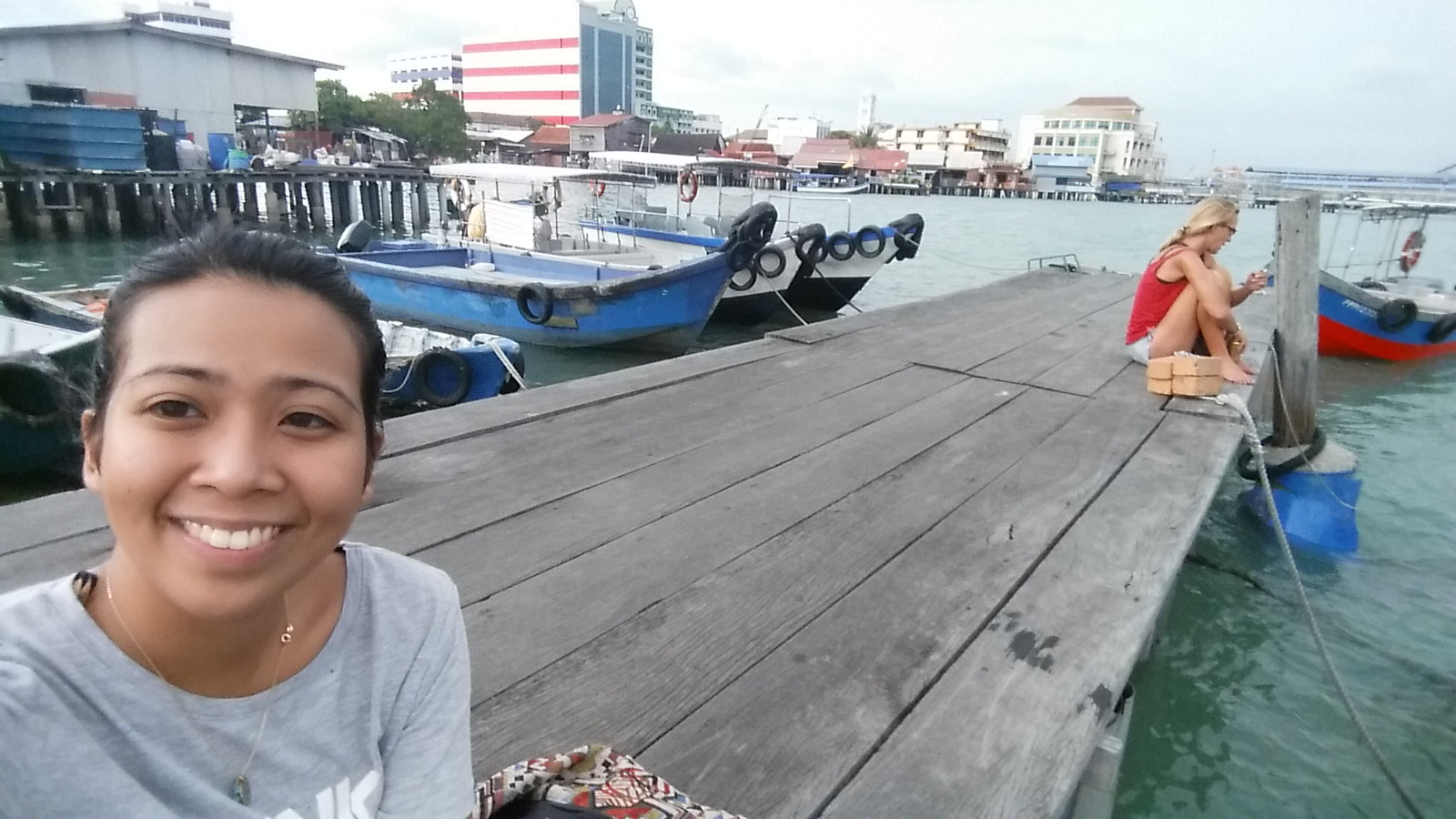 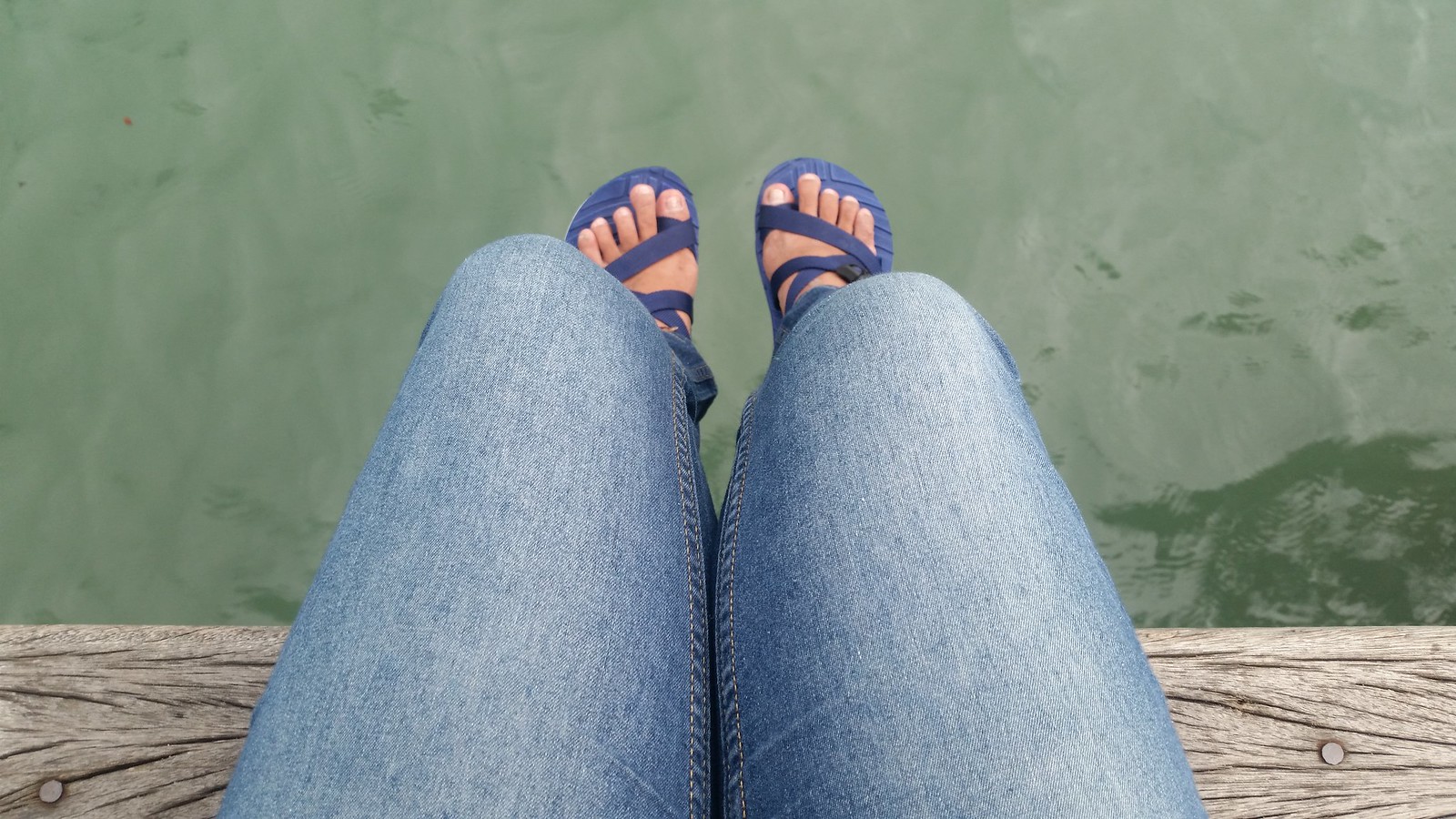 I couldn’t say why I chose to visit this jetty over the remaining five. Neighborhood was very quiet and I was the lone tourist that I felt unsure whether I was allowed to be there to begin with or was I being an ignorant trespasser. I then just quickly walked to the dock, took some photos and immediately left the village. 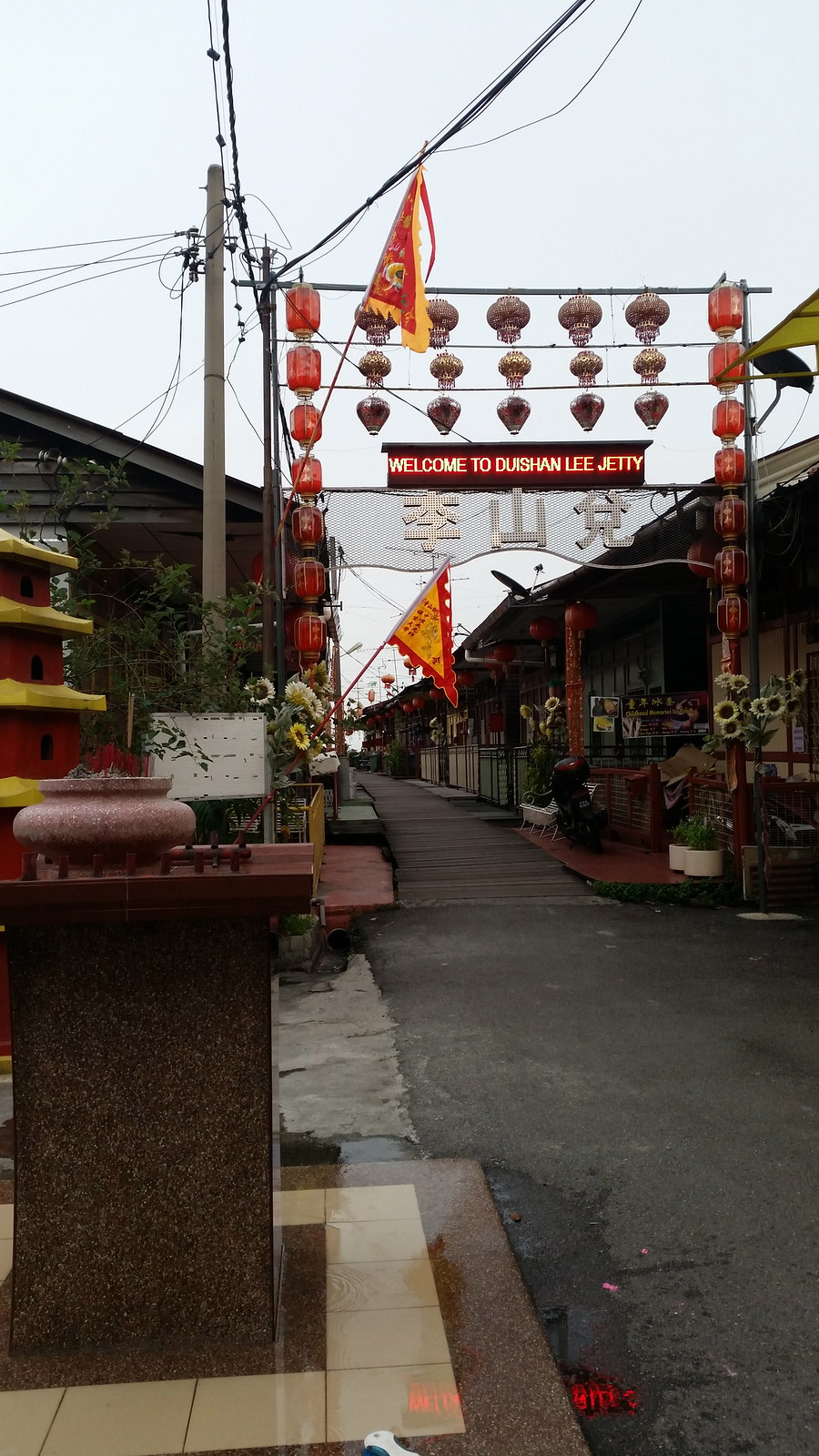 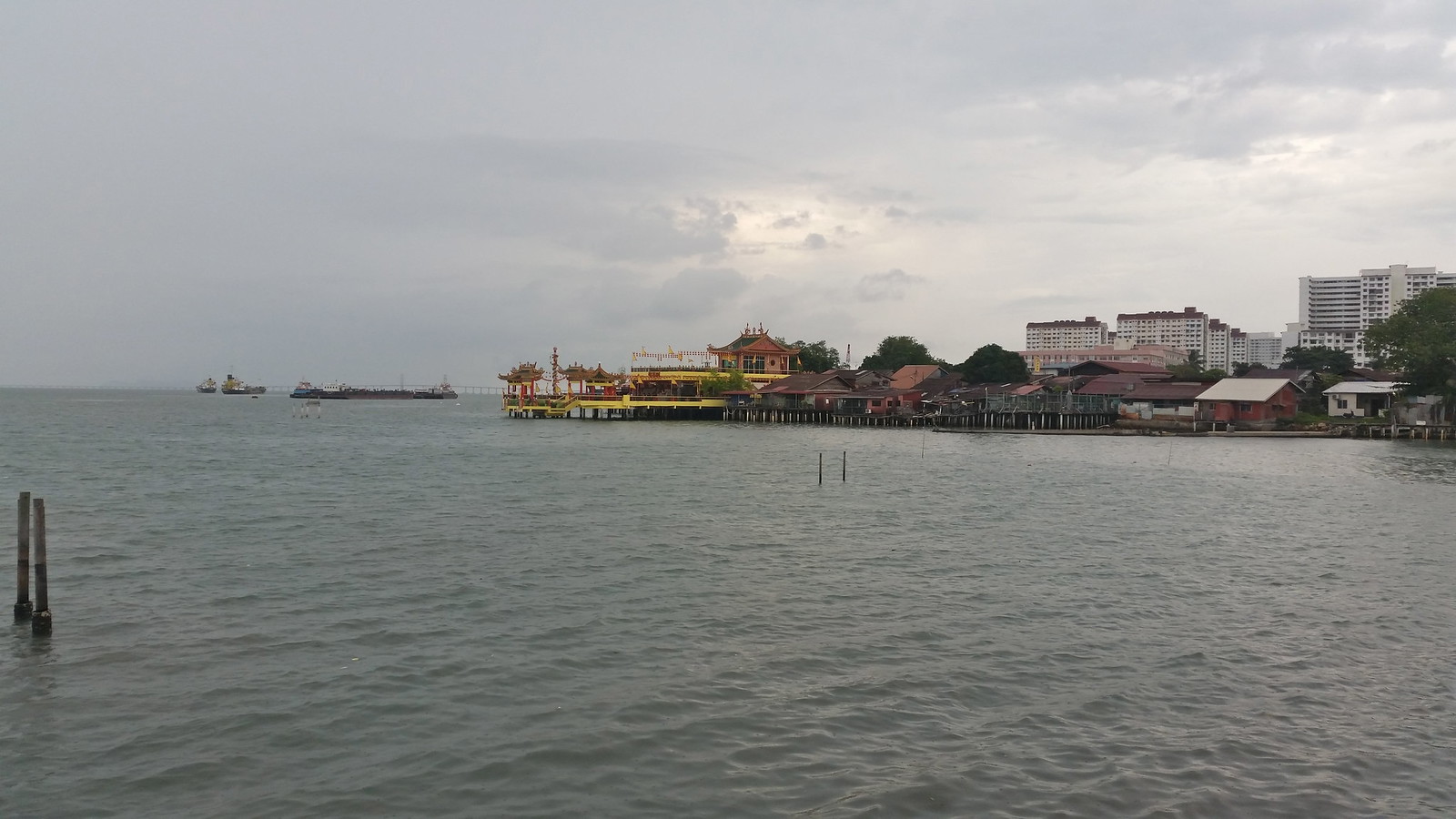 e. Street art with a cause

As also shared in another post,  a walk around Georgetown will give you encounters with cat murals, most of which are likely to be part of 101 Lost Kittens project during the town festival. Created by artists called ASA (Artists for Stray Animals), this project was meant to increase awareness of caring for stray ones. 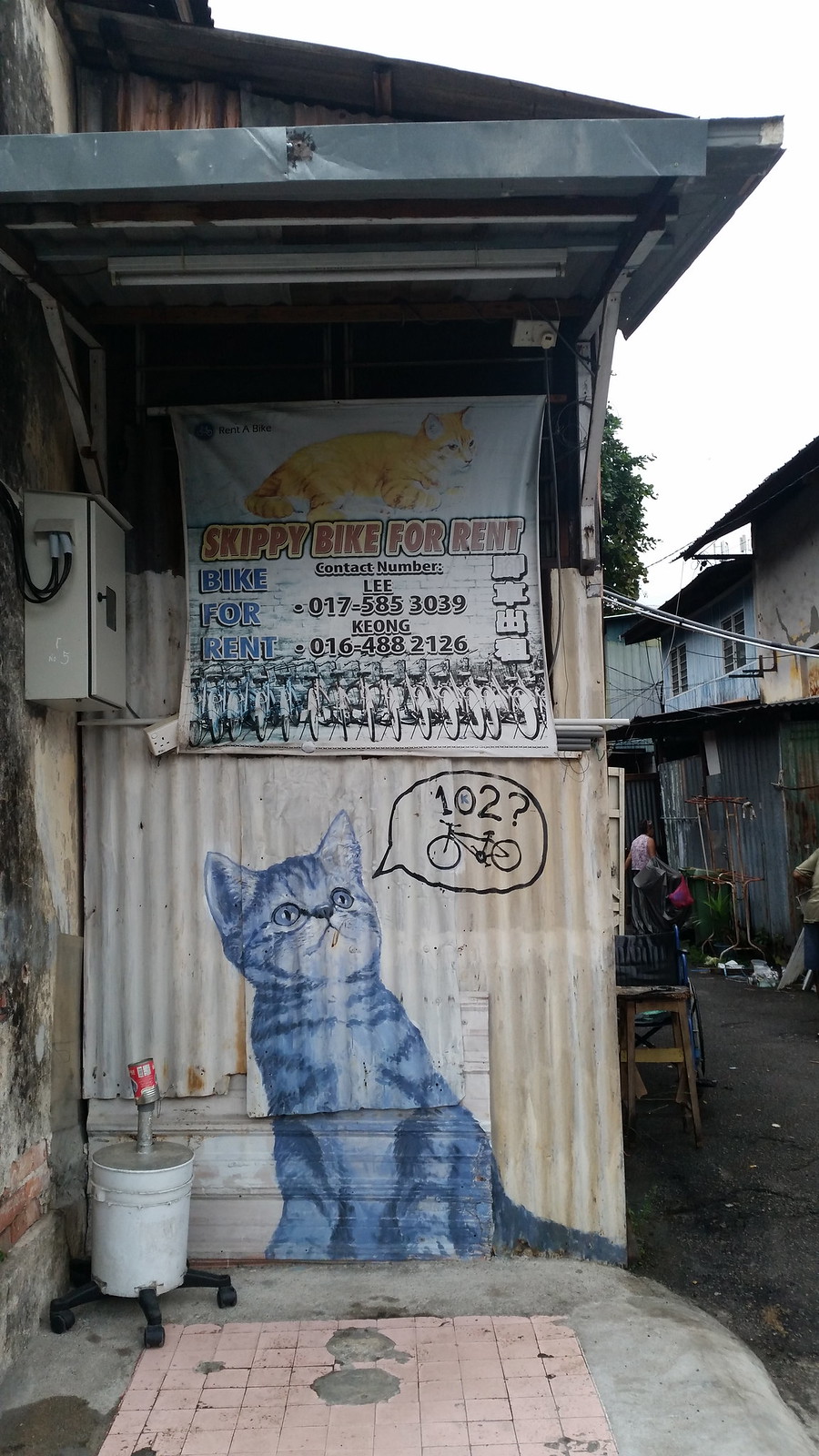 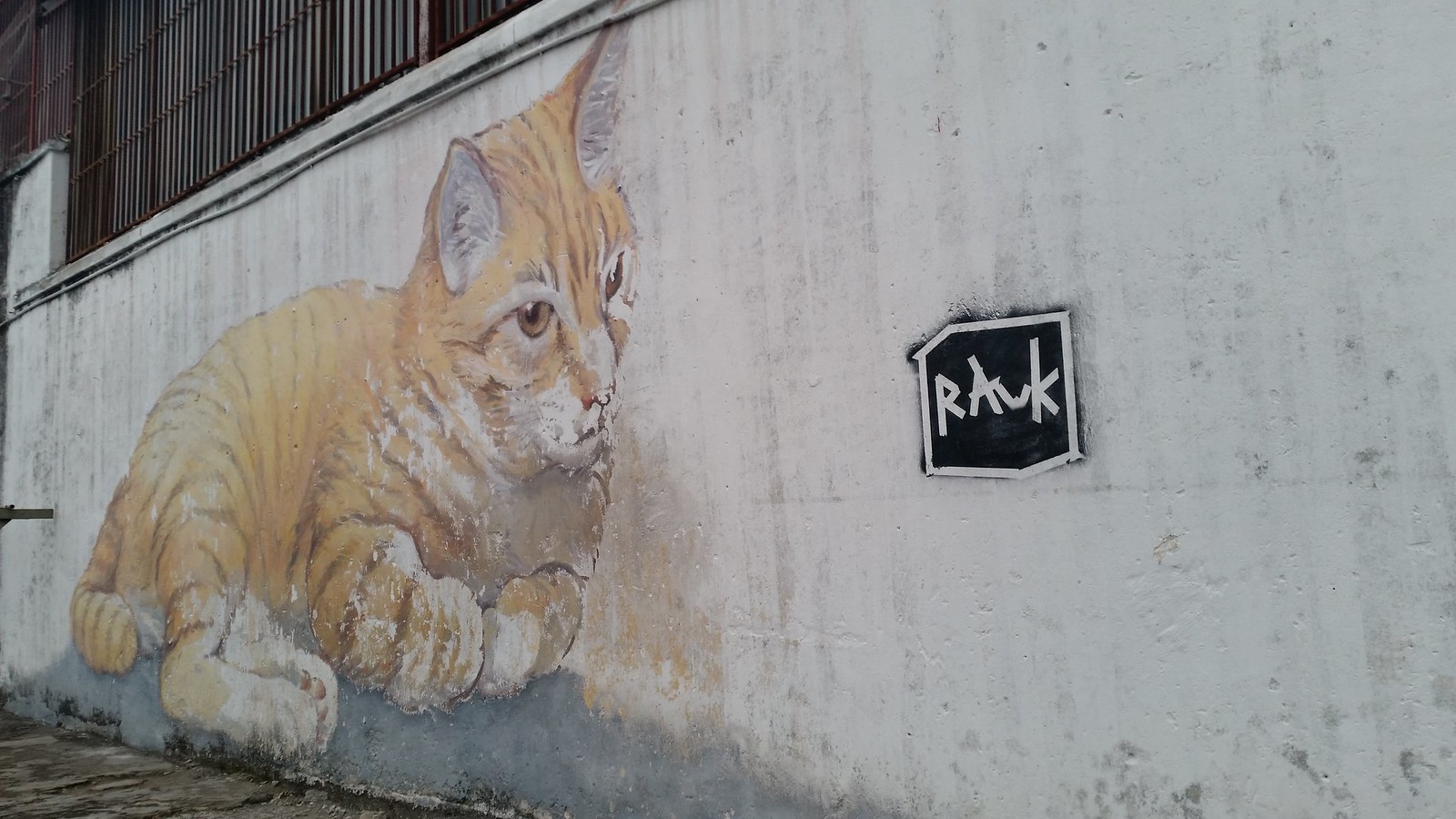 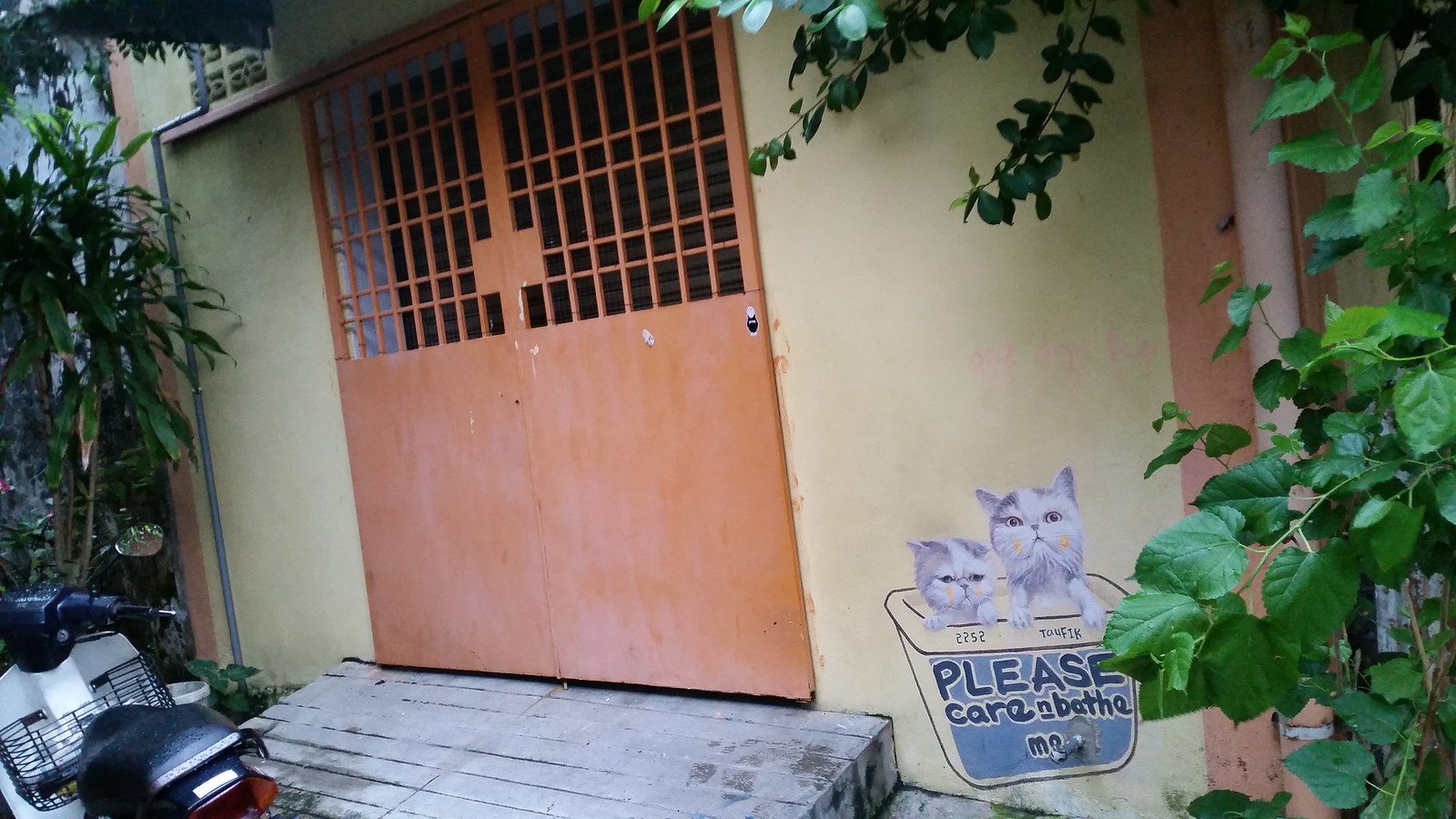 Also found near Skippy / Giant Cat on Armenian Street, on the same alley as the Giant Rat.

It was just a random discovery as I needed shelter when it started drizzling on my walk back from the ferries. The place’ set-up more inviting for big groups but luckily, it was still not some crowded so there was some space for a lone guest like me.

While I only grabbed a beer, food options are wide as you can see from the stall names. There is also a stage at the center which could mean performances are sometimes held there. 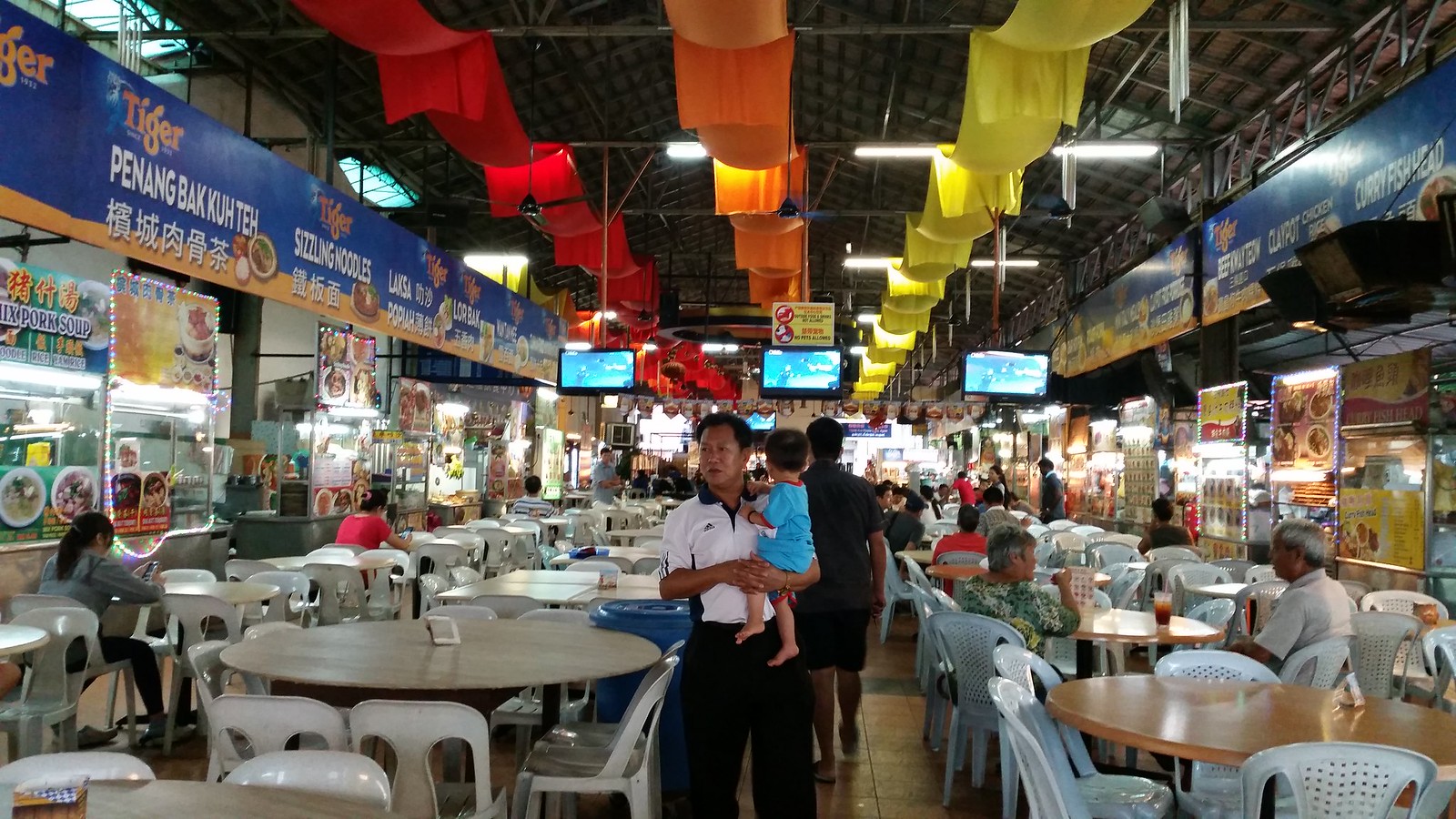 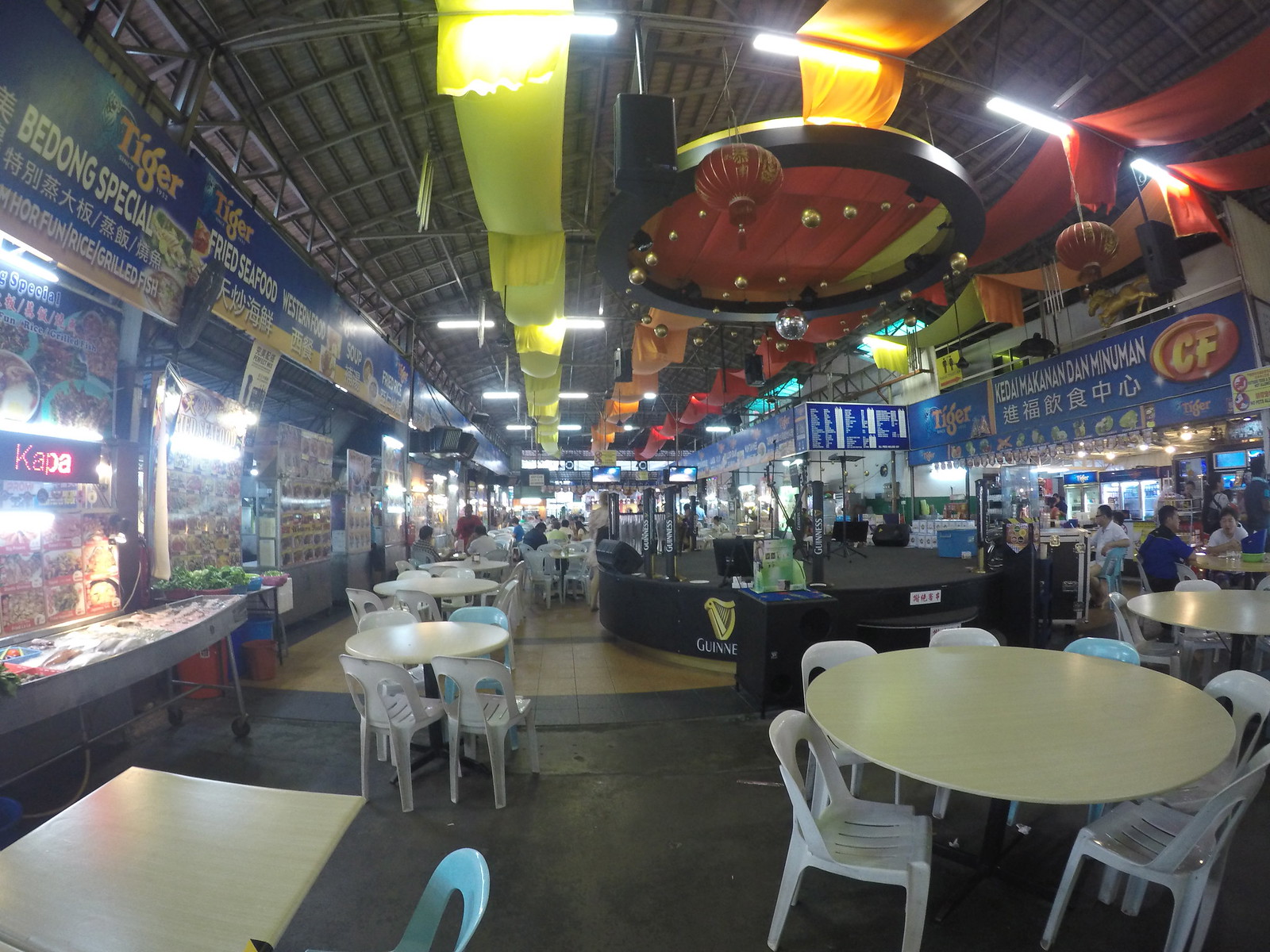 As in most Southeast Asian countries, food culture in Penang is characterized by street food. From processed to raw, stalls of sticks of these are scattered in places around town. 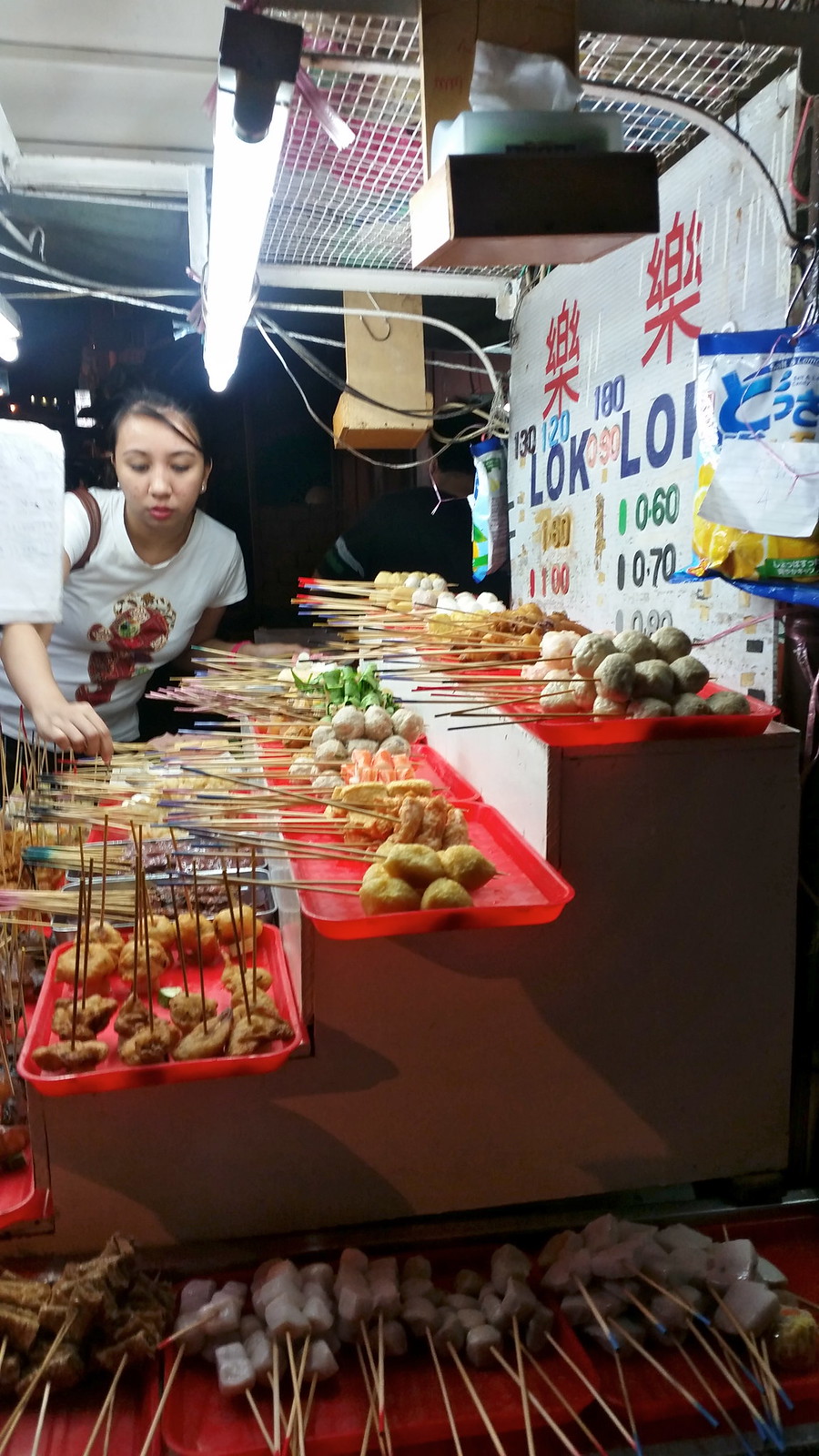 * Sleep on a budget in hostels

Certain streets in the town have residences converted into hostels and guesthouses. As in most backpacker districts, these are typically near places to eat, drink and instantly buy items for convenience.

This hostel is located on a quiet street but within walking distance to busier streets of Love Lane and Chulia. While this place retains the old of the building from the outside, the inside has the comfort and feel of a modern hostel.

This hostel is located in Lorong Seck Chuan, within walking distance from Ryokan Muntri hostel passing through Chulia Street. It had a more traditional feel than the former with its interior mainly of wood. It does however keep its walls white to allow fun doodling for its guests. 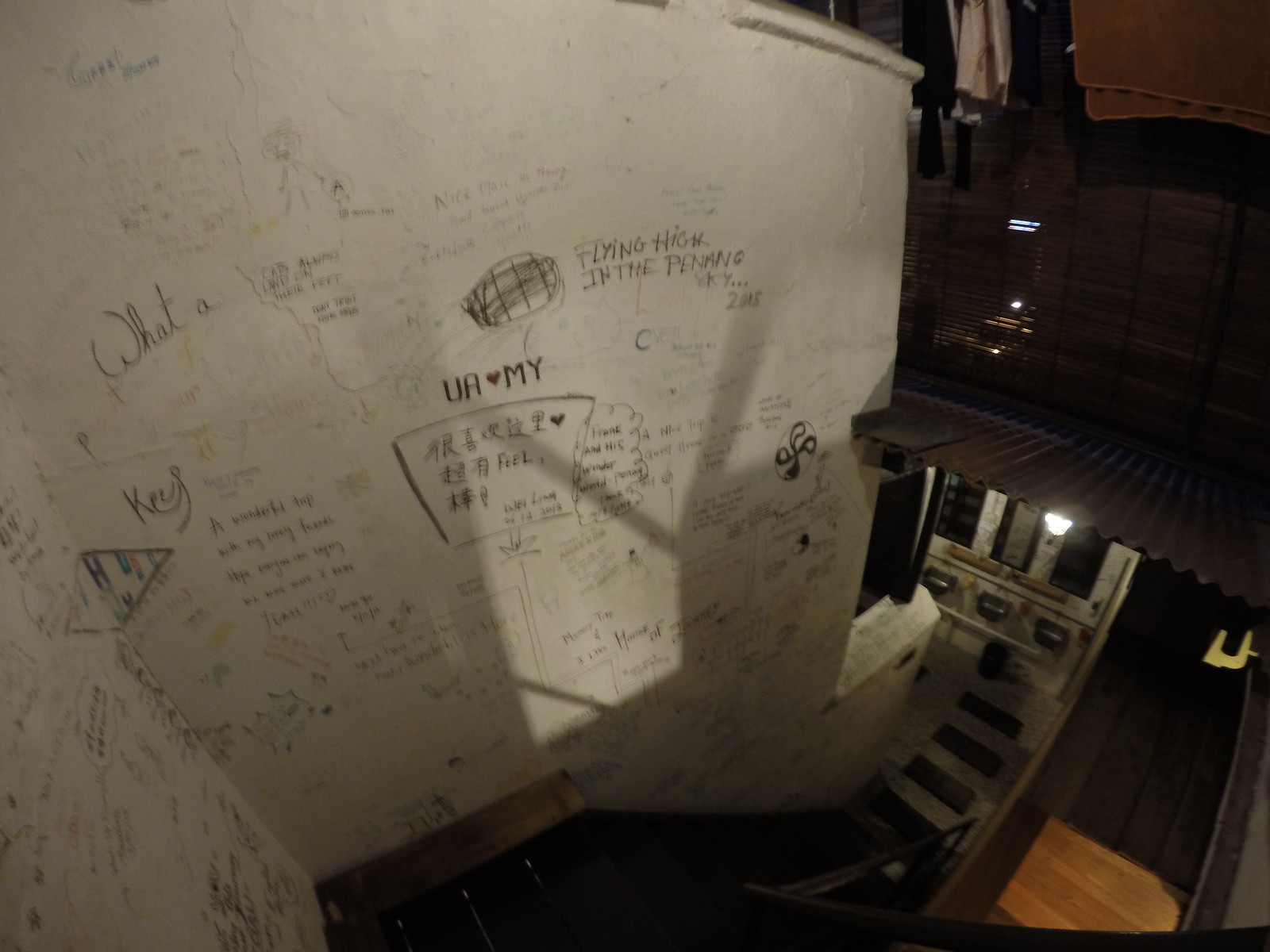 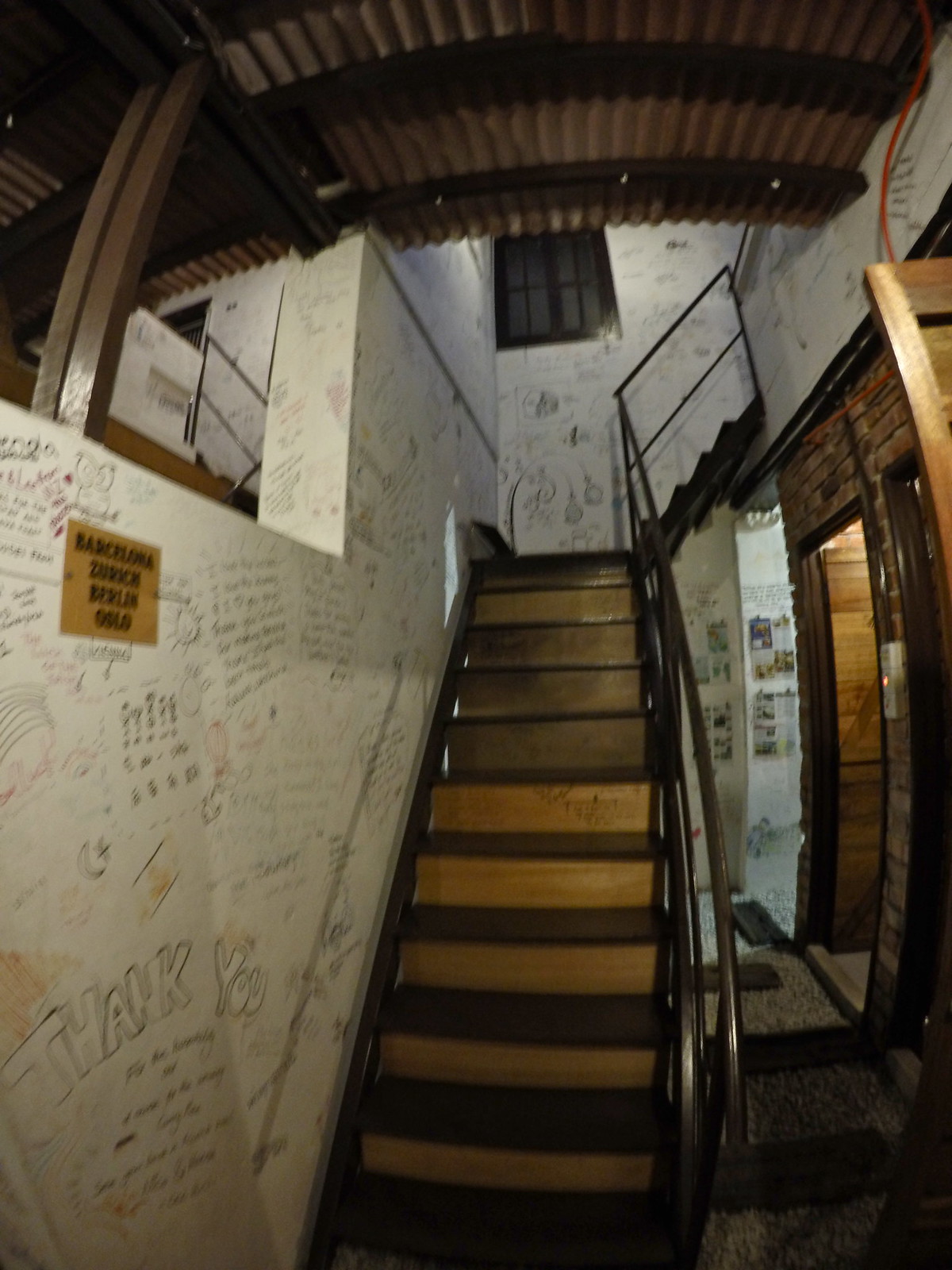 Penang is a train and ferry ride away from Kuala Lumpur.

It is a relatively small town so walking is a way to get around. There are also buses if you need to places off the center.

One thought on “[Penang, Malaysia] ~ Some things to do when there’s nothing planned”