I’ve had the chance to visit US mid this year – spending a day or three in each state. It was not a leisure trip but I squeezed in some fun discovering vibe within my very brief visits to each of them.

This entry them compiles memories of visual treats and encounters of crazy and chaos in San Francisco, Texas, New York and Chicago.

1. Fun colors when I said Hi and Bye 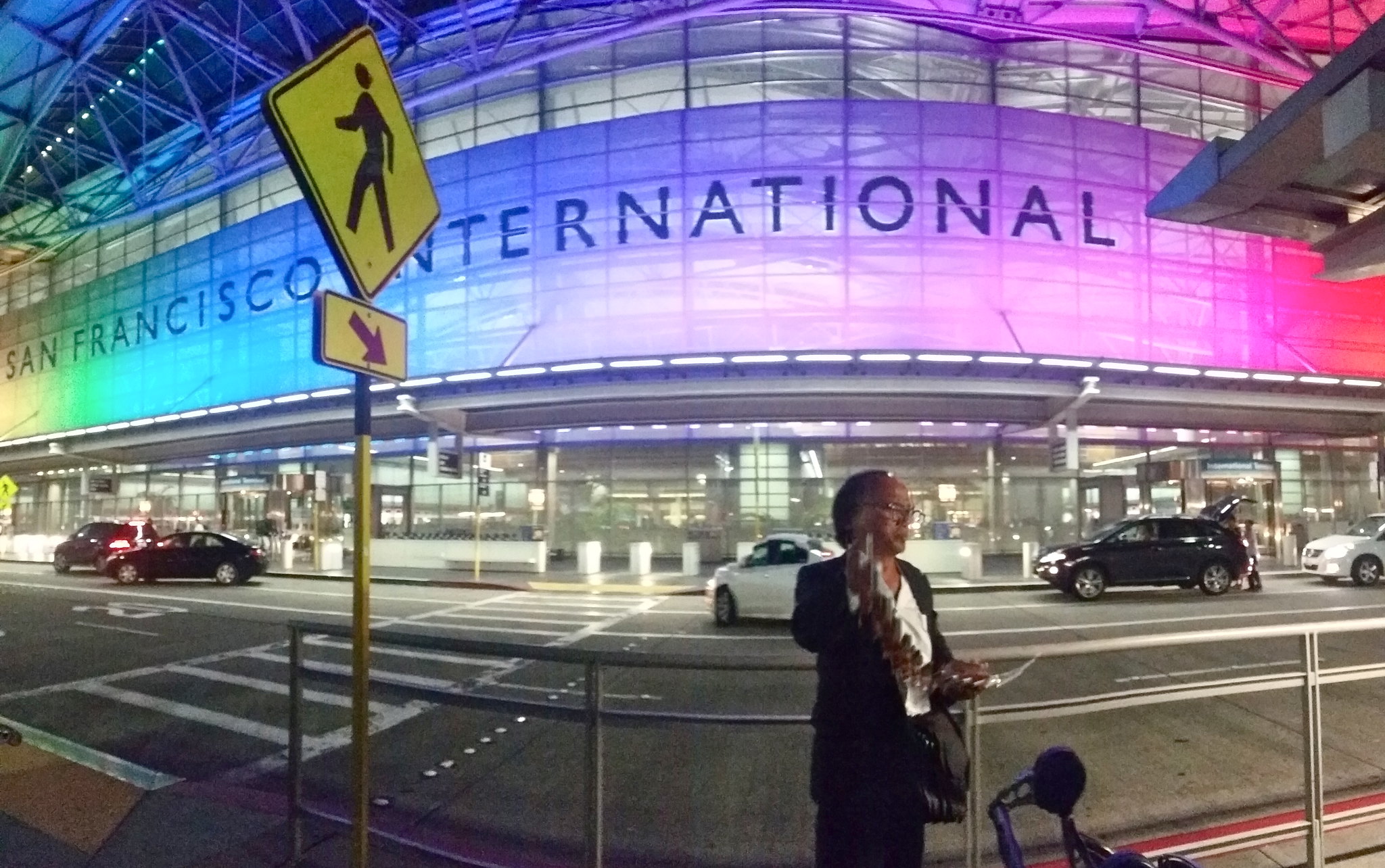 When waiting for the shuttle is this view of the airport…

2. Spots for plane-watching while beer-downing

These are reachable via free shuttle rides offered by most of the hotels near the airport. (If I remember right, drivers did not ask for our reservations so I suppose even non-guests can make use of this facility. As long as one doesn’t get too many seats when there are many guests, I suppose this should not be a problem.) Aside from hotel bars, there are also restaurants from which you get a good view of the runway. A popular one is called Elephant Bar but the seats for this spot are usually taken – for obvious reasons.

It doesn’t sound much I suppose but it to me is oddly therapeutic seeing planes come and go – even somewhat exciting for those who are ‘too’ close it makes you appreciate more the precision needed to fly these giants. 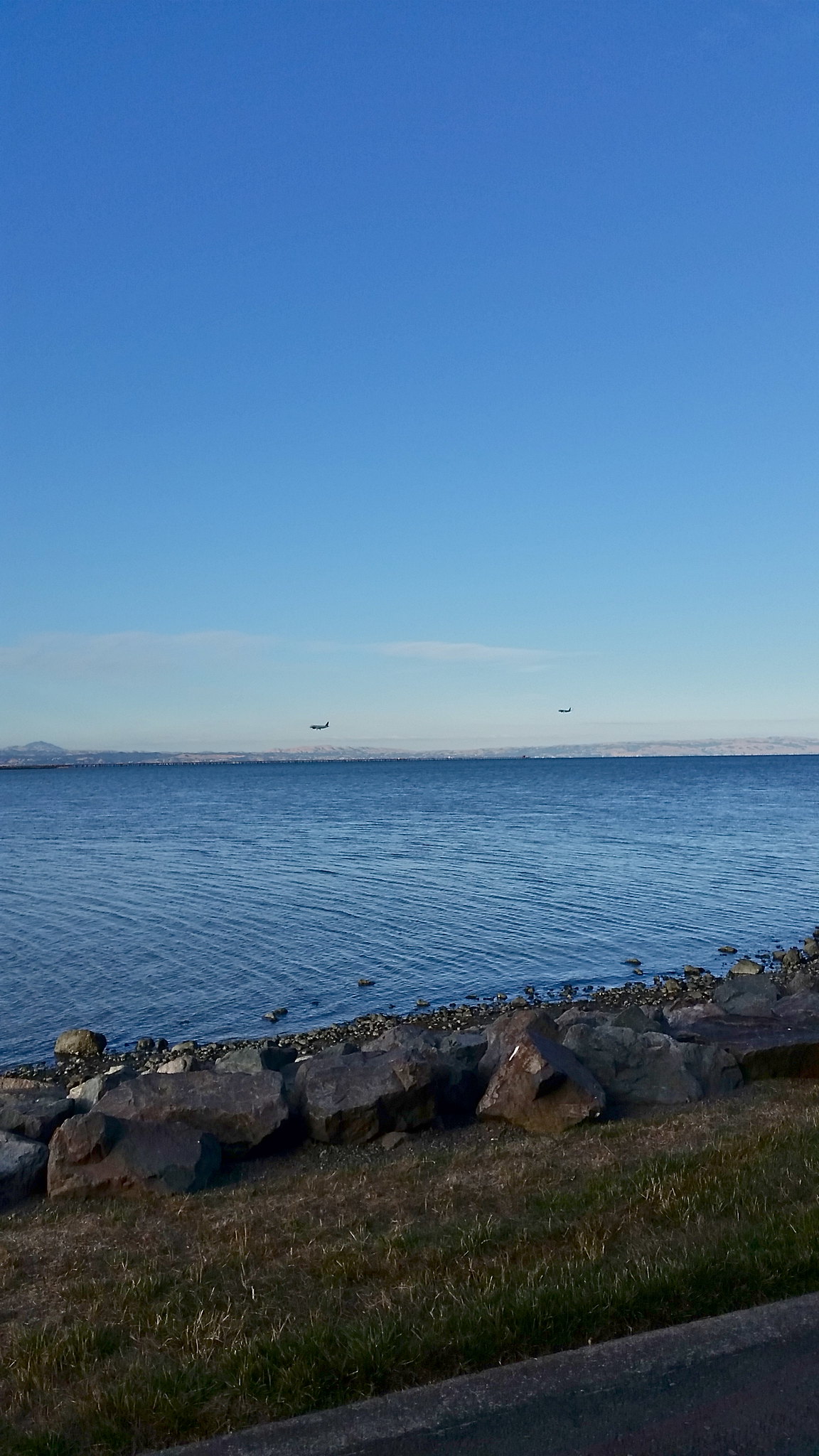 These two as if chasing each other 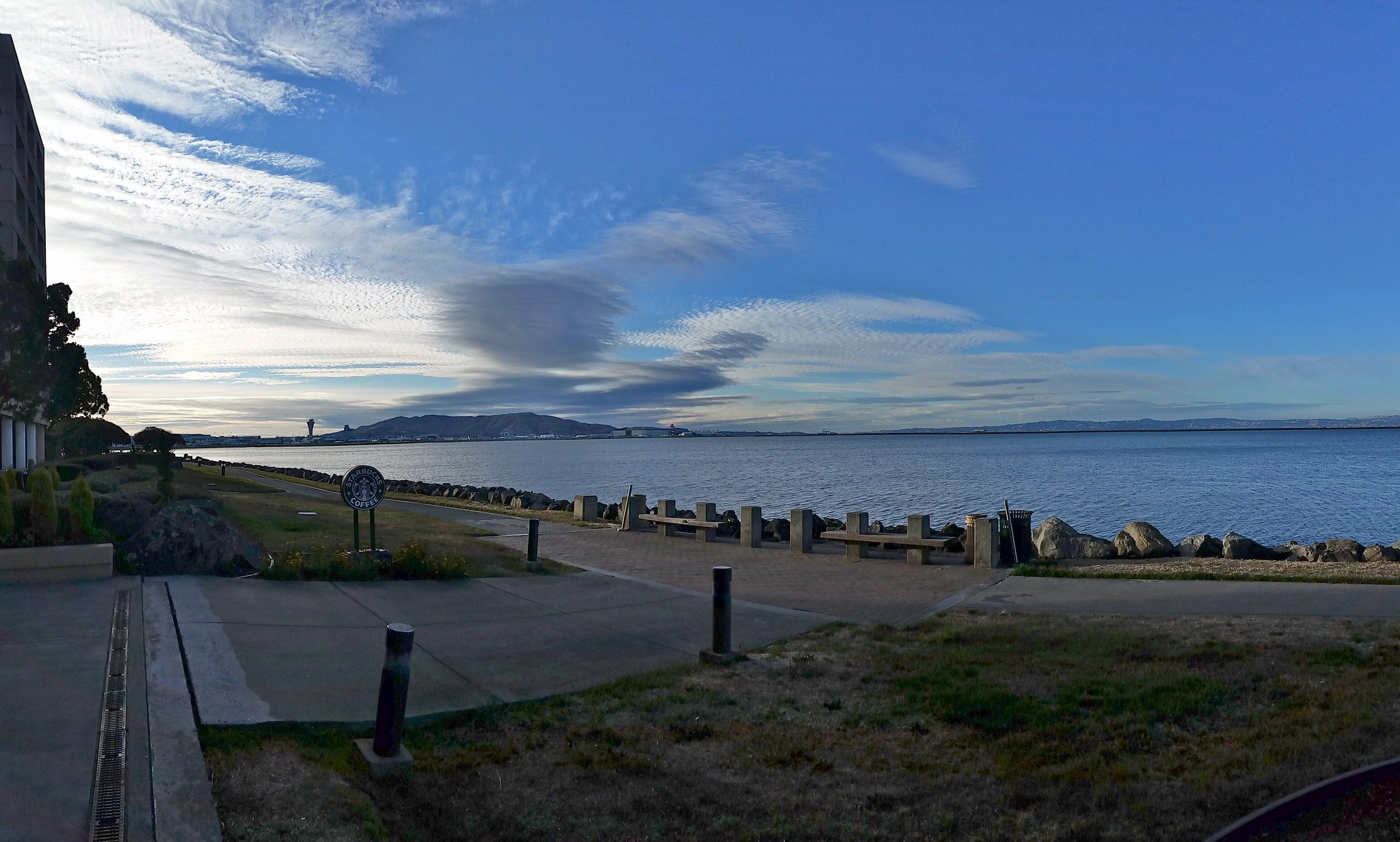 An unobstructed view of the airport

As warned by my cab driver that early morning, he said that there are days of fog which impact on view of the bridge.  This may be a factor to consider among those who really aim to take best photos of this bridge we’ve seen in TV series and movies set in San Francisco.  Also, there are different spots from which to capture the bridge. As suggested by the person at our hotel, my photos were from Chrissy Fields.

I tried a few steps but one can actually walk or bike across the bridge because there is a dedicated lane for that. (Found hours and other notes here). 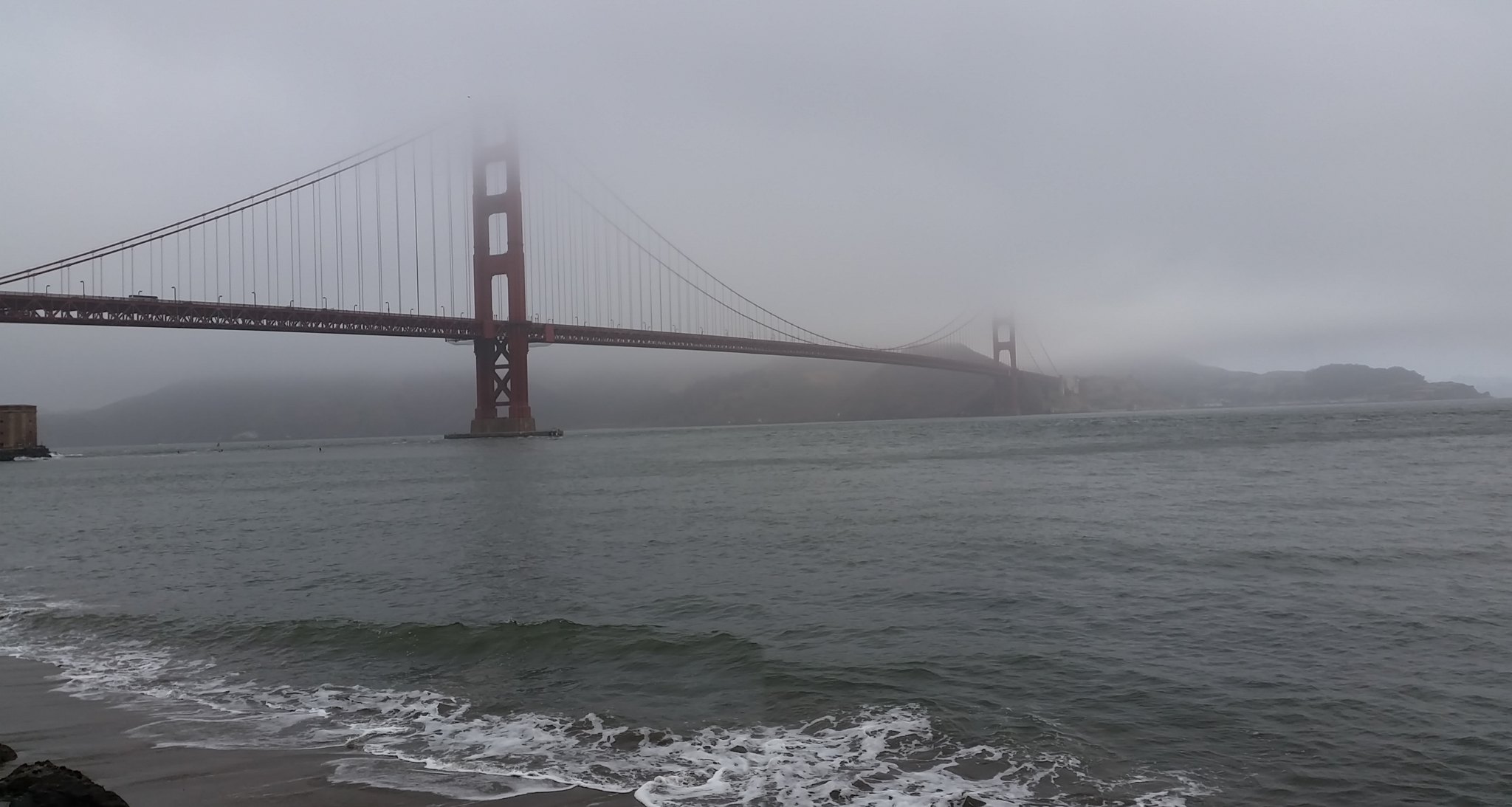 Indeed, it was a foggy morning

Compared to other states, I knew least about this one. Upon arriving though, I was immediately impressed. It was nighttime then (and I had no photo of it) but I noticed that roads and flyovers aside from being big are also thoughtfully laid out that the intersections are complex without screaming unpleasant or intimidating. 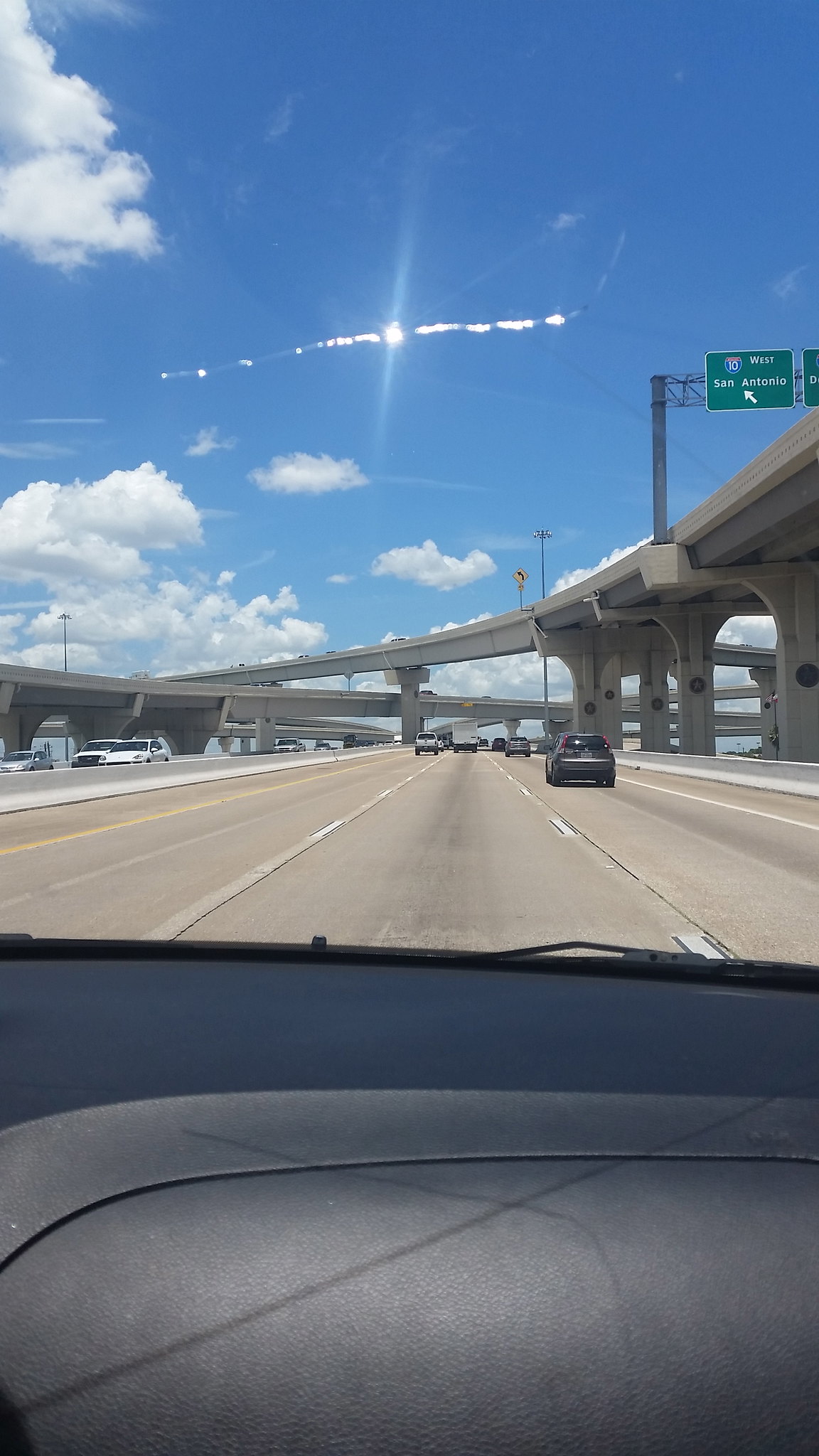 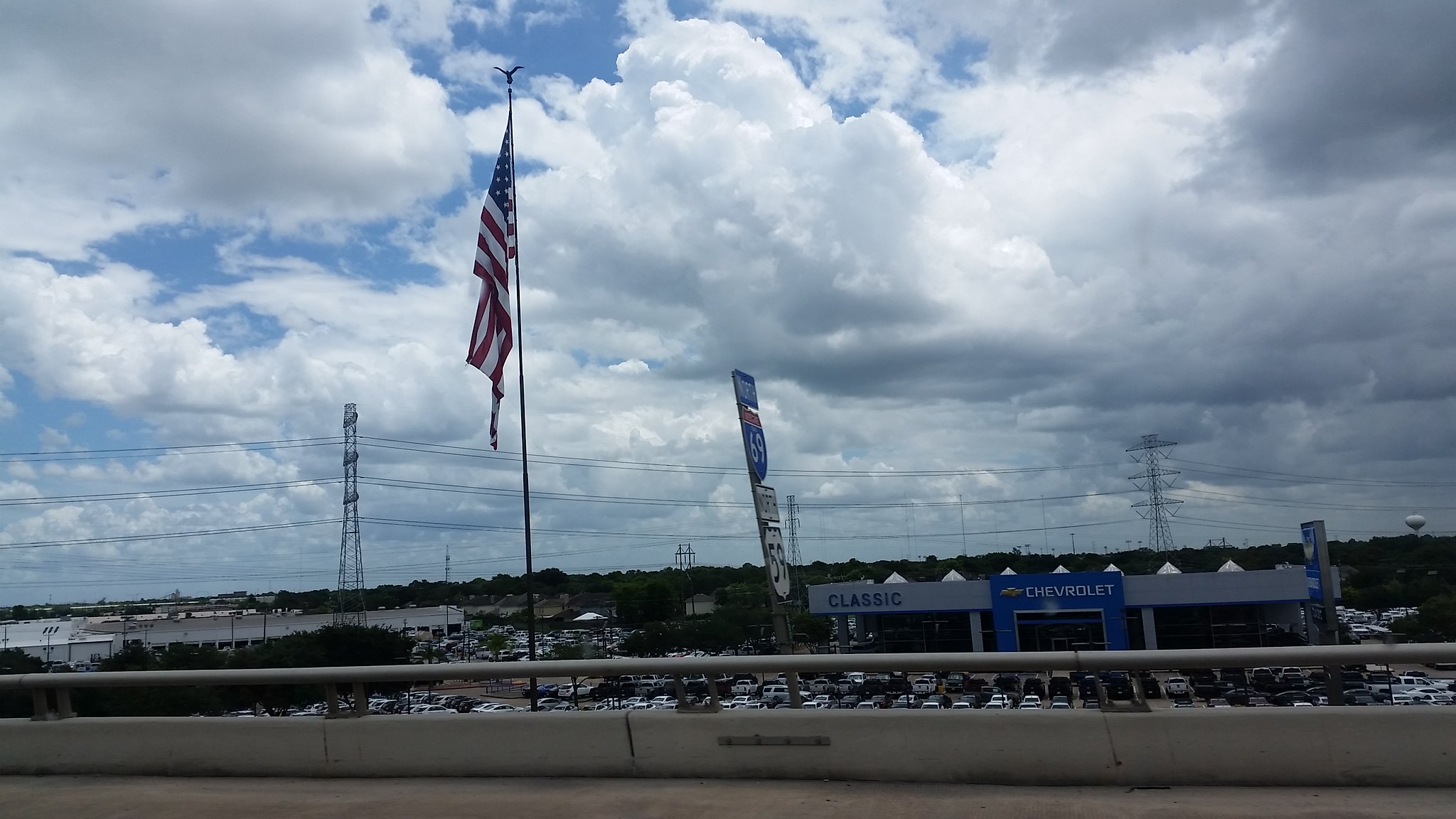 In the midst of this area of eat-outs and shopping is this place called Flying Saucer, named such for many saucers covering almost every inch of its ceiling and walls.  I was overwhelmed with craft beers in the place and while I am a beer lover, I am not an beer connoisseur that when asked what my choice was – I just said “strong but not too bitter (hence I was given some Belgian beer and not IPA). Discovered the place on my first night and came back on my second and last. 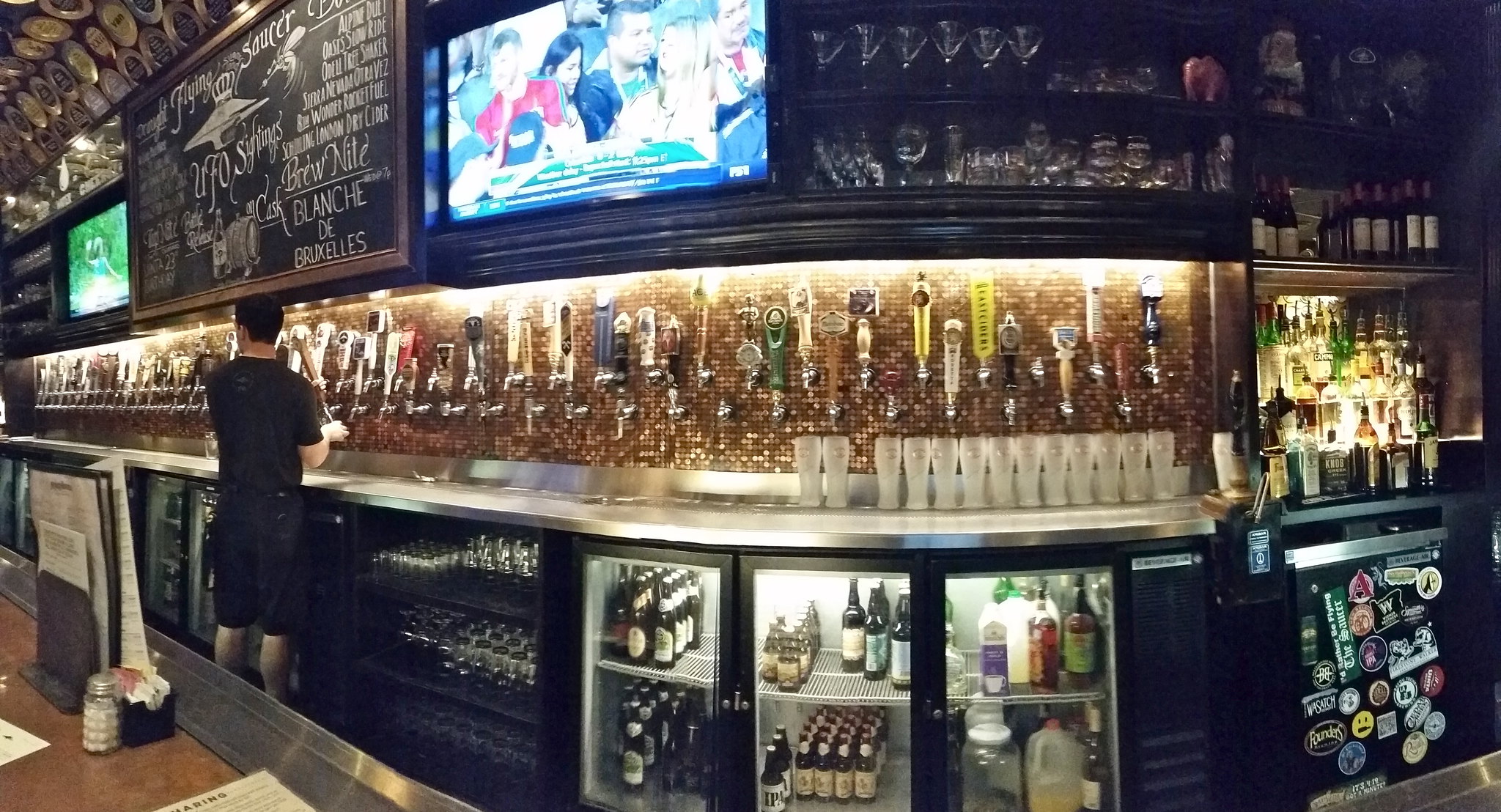 I’d love to have this tap station at home

3. Mystery behind that man from afar

Since the first morning, I was curious with this man who I thought was real – unmoving because maybe he was just happily sunbathing or upon closer look given his bronze was probably one of those street performers. It was on my last day when I confirmed that he is indeed – a statue (and that there are two more women like him on one side of the plaza).

NEW YORK : How I Met its Chaos

It wasn’t even that busy time of the year when people flood this place to watch the ball drop but there was more than enough sea and it was impossible to identify tourists from locals. It was already the latter part of night when I walked around but truly, the city was awake – and with the many people (some may seem too crazy, intimating for one’s taste), I was left with no choice but to be awake too. 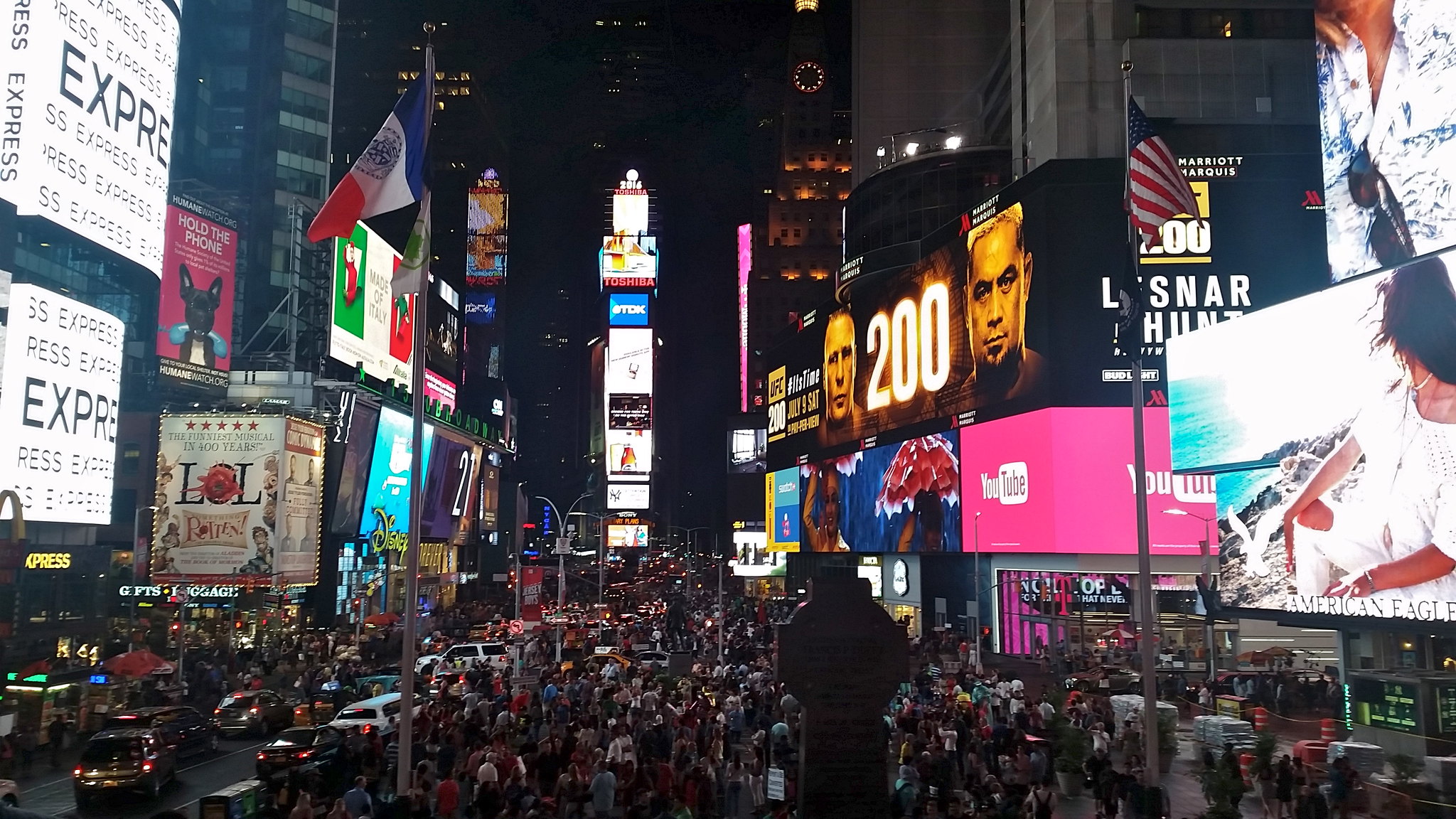 View of the crowd from the also crowded Red Steps

Only for the bold 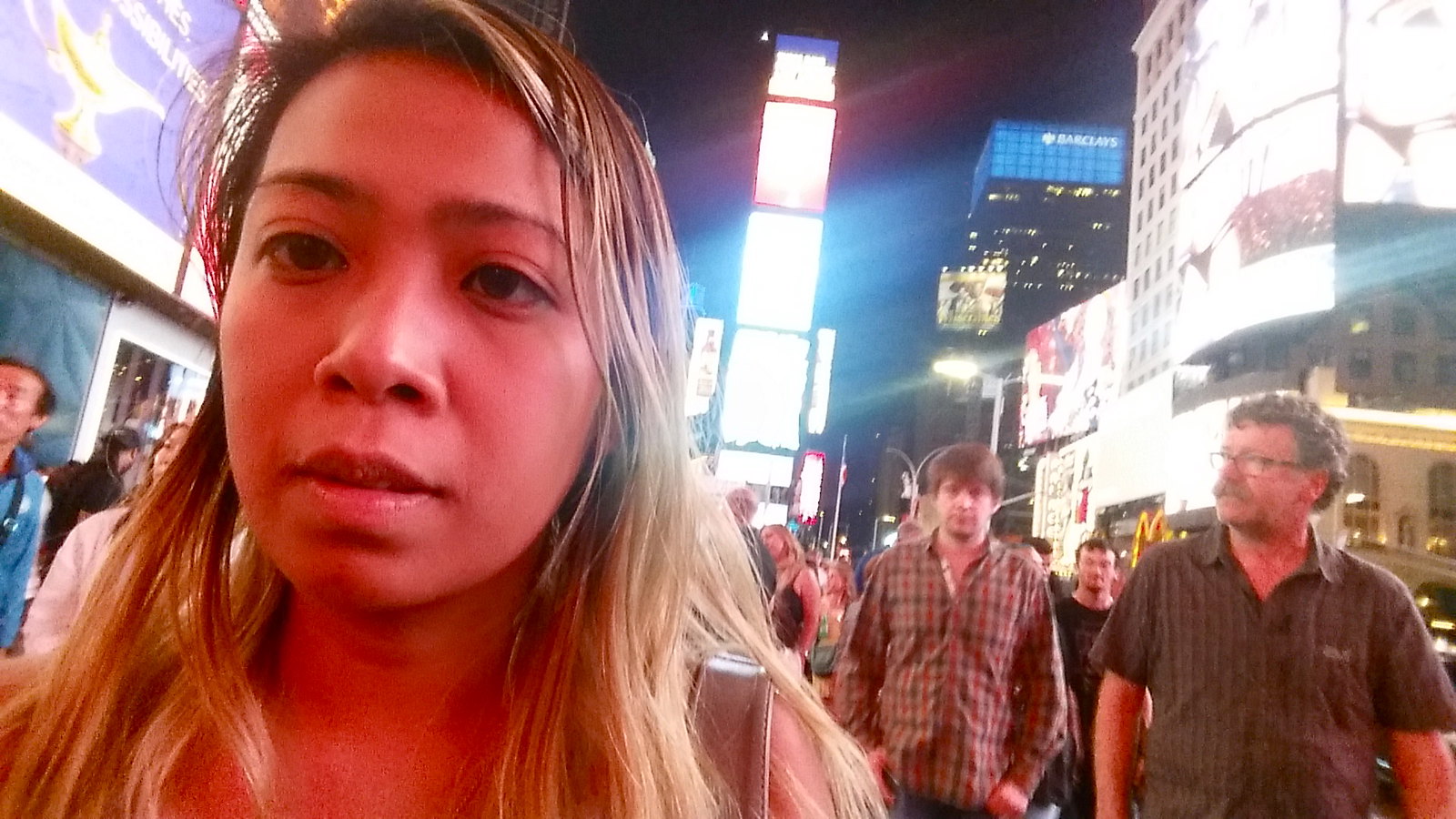 2. Beer in a bar that inspired How I Met Your Mother

Tucked in New York’s quieter streets is the bar which inspired the creators of my all-time favorite show How I Met Your Mother. Called McGee’s, the bar took on this identity via its walls adorned with photos from the show and the cast of the show visiting the place. They also have interestingly named HIMYM-inspired cocktails. 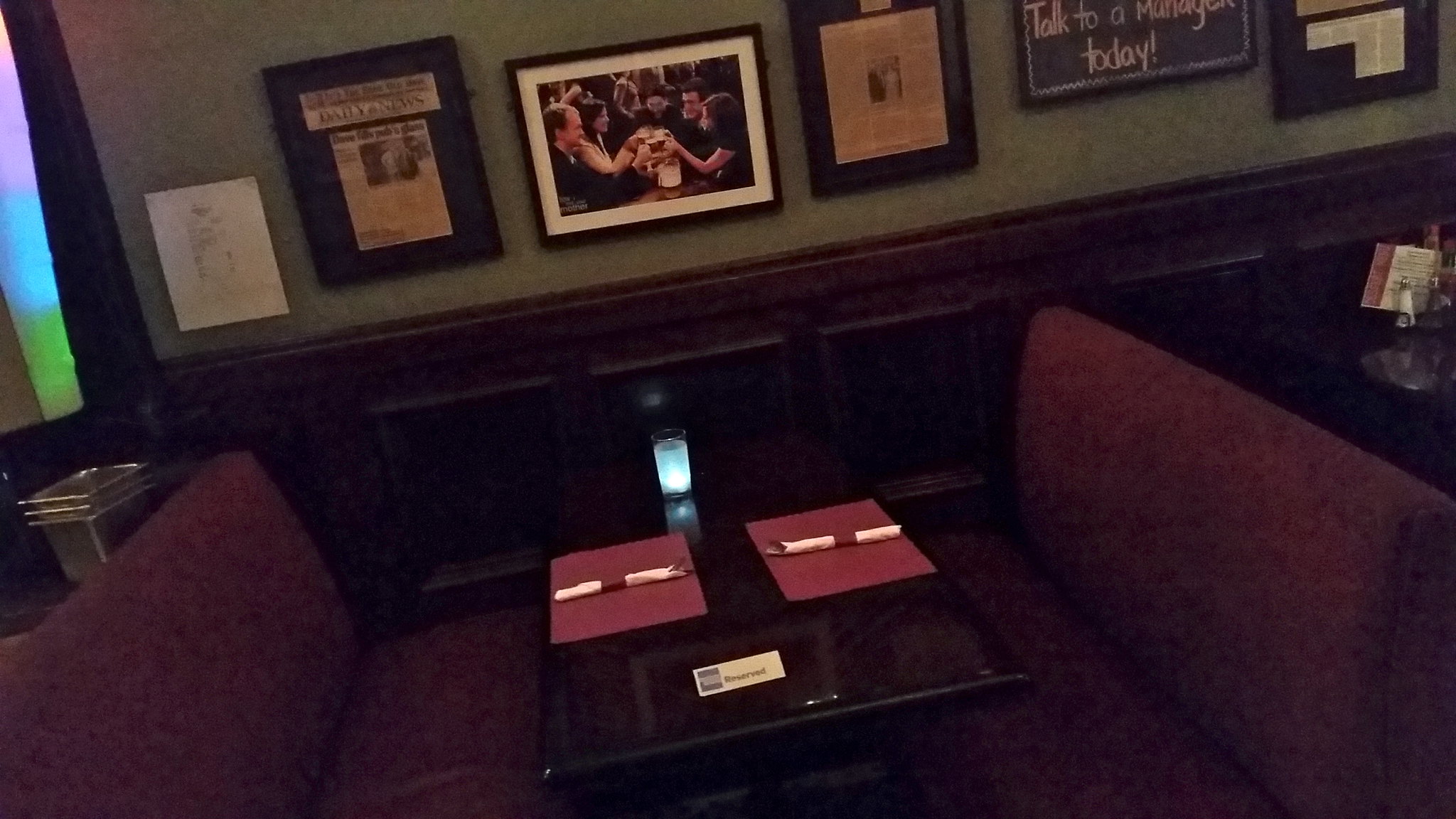 3. For the love of dogs in Central Park

Central Park is often used as setting in TV series and movies, from the romantic to one crime dramas. During my quick visit there one morning though, what is most adorable is how it is a common space for humans and their canine friends. I spent time sitting on benches to people-watch – and unexpectedly, they would be most of the time walking or jogging with their cute dogs. 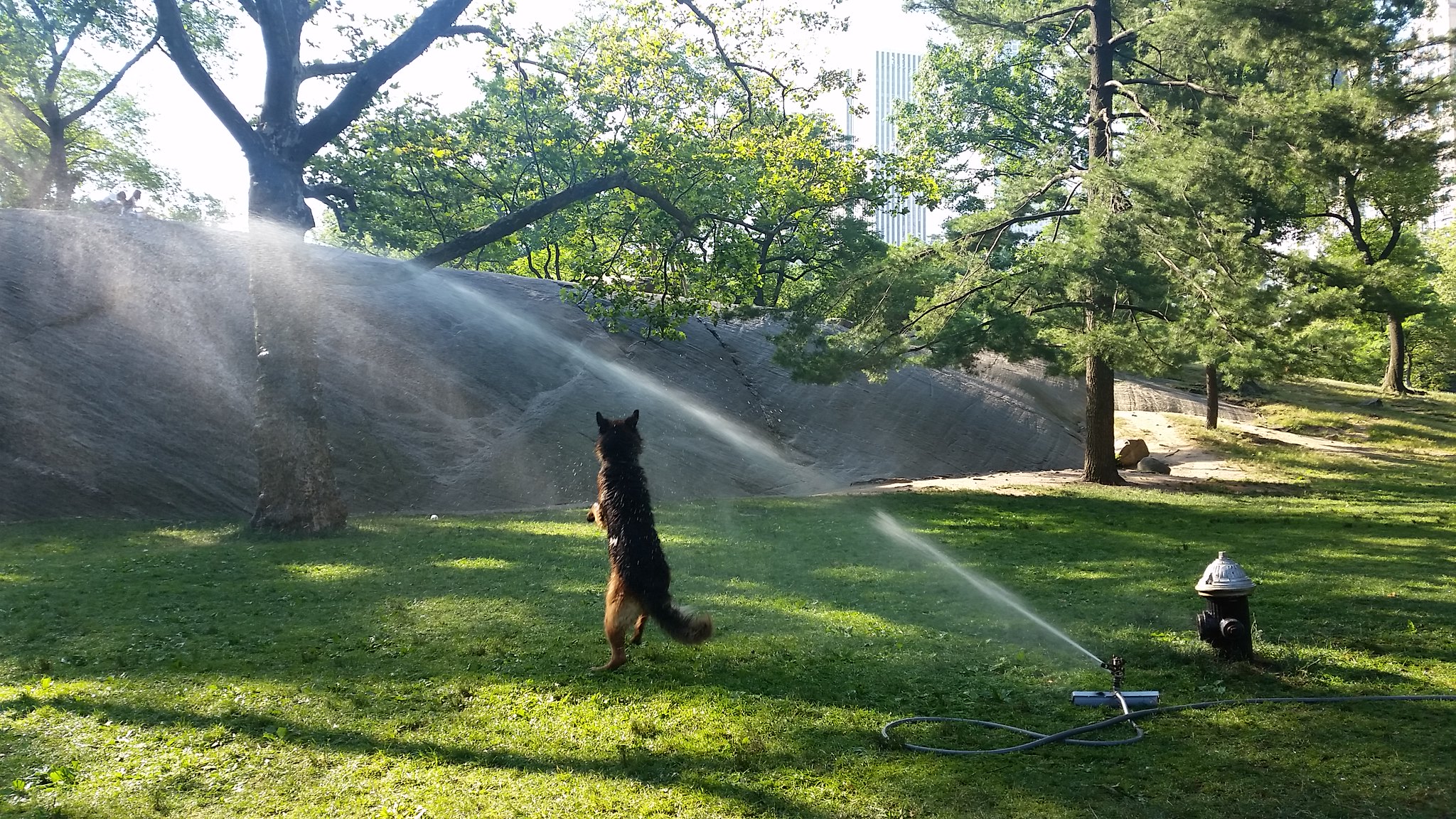 CHICAGO : Landscape photos in the city

1. Drawn to a skyline as if drawn

In every place, there is always that space between land and sky where what’s man-made and grounded has its backdrop of what’s universe-made and out-there. True, each is unique but among those I’ve seen, Chicago has the loveliest . It was as if the buildings were drawn by a single artist and made to fit perfectly on its bluish and pinkish natural background.

At first I could not understand what’s to see in a giant bean when a colleague told us about it. To my surprise, it was no loner as Mr Bean as many others also find it interesting. Initially, I was distracted with the panic of having to have my souvenir photo with what seemed to be an iconic structure that I was missing on what is actually beautiful about it. It was only after about walking around the bean (literally!) that I felt what is fascinating about it -it reflects the beautiful skyline! It acts as a mirror to that beautiful skyline and so the crowd becomes tolerable. 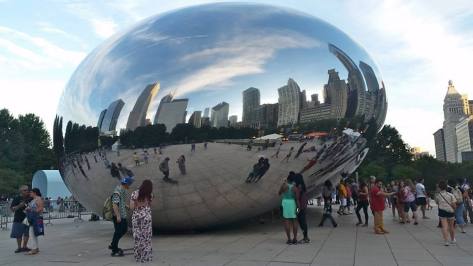 Bean-fie (selfie with the Bean) 😛

3. This lovely lake, unnamed ’til this day

About 5- to 10-minute walk from the giant bean is this calm body of water. I was again surprised at the unfiltered beauty that can be created from this combination of what’s natural and man-made. There was clear sun-setting unlike in most water I get to be in during day-end but it is one of the most memorable sundowns for me.  There was a calmness to both the sky and the water which the sun does not seem to want to intrude into.

This – and the ducks are fun to watch too! 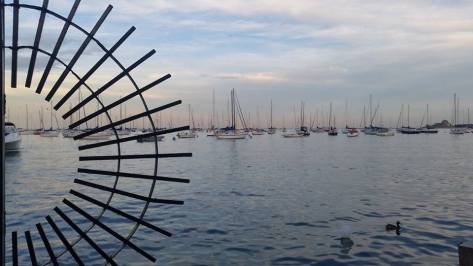 MISSION DISTRICT, SAN FRANCISCO: Getting my dose of crazy

I’ve always loved aimless walking when abroad because it allows me to discover what are interesting. As I am no selfie expert though, most of the time, I end up taking photos with no ‘me’ in the frame. That is, except for memories I personally attach to those photos, there is no stamp to those photos as mine. Except feet selfies, which I also love to take because it shows  a piece of me on same frame as things I like.

So — imagine my happiness when I discovered this district which smelled of fun to walk around in and on – with kinds of art etched on its pavement. 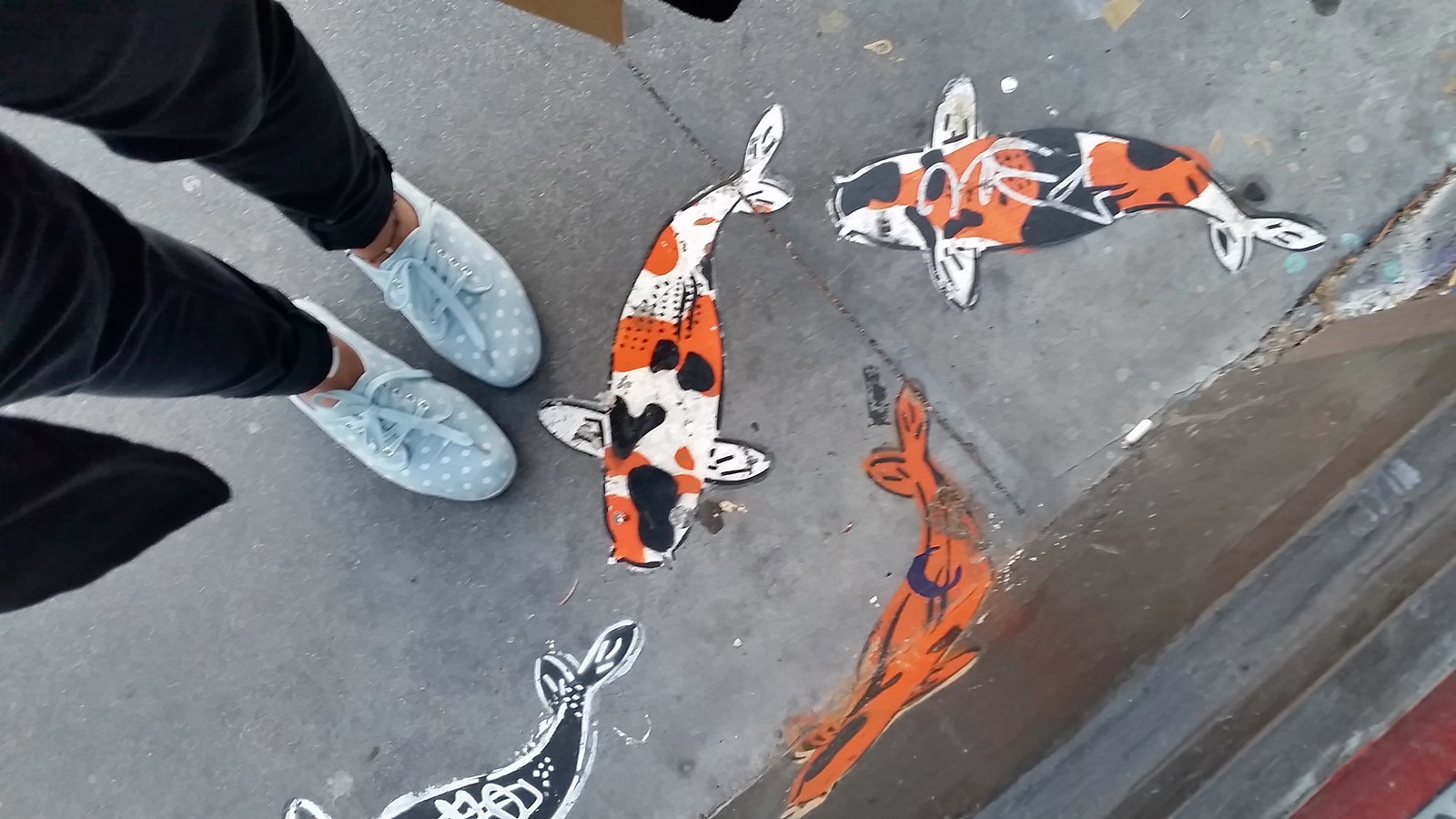 Koi but not on water 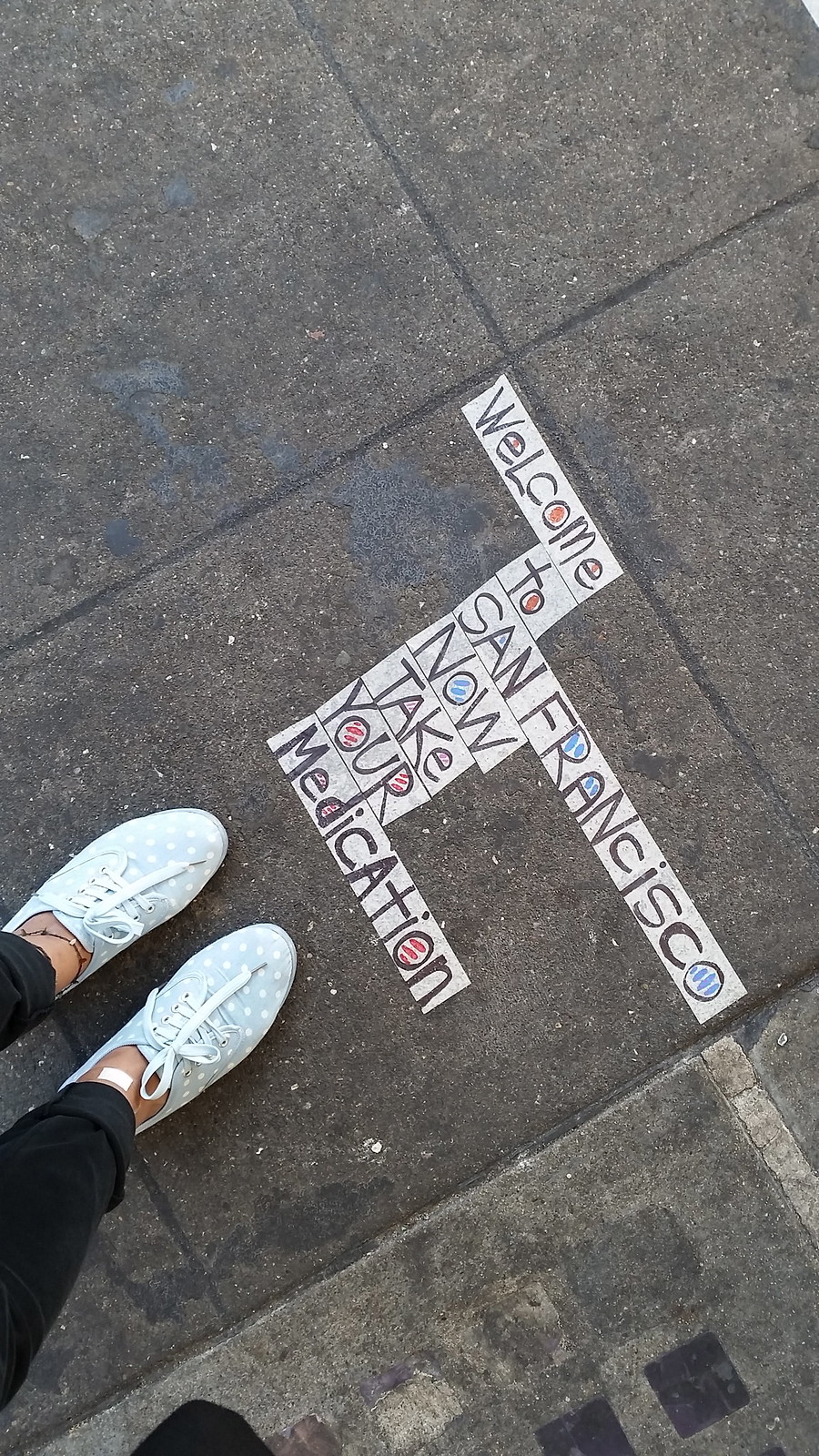 Chance to fix your crazy 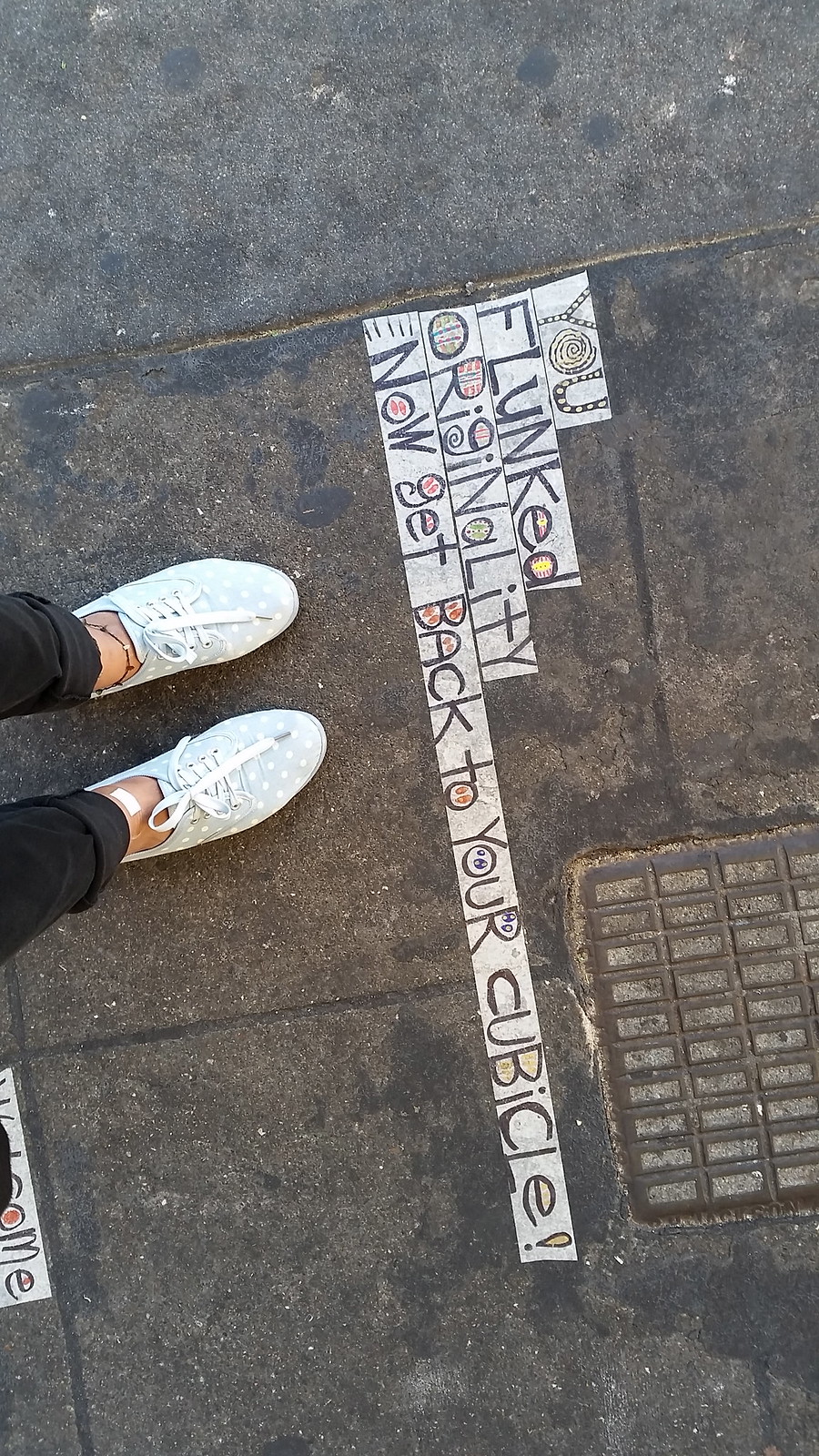 It was a relaxed afternoon on this giant lawn of people and dogs having picnics. What is more interesting though is this occasional smell of (what I think) is green. 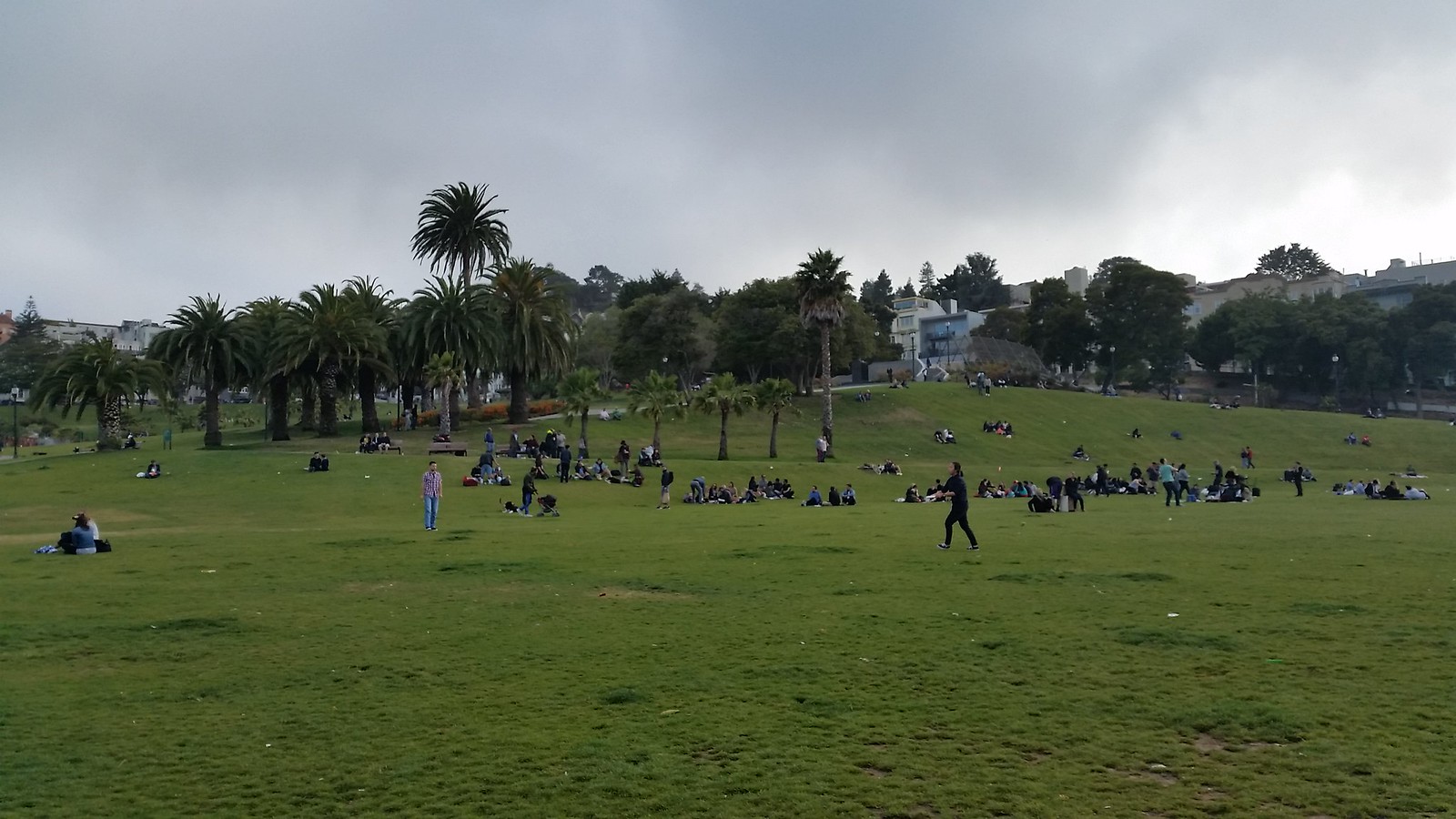 I’ve read this part of Mission District some time prior to the trip but never intended to go to (because see, I was walking in the area aimlessly). For that, I was just grateful when I accidentally came across this alley of murals, mostly social relevant ones. 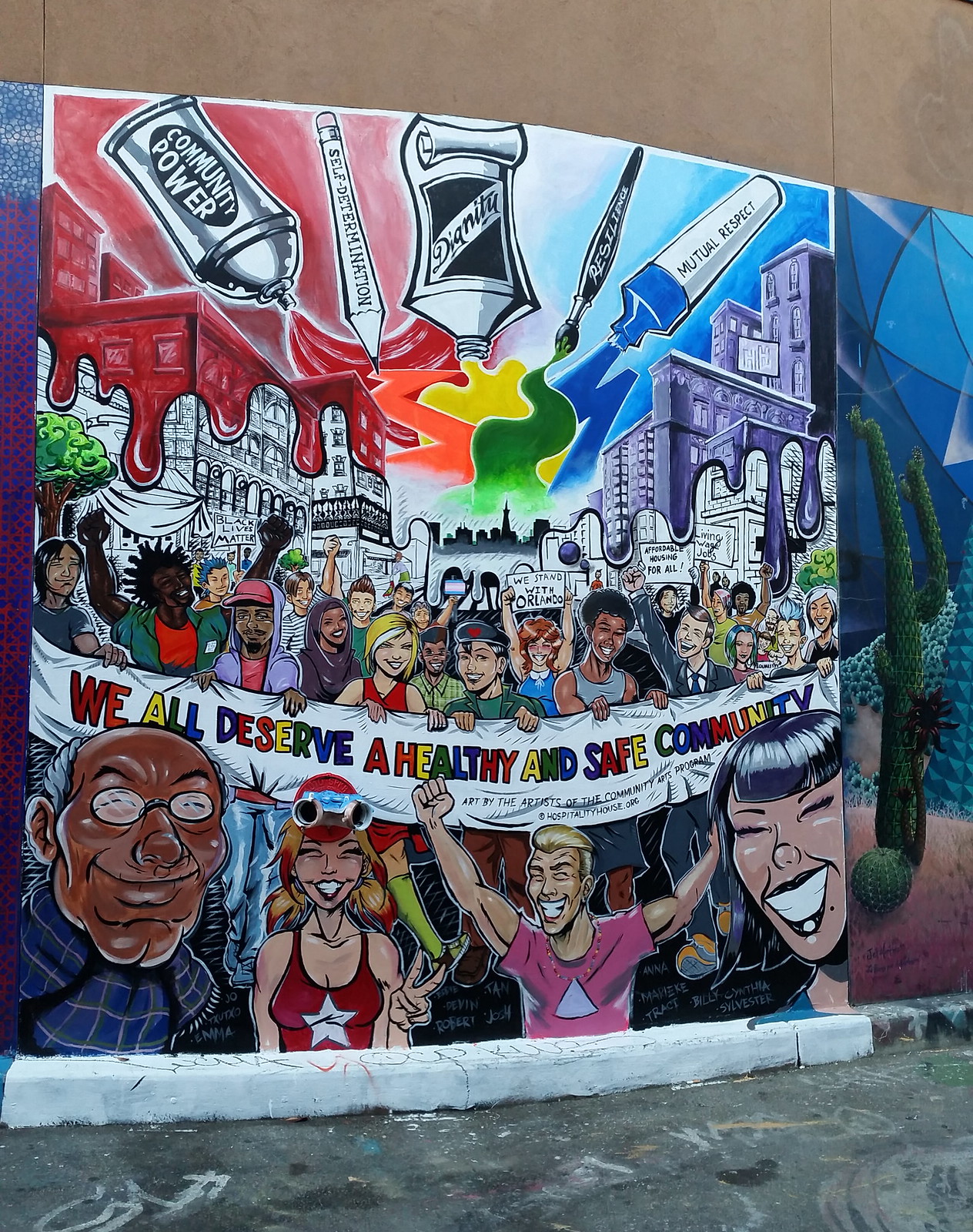 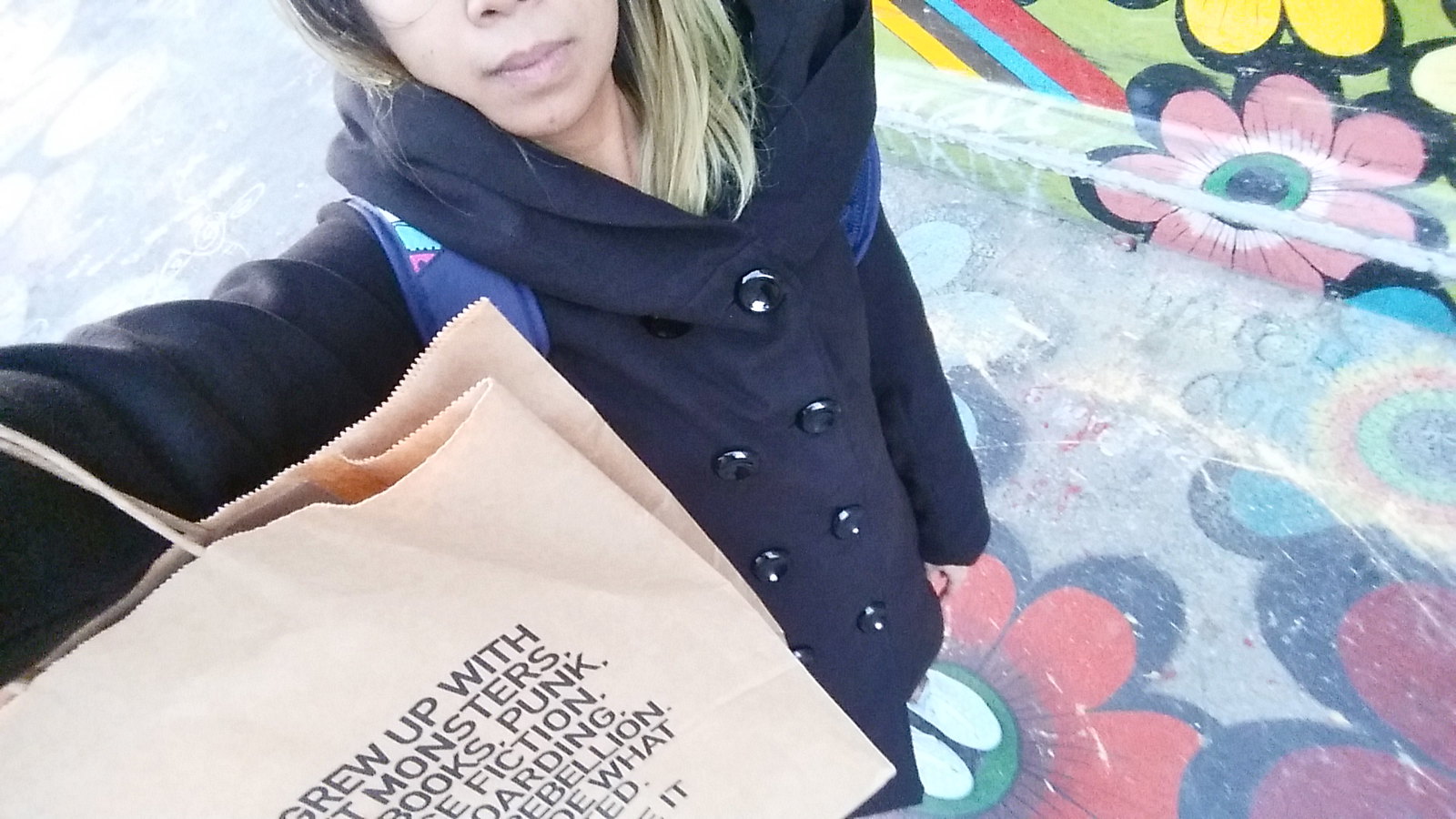 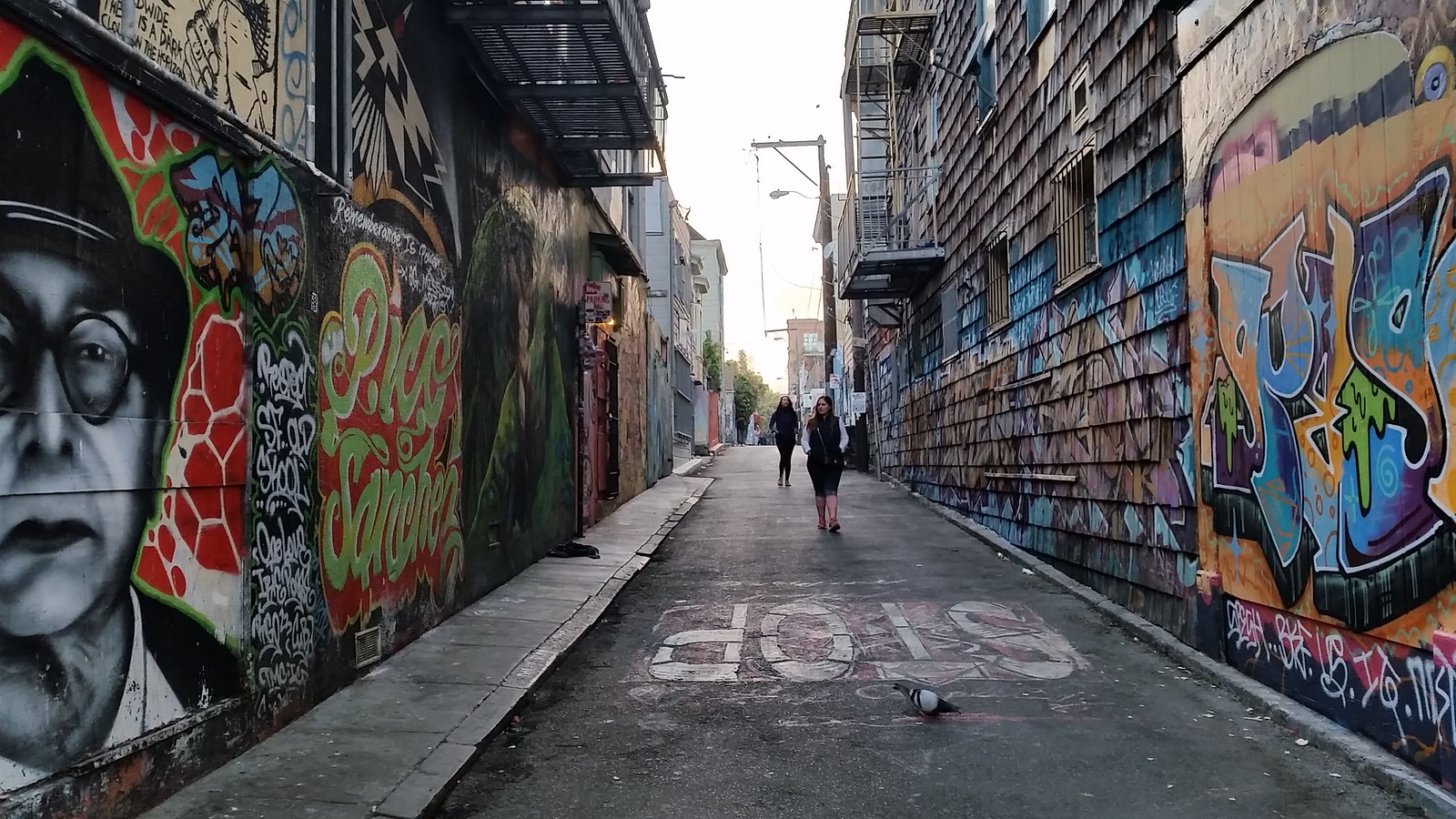 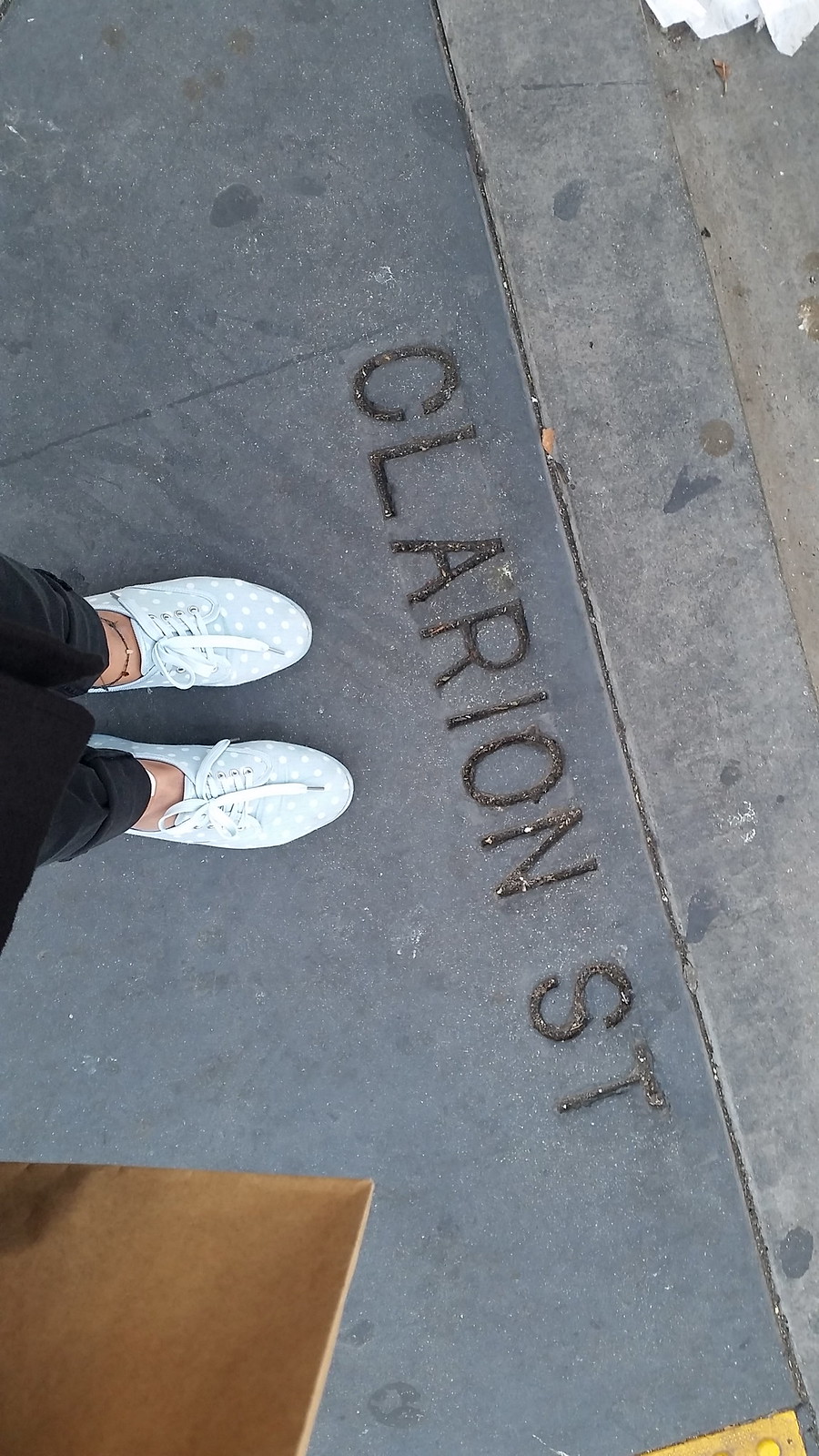 And we see again my shoes

SAUSALITO :  Intense getting there to a quiet, low-key town

1. Ferry ride that almost wiped out my face

This ferry ride from San Francisco to this small town is rather popular (apparently even called the second most exciting ferry boat ride), not only because it is accessible and not costly but also because of its offered view of other landmarks like the Golden Gate Bridge and Alcatraz Island. For me though, what is most memorable is the experience of my face and hair fighting with the intense wind during the trip.  (There is an option of course to not stay on deck but hey, I chose the view). 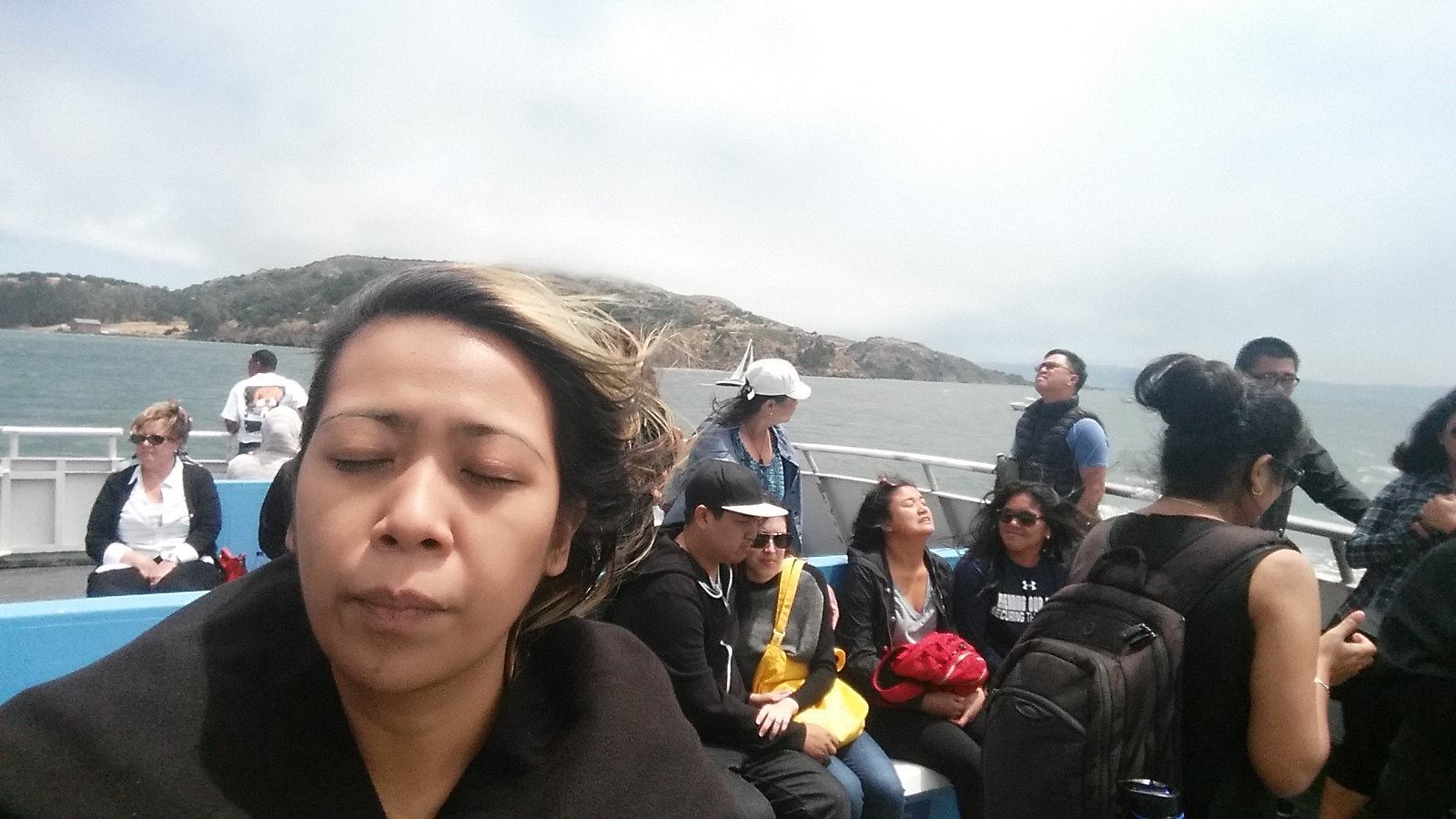 2. Stack of houses a deception

It’s this view that both welcomes and bids goodbye to you if you leave the town by ferry. Rather deceiving though because while this looks crowded, town screams at stillness, quiet of life (yes, ironically).

Walk around town made me discover the simplicity of life in this place – with only one major road lined with just the right amount of food and shopping establishments that separates the busy port and quiet hillside where homes are perched. As I traveled this road, I noticed that public transport is rare which makes feet and bikes as tools to get around.

3. Even what are commercial are simple

Testament to simplicity of this town are how its commercial establishments seem to be of homegrown. No major franchise brands for places to eat and shop. At least from the part I get to explore, there are only few establishments too that it is easy to spot the places popular for burgers, or tacos with people in line or seated in wait list chairs. 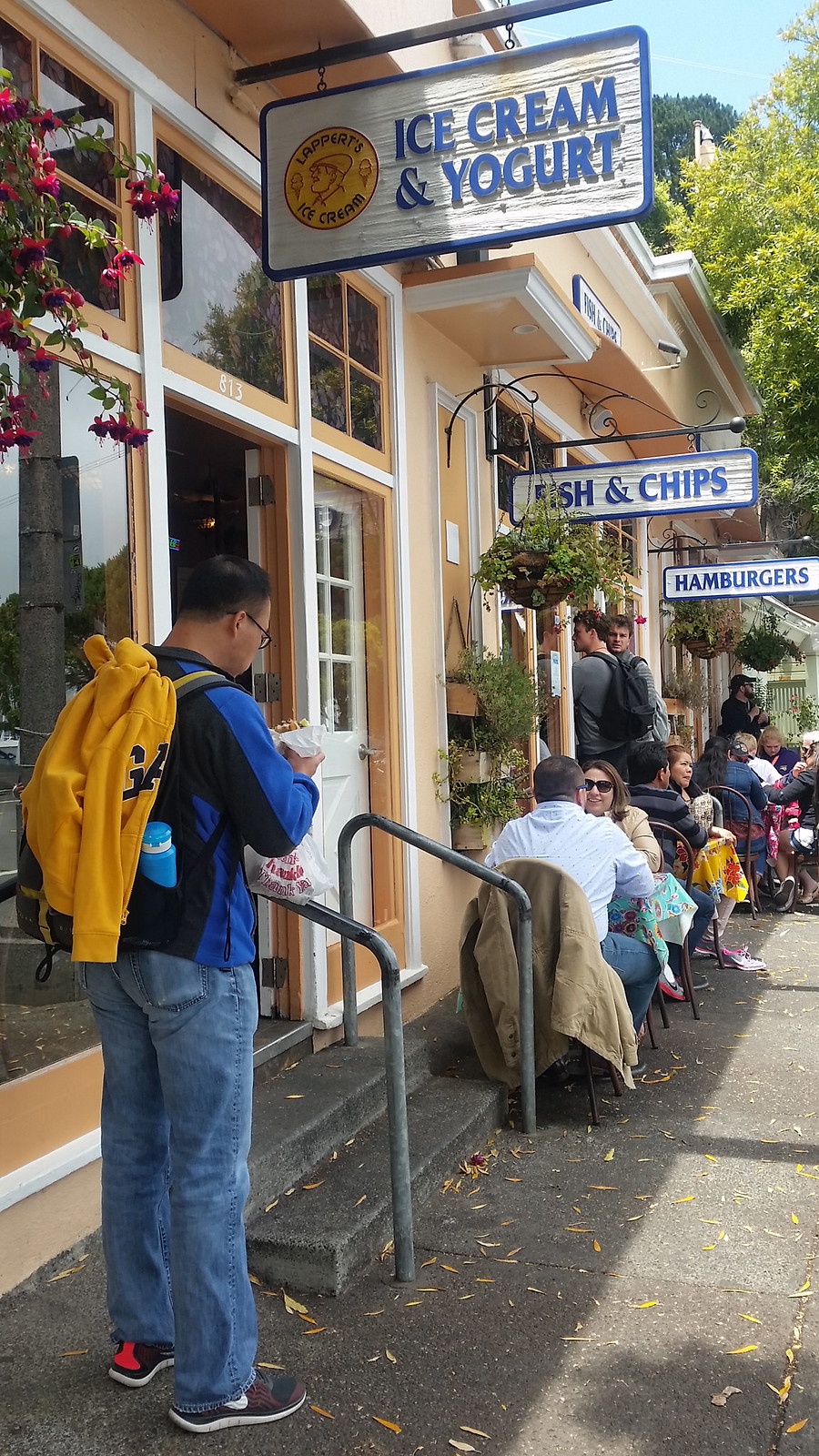 I’ve had this perception before that US is not one exciting place to go to – maybe because I don’t imagine the kind of crazy so obvious in other countries. Discoveries from this trip however made me think again. My visa expires in 2019. I hope I get to discover more of its shades soon.