After learning about instant ramen is this instant connection with some parts of town – 10.03.15

It was only MOMOFUKU ANDO INSTANT RAMEN MUSEUM  that I was after in Ikeda but town ended up to be an instant favorite that I ended up killing extra time eating at AZUMA, one of the oldest udon restaurants in Osaka – my way to which I found with help of a woman who after realizing I could not understand a single Japanese walked with me to what I was looking for. Just when I was about to go back to the station was this surprise of a UNNAMED PEDESTRIAN STREET with all kinds of food stalls, some ‘fishing’ (from fish to balls) games for kids and magic even! A refresher slow-paced walk since my first two days of tourist spot-hopping during my first two days. 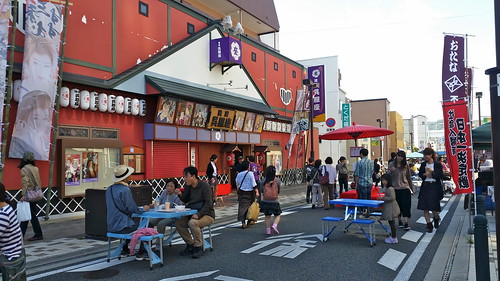 Not part of the plan but I decided to extend a bit of my stay in town just because I came across this brochure at the museum that said there was this long-running place for good udon nearby. That plus how the map was laid out easily it seemed to me I could explore without getting load.

This udon place called AZUMA was pictured as within walking distance on a straight road that I felt confident. It was only after getting past quite a number of major intersections that I doubted myself and felt it was time to ask for stranger help. It was not a tourist town so there was not too many people I can ask. When I saw an old lady, I had to take my chance.

Then when I popped the question and she just stared at me, I realized how I was not in one of the more touristy towns of Japan – so this conversing in English is probably going to be extra challenging.I almost felt it was a lost case but even if she could not respond to me, she suddenly moved her back and looked at me as if telling me she knew that place on the map. We didn’t exchange any familiar word but I trusted her and my instinct that she meant well and was willing to help. She did walk me until that udon place. 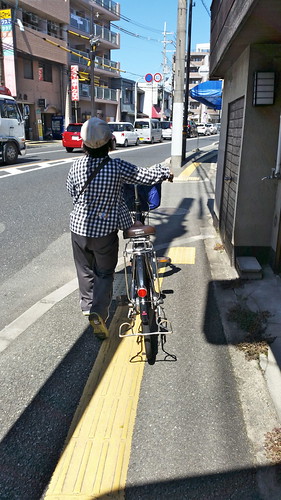 And I was too shy to ask for a picture so…

This udon place was apparently a hole-in-the-wall on a not so busy street. I could tell though that it was known among the locals because I was on a waiting list. Since I was alone, it was not a long wait though.

It was a small place and most of the customers at that time of day (around noon) are working people in twos and solos, except for this family pictured below. As I sat there waiting for my food, I was just observing people and thinking some things I like about their ways in Japan – it is common / unstrange to eat solo while sharing a table with a stranger and beer is typically part of every meal – at any time of day. Latter though something I cannot do as I am not fond of eating (heavy) when drinking. 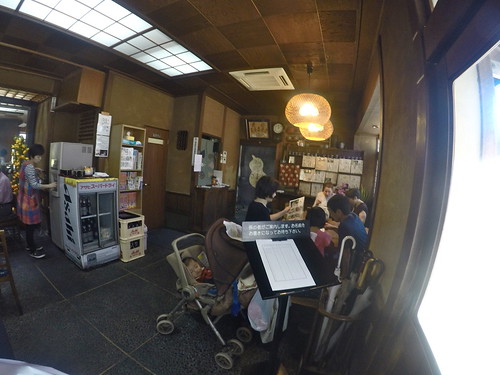 Most 1s and 2s in this place except for this bunch 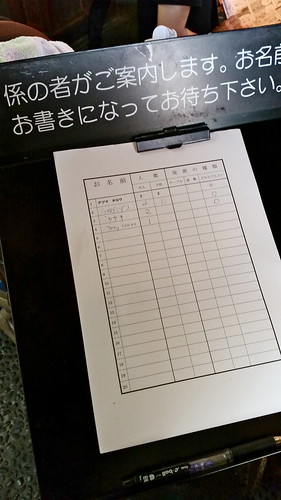 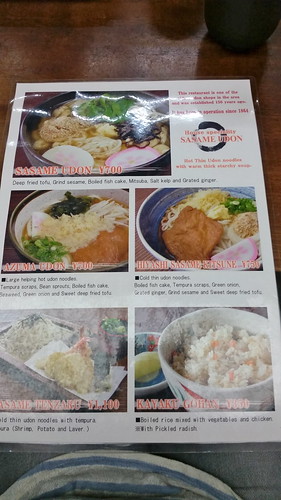 Menu kept simple. I ordered sasame udon which felt like the staple 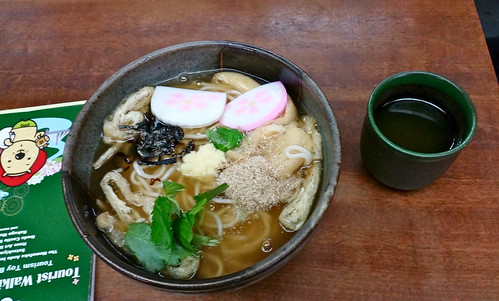 Not ‘food-ographic’ but good. I would still choose ramen though 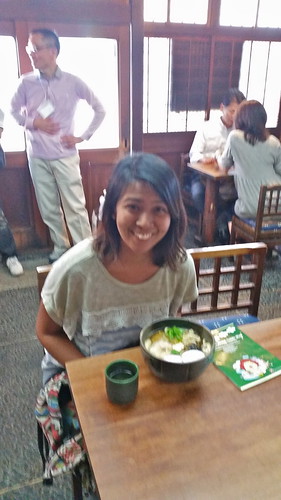 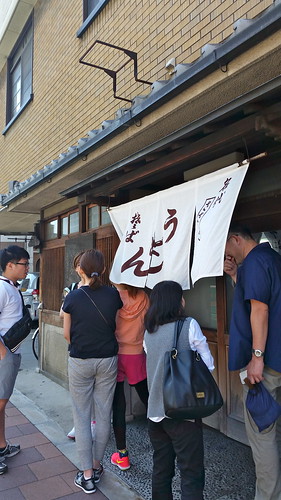 When I was about to leave, a longer line there was

I cannot remember exactly why I decided to go off-route but I found myself walking the other way than back to the station. I was happy I did though as I discovered this street which was exclusive to pedestrians (am just not sure whether as always or occasionally). Food and game stalls line the street and after minutes of walking only did I realize that this was a space for kids. There were sorts of games – most of which are actual fishes and balls the kids are supposed to ‘catch’ in basins of water.

There were stalls for adults though too. I remember scoring a 250 yen used bag. That was a steal considering that that price can only usually get you bento box. 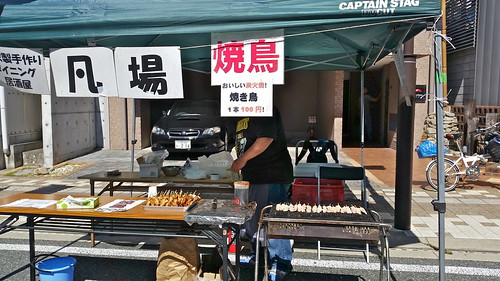 Some street food and its mysterious vendor 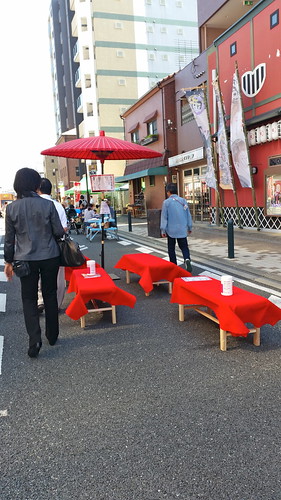 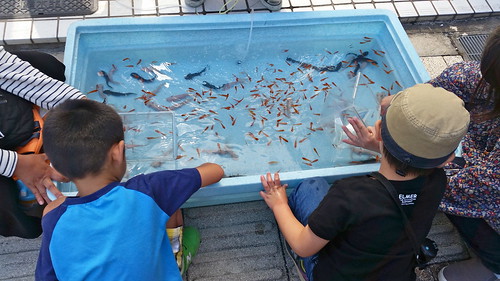 I feel sad for those fish though 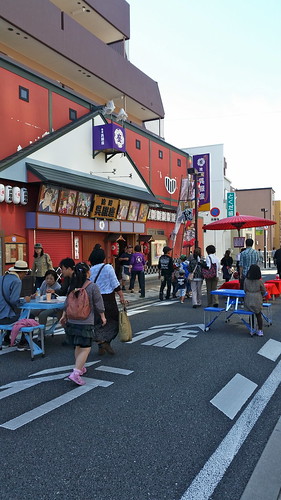 I vaguely remember that this red building is a ‘spot’ but I am just too lazy to check again but yey, it was some picnic day 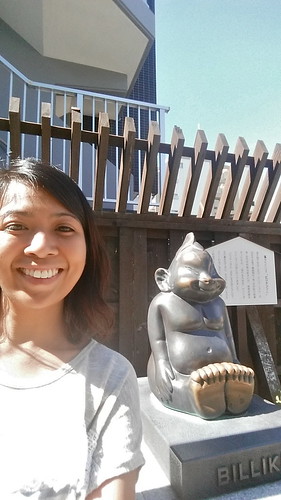 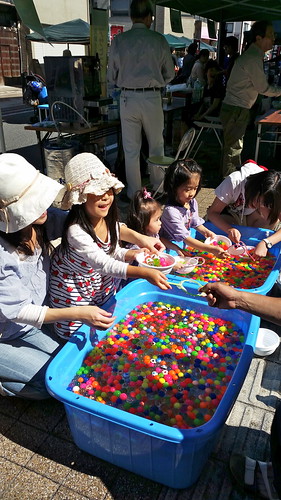 From fishes to balls 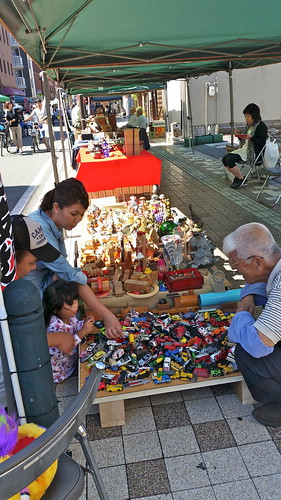 And some random toys 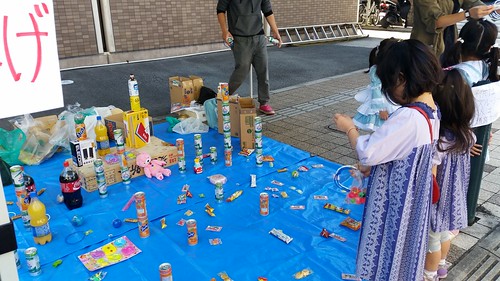 In this digital age, these casual games are precious 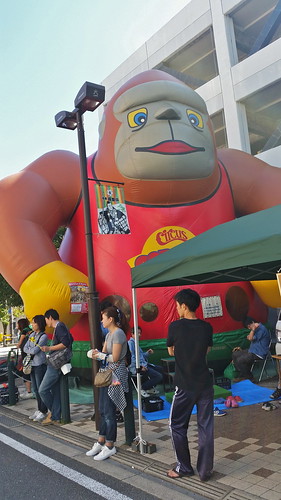 … and then this giant monkey 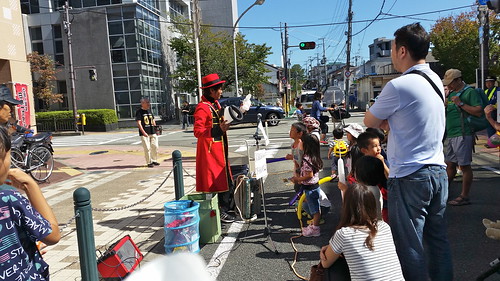 Look at how that kid looks at the street performer

I just kept walking on that street until I came across to the right what seems to be towards some kind of market. Despite my limited direction skills, I just knew that this was towards back to the station that I decided to just go ‘in’. I think place is more alive at night but there were some interesting shops I checked. One of which a kimono shop but stuff were expensive I ended up getting some Japanese split-toe socks as a take-home to a geisha-loving relative. 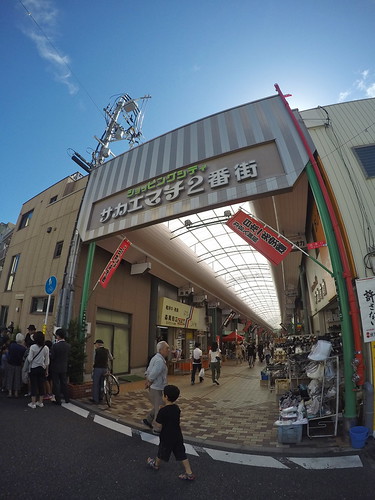 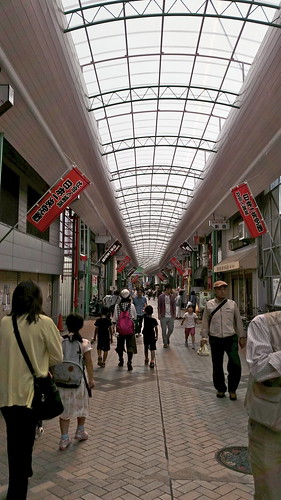 Less busy but this follows ‘ frame’ of most (covered) Asian markets 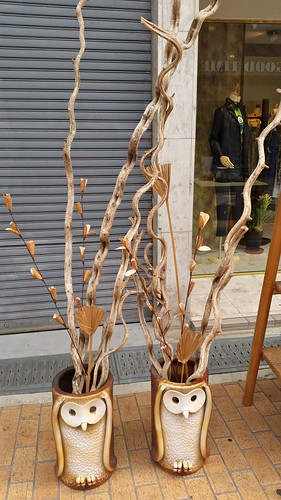 Because owls are fun to look at 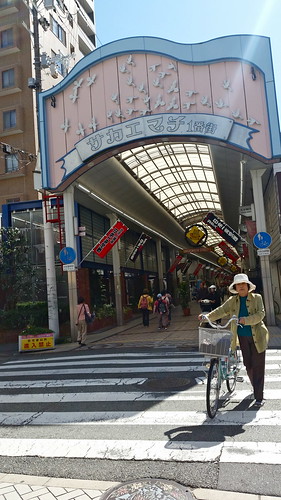 I ended up here! Which is indeed close to the station

(Nope. She was not the good old lady from earlier but I do wish) 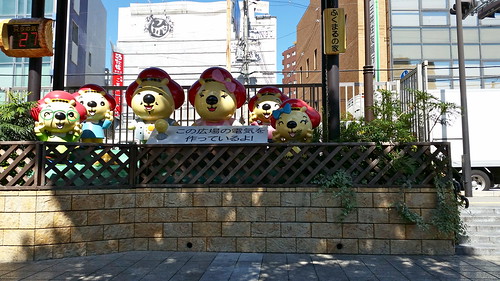 These place likes to infest itself with cuteness, apparently 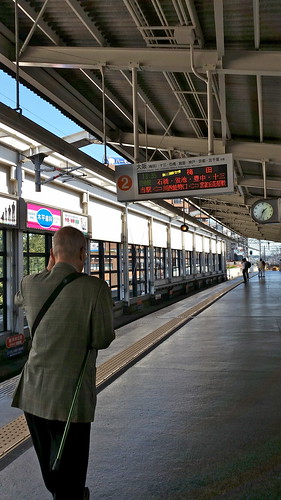 On the way back.

So my encounter was all about goodness, calm and kid-friendly. Only later that day would I realize that that place had a dark history of a school massacre, a category similar to that of sarin gas attack in Tokyo subway. Well, every place got its history, right? Hmm. Interesting.