It could be the darkness amidst what is million years older than I am, the chirping swallow birds that is music to my ears or the calm as it felt like it was drizzling, but it was nice meeting you and see you again. – 06.23.13

Having come from a cancelled trip the previous day, our third and last day in Puerto Princesa took on the trip’s highlight – the Underground River tour. Recently labelled as one of Seven Wonders of Nature, our visit that day made me realize why it lives up to such title. 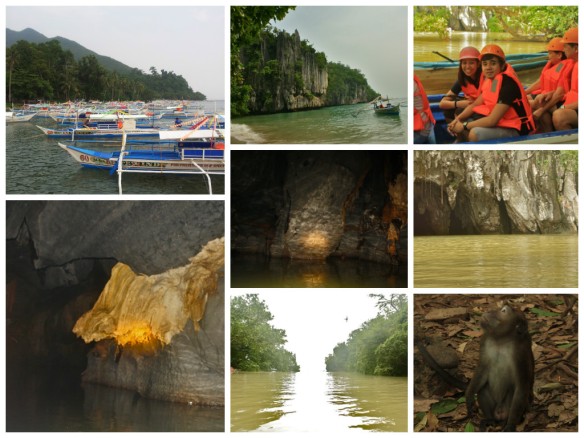 Our pick-up schedule was earlier than previous day at 6 in the morning. Since our pension house’ breakfast is served by 6, we had to request for it to be served 30 minutes earlier to avoid empty (and hence unhappy tummies) before going on with the trip to the river. Our agency, who was late the previous day, surprisingly came about 10 minutes early.

Our permit was actually for the 10:30AM batch but because we were rebooked from the previous day, I think it was kind of a strategy that we go to the site earlier than schedule before the place gets congested with people originally scheduled on that Sunday. We had to hurry eating our breakfast and brushing our teeth before we heading to the tour. It was the same tour guide as the previous day so we skipped the storytelling. He was so talkative though that he still spent during some parts of the trip, he remained chatty with my ever responsive father.

We were back at the Sabang Port around 8 in the morning. We had to wait for about 30 minutes so I had some time to take some photos of random interesting stuff in the area. Then off we were to the river via a 15-minute boat ride that our guide skillfully got us on exclusive (a boat usually carries 8 people so if you’re travelling in less than 8s, chances are you will share with other people).

As usual, it was a calming 15 minutes for me. Despite being unable to swim, I have always loved boat rides. Maybe it is the thought of being in the middle of such vastness while you rely your life on such a crude yet reliable banca. Pretty much the same feeling as being on a plane, I suppose. Except that the lovely evil that could ‘swallow’ you is so near. For this specific boat ride though, it was not only relaxing but also lucky as a sea turtle crossed our boat. I was not able to take a picture because it happened it really fast but I definitely saw it. I am not sure if that is what you can call lucky but to me, being a fan of turtles, that is definitely some stroke of luck.

Clockwise from top left :  Colorful boats to take us to the river; that lovely sunrise against that faint blue early morning skies; an attention-grabbing dog so distracted relieving himself from some back itch;  And again that lovely landscape of mountains in different shades of blue.

First to ride a boat with my happy parents!

They seem to be enjoying the ride as I do.

Upon reaching the port, we were greeted by uniformed photographers who said we should pose for some souvenir shots (one   ‘normal’ and one wacky). At first, I thought it was free but then I realized these shots are to be one of many options of photos tourists can have printed for a fee. I personally think it was not so  bad though because it was not forced on the tourists and it is not like they do not allow taking photos using your own camera. I just thought it was strange of me to even think there are some free photos. 😀

After some quick photo op, registration area was a short walk from where our boat docked. (By the way, one has to remember the boat number because you will be riding the same boat on your way back to Sabang. Lucky for us, our boat number is impossible to forget – tandararan – we were boat number ONE). After registration and a quick walk with the long-tailed macaque / ‘tsonggos’ (though to me they are all monkeys and  yes, they just loiter in the area just like humans which I find endearing), we were then asked to proceed to the area where the paddle boats and gear are. We smelled something weird but we were told not to worry because that is the natural smell that is coming from, I think, bat poop. The life vests and safety hats kind of stink too which was something that concerned me at first. However, I realized later on that it was all worth it after seeing the river. (Or maybe I just got immune to it?) 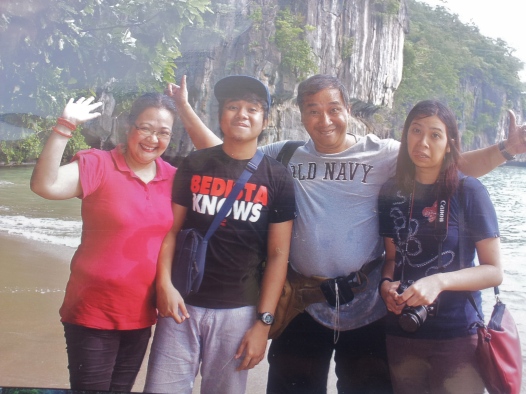 A photo of a photo we bought at the booth after the tour. And yes, this is the ‘wackiest’ we can get. 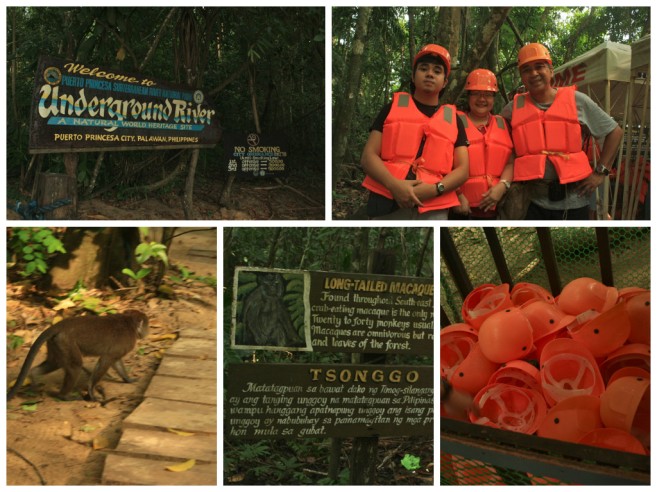 More photo op before the tour (care of those uniformed photographers again and the boat man). And there’s the mouth of the river.

There is little I know about the river prior to the tour except that it is one of the Seven Wonders of Nature and that is even unclear to me really. A quick read as I write this entry made me learn that prior to that title, the place has already been names as a UNESCO World Heritage site as early as 1999.  It is also interesting how much influence the tide has on the current inside the cave which explains why our tour the previous had to be cancelled because of strong current. True enough, the river’s current is as such as a significant part of its water is where the fresh river water meets the salty sea water.

Moreover, although I know also that only a part of the 8-kilometer river is open to public, little did I know that that passable river is only part of an entire karst is much more intricate and complicated. (This I learned from this article from a group of Italians La Venta who explored the cave a few years ago: http://www.laventa.it/documenti/recent-explorations-in-the-saint-paul-karst_96362.pdf ). We were told this also during the tour that certain areas in the cave are only accessible to researchers and hardcore cavers. I could just imagine the training and the equipment required to survive exploring a cave that is dark and unpredictable.

Our tour lasted for about 30-45 minutes back and forth the river. We were 9 in the paddle boat – 8 tourists and the boatman.  We had to assign someone who would hold the halogen lamp to point at wherever the boatman-slash-guide asks him or her to. We were told that ideally, that person should be someone short, attentive and does not intend to take photos, and so it was definitely not me. 😀 For our batch, it was a woman from that other family in our tour. She was seated at the front seat and next to her are us who were encouraged to sit in front if we intend to take photos.

Flash photography, by the way, is allowed so hurray for those who wish to capture what is inside this beauty. Take note though that you may need good equipment and flash to take decent pictures because despite presence of a lamp and the usual built-in flash, it still could be difficult to take pictures. Maybe also an added tip too that it is best to choose whether you want to take photos or just look and let it be engraved in your memory. I had that dilemma because I was so restless taking good photos. I think I appreciated the river less than I should I have if I just focused on really seeing it instead of capturing decent photos and getting frustrated with my camera. I am seriously considering going back twice – one to take photos, two to just see.

No need to worry though because it would not be as dark as most would probably expect. I personally thought it would be darker and tighter inside but then I realized that the light may have been just so strong that darkness was bearable. I was curious that I quickly glanced at the back and it gave me a creepy feeling. The boat man was right when he kiddingly said ” huwag kayong lilingon sa likod at matatakot kayo kasi may pangit” / “don’t look at the back. You’ll get scared because there is someone ugly (referring to himself)”. Nonetheless, I think it would be more exciting for the ride to have a quick (say, 5-second) total dark time. Interesting, right?

Once inside, our eyes were free to wander but I thought it best to listen to what our boatman was saying. The boatman let us know of interesting formations, markings and highest ceilings but I would not dare be a spoiler by mentioning these in detail. Here’s to share with you some of the less bad pictures I was able to take. 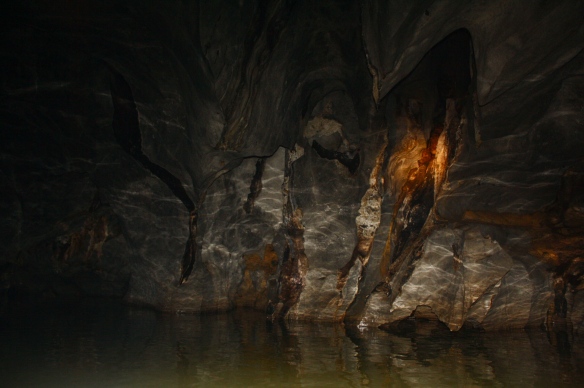 Just the thought of these formations taking millions of years gives me goosebumps. 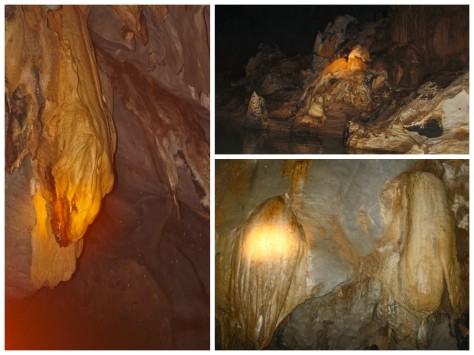 Let your eyes and imagine what these are. I would not spoil for those who haven’t gone on the tour!

And here are more!

People who left their marks before the formations were declared untouchable. 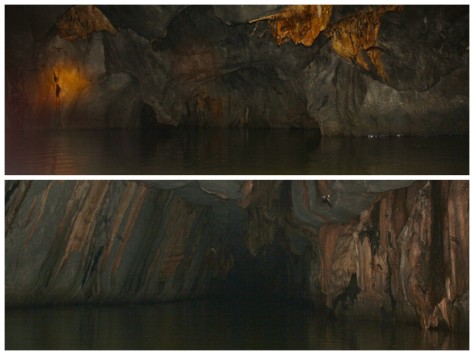 For there are areas not everyone can go to.

Unintentionally captured a photo of one of those many birds

Where the river meets the sea. And oh, hello there again, some other bird. 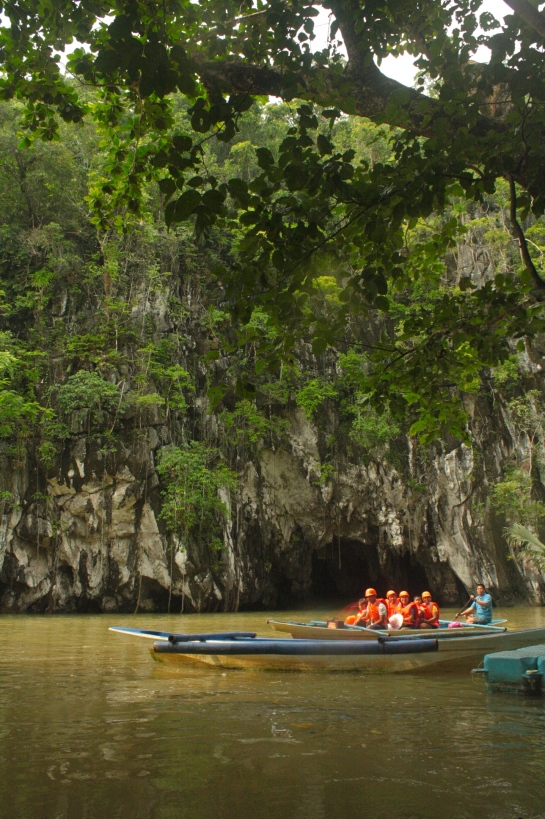 Last photo of the river before we bid goodbye. See you again! 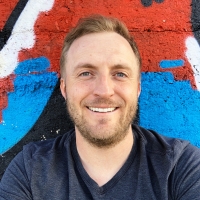